Today it is my pleasure to Welcome author Rebecca Thomas to HJ!

Hi Rebecca and welcome to HJ! We’re so excited to chat with you about your new release, The Earl’s Wager!

Thank you for having me. I’m excited to share a deleted scene with you! 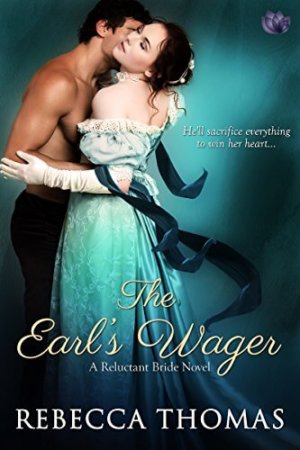 Will Sutton, the Earl of Grandleigh, believes he will be more accepted amongst English society’s upper crust by owning expensive things, like a racehorse. But good racehorses come with a hefty price tag. His brother-in-law owns a stable and offers him a deal: tutor his American ward in proper English customs, so she’ll be marriage material, and Will can have one of his horses.

The Wager seems simple until he meets Georgia for the first time. She’s disguised as a jockey, covered in racetrack dust, and she’s just run in a race!

Will Sutton is a secondary character in my Christmas novella, The Earl’s Christmas Colt. This book was so well received, I had to continue the Sutton family story. He is your typical staid and very proper English Earl. The rules and traditions of the English ways of doing things is very important to him.
Georgia Duvall is a carefree spunky American who’s been placed with her last remaining family member in England and she has to marry in order to receive her inheritance.

This is an opposites attract and fish-out-of-water story with many humorous moments. Some of my reviews have compared the story to My Fair Lady and I couldn’t be more thrilled because I did think about that story several times while writing The Earl’s Wager.

In my proposal, this was the original first scene of the book, so there is really no set-up to explain. My editor thought the next scene in the book, where Will and Oliver are discussing the race and setting up the terms of the wager as a more compelling way to start the book. I didn’t disagree, but I’ve always loved this beginning so I’m happy to share it with you today.

Giveaway: Paperback copy of The Earl’s Wager (US only)

To enter Giveaway: Please complete the rafflecopter form and post a comment to this Q: I write both contemporary and historical romance. I’d love to know which sub-genre of romance readers prefer and why?

One headstrong miss. One stuffy lord. One friendly wager. What could go wrong?

Will Sutton, the Earl of Grandleigh, believes he can save the family’s impoverished estate by investing in a racehorse, but the price is too steep. His brother-in-law offers him a deal: tutor his American ward in proper English customs, so she’ll be marriage material, and Will can have one of his horses. Maybe Miss Georgia Duvall prefers being a jockey, is obstinate and high spirited, but once she’s cleaned up and presentable, he’ll have no trouble finding her a quality suitor. She might even be quite pretty beneath the racetrack dust.

The last thing Georgia Duvall wants is to be married off to an English peer. But she won’t defy her father’s wishes, and sets her cap for the oldest lord she can find—a man who’ll die quickly and leave her alone to manage her inheritance. The Earl of Grandleigh might think he’ll teach her manners and marry her off to someone younger than eighty, but there hasn’t been an obstacle yet Georgia can’t overcome. Including a stuffy, overbearing English lord.
Book Links:

I enjoy a love-hate relationship with Alaska. I live there with my husband and sons. When I’m not reading, writing, or playing board games, I can be found taking long walks in the woods dreaming up my next story.

A reluctant reader as a child, I didn’t become interested in books until my teen years when I discovered historical romance. Now I love all sub-genres of romance and can’t decide which one is my favorite.
Website | Facebook | Twitter |