HEA Book Club Pick for May: Barefoot in the Sun by Roxanne St. Claire 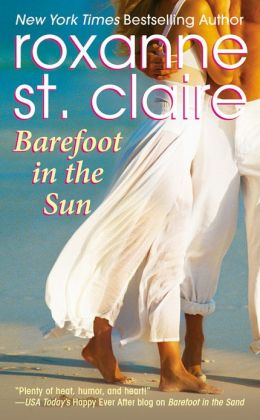 Caught between fight and flight, Zoe Tamarin has always picked flight. Since she was rescued from a nightmare childhood by her great-aunt Pasha, they’ve been on the move, never staying in one place long enough to risk exposing their precarious past. But now that they’ve reached the sun-baked shores of Barefoot Bay, Zoe may have to stay and fight-for her aunt’s life . . . and for a love she ran from years before.

Sometimes the bravest act of all is to stand still.

Oliver Bradbury came to Florida to start over, as both a doctor and a father to his eight-year-old son. He never expected life to hand him a second chance with the woman he lost years ago-but one look at Zoe Tamarin and he knows he’ll do whatever it takes to prove that this time, he can be the man she needs. But when demands of family and friendship threaten to shatter their rekindled passion, Oliver must heal Zoe’s lifelong wounds with more than hot kisses . . . but will that be enough to keep her from flying off with his heart?

Mark your calendars: The HEA Book Club Live chat for Barefoot in the Sun & Sand by Roxanne St. Claire will be held Thursday MAY 23rd at 6:00PM PST, 9:00 PM EST.

Author Roxanne St. Claire will be joining us for a Live Q&A.

Tucked into the northwestern corner of the fictional island of Mimosa Key, the area known as Barefoot Bay is one of the most beautiful, serene, and pristine beaches in Florida. Nearly wiped out by Hurricane Damien, Barefoot Bay is about to become home to a gorgeous all-natural spa and resort, called Casa Blanca. The plan is the lifelong dream of local resident Lacey Armstrong, whose grandparents were part of the 1940’s pioneers that settled this picturesque island and build a causeway from the mainland to connect Mimosa Key to the rest of Florida.

ZOE TAMARIN
(Barefoot in the Sun)

Always considered a flight risk for her lifelong avoidance of “roots” of any kind, Zoe is all things bright, beautiful, irreverent, sarcastic, and playful. Only one thing turns her serious…and wouldn’t you know it, he’s in Barefoot Bay?

OLIVER BRADBURY
(Barefoot in the Sun)

A renowned oncologist who specializes in non-traditional treatments, Oliver Bradbury came to Florida to start over, as both a doctor and a father to his eight-year-old son. He never expected life to hand him a second chance with the woman he lost years ago. But one look at Zoe Tamarin and he knows he’ll do whatever it takes to prove that this time, he can be the man she needs.

PASHA TAMARIN
(Barefoot in the Sun)

Even if her ability to read “nature’s clues” and predict the future is just part of her quirky charm, Zoe’s great-aunt Pasha is genuine in her love for the girl she saved and raised.  She’s spent most of her life on the run, and even Zoe doesn’t really know why…but the truth has to come out and when it does, many lives are affected.

EVAN BRADBURY
(Barefoot in the Sun)

Oliver’s eight year old son, Evan has a genius IQ, a love of dogs and weather, and a great need for stability in his little world. As his father works to provide that, Evan finds new friends and family (including the four legged kind) in Barefoot Bay.

Thank You GC Forever Romance for providing the HEA Book Club with 10 giveaway copies of Barefoot in the Sun!

PS: Don’t forget to drop a link to your review here 🙂

« REVIEW: Sparks Fly with the Billionaire by Marion Lennox
REVIEW: A Touch of Notoriety by Carole Mortimer »

3 Responses to “HEA Book Club Pick for May: Barefoot in the Sun by Roxanne St. Claire”