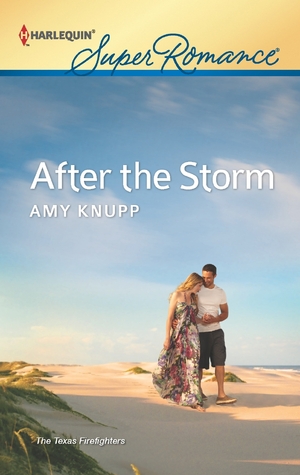 After the Storm by Amy Knupp

With a hurricane heading for the Texas coast, Nadia Hamlin needs to evacuate. Now. Before she can leave, however, there’s one more thing she has to do—despite the risk. But that delay lands her trapped in her car in the middle of the storm. Fortunately, firefighter Penn Griffin arrives. Unfortunately, her good-looking rescuer suffers a career-ending injury in the process.

The only way Nadia can think to make amends is to help Penn get back on his feet. Even if he doesn’t want anything to do with her, she won’t give up. Her determination has an unexpected impact. Because soon he can’t seem to get enough of her.

After the Storm is a romance with a rocky start but a smooth ending.

Nadia and Penn have had a hard relationship to begin with. The two times they dated the date went terribly bad. The first time she cancelled, and the second she left in the middle of the date. When Nadia finds herself trapped in her car in the middle of the storm she was supposed to evacuate from hours before, her rescuer turns out to be Penn, but unfortunately, he suffers an injury that ends his career in the process.

Nadia is consumed by her career and nothing gets bigger priority than her job, not even a personal life. But now after her decision cost Penn his career she can’t live with the guilt. She will do almost anything to make amends, even if she does have to cut some time off work to try and make amends to him.

Penn can’t forgive Nadia for her dumb decision that cost him his career. He knows that she is not directly at fault, but he can’t seem to help directing his anger at her. But the more she tries to make amends the more he wants from her.

It will take a lot of changes and sacrifices for Nadia and Penn to get their HEA. Nadia will have to find a balance and Penn will have to find a way to have more in his life. It a tough road, but these two are willing to travel it. The scenes are very intense, and the chemistry is great.

After the Storm is a book that will keep you wondering what’s next. If you like a sweet romance that does not travel an easy road but will have a beautiful and happy ending then you will definitely enjoy this book.