Dirty Secrets by Regina Kyle: When Connor agreed to let his best friends sister crash at this place he 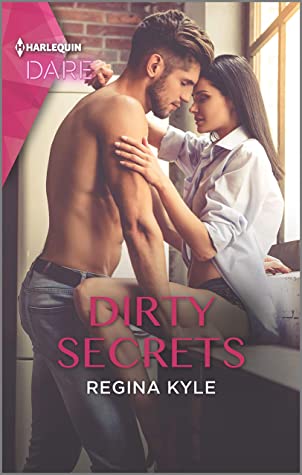 most definitely did not think that he would be opening the door to finding his own happily ever after. Brie has had a crush on Connor for as long as she can remember but to him all she has ever been was his best friends annoying little sister, but Brie is not about to let this opportunity go to waste. Now with sharing such close quarters Brie is finding it harder and harder to keep her crush on Connor under wraps, throwing caution to the wind Brie decides to see how far she can push Connors boundaries.

Soon their late night chats and cute home cooked dinner begin to give way to steamy nights together and Connor is forced to question is his relationship with Brie worth possibly losing his longest friendship as well as his business?

I can not say this enough this book was super perfect! Regina Kyle is fast working her way to my new favorite author list, I loved that she kept her story fresh and added a lot of current pop culture references into the read, this helped make this story that much more relatable. Now on to our two main characters, I loved that these two were so opposite from each other but still messed so perfectly together. Their conversation were snarky and amusing and their chemistry was undeniable. I have to say I love that Brie pushed to get the man she wanted and that she stood up for herself and was an all round strong woman. It is always nice to see an strong confident female character and this was Brie down to the tee. I really liked Connor and that we got to see his back story and the issues that he had with his father.

Overall Dirty Secret gets a big fat 5 stars from me the best friends sister trope is one of my favorites to read and Kyle has done a standout job with delivering this. This is one of those cute fast reads that I would definitely reread.

« REVIEW: More Than We Bargained For by Fiona West
REVIEW: Christmas Ever After by Karen Schaler »