Dishing Up Desire by Barbara DeLeo is a sweet, yet slightly spicy romantic read. Thirty-four year old celebrity chef and domestic goddess Kirin Hart has been living a nightmare for the past year. Her integrity and wholesomeness took a huge hit when she was wrongly sued by an employee ten years her junior for sexual harassment. Her life has become a media circus and as a result, she has 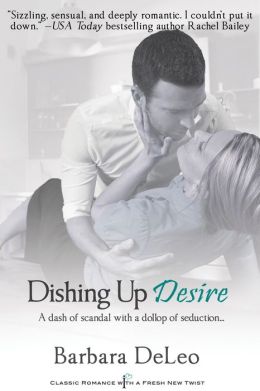 become hardened and difficult to deal with. She is now in debt and her public image is in the gutter. The multimillion dollar empire that she and her late husband created, “Cooking with Hart” is in danger of crumbling. Kirin needs a complete makeover; heart, body and soul.

Former model Blake Matthews is the best Public Relations and Image Consultant in the business. Everyone and everything he touches turns to gold. Once he acquires the prestigious firm of Dent and Douglas, (D&D), his conglomerate will be complete. However, Kirin Hart is their client and her unwillingness to cooperate is causing the upstanding reputation of D&D to go down the tubes. They will not sell him the company until D&D’s reputation is back on track. Blake has been given two weeks to change Kirin’s image and prove to D&D that he can maintain their high quality of services.

Due to a tragedy in Blake’s childhood, it is difficult for him to form and maintain personal relationships of any kind. Thus, he doesn’t have any close friends and has never been in love.

Kirin and Blake do not hit it off at first. It is difficult for Kirin to trust anyone and Blake is no exception. However, between his good-looks, sound advice and public image knowledge, he is slowly gaining her confidence. Spending so much time together naturally causes feelings to develop and cultivate. They begin to transform each other while sharing secrets, dreams and hopes.

If you are looking for a quick sexy read with good story development, get this book.

Image consultant Blake Matthews is facing his toughest PR challenge yet: salvage the image of celebrity chef Kirin Hart. Once he does, he’ll be able to acquire LA’s most successful PR firm. But Kirin’s no easy fix. She’s stubborn about changing her comfortable homemaker image, and is being sued for sexual harassment by a junior staffer. She needs a PR lifeline fast. Only problem is Blake wants more than to make her over…

Kirin doesn’t need a makeover–her fans love her as she is. But she could lose everything if the sex scandal and reputation that has followed doesn’t get quashed right away. Kirin agrees to let model-perfect Blake work his magic for two weeks, but things get complicated when she can’t deny the way her body flares to life whenever he’s near.