In On Second Thought by Kristan Higgins, Kate made it to her late thirties 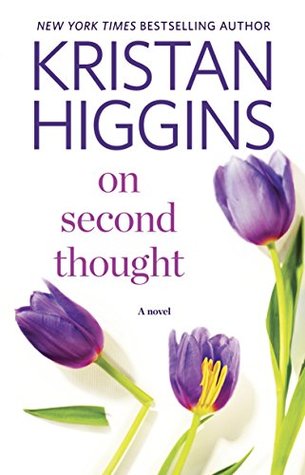 successful in her photography business but highly unsuccessful in her love life. Then she met Nathan, a geek-chic architect, and they were both instantly smitten. It always seemed a little too good to be true to find love at nearly forty years old, but Kate spends four blissful months as Nathan’s wife before tragedy strikes. When a freak accident kills her husband, she’s emotionally devastated. So when her half-sister Ainsley needs a place to stay after her life is also shattered, she hops at the chance to have her move in, not realizing it’s the best thing she could have ever done for them both.

‘It was funny how time is measured after you’ve lost someone. Everything relates back to that second your life swerved. The calendar isn’t measured by the names of the months or seasons anymore, but by those significant dates.’

Ainsley will admit she was a bit uncomfortable asking her sophisticated older half-sister Kate if she could move in for a while but she’s determined to make it work. Especially considering she has nowhere else to go after her longtime boyfriend Eric breaks up with her, in a very public manner no less, and asks her to move out. Okay, so Ainsley knows both she and Kate are a hot mess. But this is a chance for the two of them to finally get to truly know each other and hopefully create the type of bond that sisters should have. As long as they’re there to prop each other up, Ainsley knows they’ll be able to move forward toward a more positive future.

‘My sister needed me. Whatever I was going through, Kate had it worse. In the thirty-two years I’d known her, I’d never seen her lost before.’

Now THIS is how women’s fiction should be written. Kristan Higgins always manages to spin a tale that has me almost in tears one minute and then chuckling the next–and I love that–but On Second Thought took it to a whole new level. The emotions were deeper, the characters more complex, and the experience that much richer for it.

“I felt like I was cheating on him,” I went on. “Because I’d had a nice day. Had dinner with a friend, who’s a good-looking guy.”
“So no nice days for the widow. And you have to ditch all your good-looking friends. Got it.” She cocked an eyebrow at me. “You think Nathan would want you to be miserable? Don’t you think he feels guilty enough, dying and leaving you alone? Get real, Kate. If you have a good day, grab onto it.”

Already being a fan of Higgins’ work, I admittedly started this book with high hopes. And not only did she not disappoint, but she exceeded my every expectation. On Second Thought will be a very relatable book for readers. It was written in an honest manner with flawed, charming characters you can’t help but empathize with and situations that will in some way touch every reader’s life at some point. Some of the scenes after Kate lost her husband were gut-wrenching and so sad that my heart went out to her and the same for Ainsley over the way her longtime boyfriend broke up with her. But I loved that in all the sadness and coming to terms with the massive changes in their lives, the sisters managed to band together in their own unique way and lean on each other emotionally for the first time in their history.

Aside from the wonderful writing and the touching story itself, what stood out to me was the character growth here. It’s of course a big part of women’s fiction but it felt like we watched nearly every character involved in the storyline grow and change in some way. (Mostly for the better.) I loved seeing Ainsley learn that it was okay to make herself a priority every once in a while and that she could still be the caring, people-pleaser she had always been. Just more balanced. And Kate’s sudden loss, which jarred her emotionally, eventually paved the way for her to believe that she deserved to be happy and that things would work out as they were meant to. It was a tough journey for the sisters, but I so enjoyed watching them finally understand each other and create a bond that would last the rest of their lives.

With every emotion imaginable woven in, On Second Thought was an intimate look at two sisters learning to lean on each other at a tragic time in their lives and redefining their relationship along the way. Fans of women’s fiction and romance will be equally thrilled with this heartfelt novel.

Following in the footsteps of her critically acclaimed novel If You Only Knew , multi-bestselling author Kristan Higgins returns with a pitch-perfect look at the affection—and the acrimony—that binds sisters together

Ainsley O’Leary is so ready to get married—she’s even found the engagement ring her boyfriend has stashed away. What she doesn’t anticipate is for Eric to blindside her with a tactless breakup he chronicles in a blog…which (of course) goes viral. Devastated and humiliated, Ainsley turns to her half sister, Kate, who’s already struggling after the sudden loss of her new husband.

Kate has always been so poised, so self-assured, but Nathan’s death shatters everything she thought she knew—including her husband—and sometimes the people who step up aren’t the ones you expect. With seven years and a murky blended-family dynamic between them, Ainsley and Kate have never been overly close, but their shared sorrow dovetails their faltering worlds into one.

Despite the lifetime of history between them, the sisters must learn to put their differences aside and open their hearts to the inevitable imperfection of family—and the possibility of one day finding love again.

« REVIEW: Tell me True by Ally Blake
REVIEW: The Husband She Can’t Forget by Patricia Forsythe »

16 Responses to “REVIEW: On Second Thought by Kristan Higgins”