In One Year Home by Marie Force, When Navy SEAL Captain John West was deployed for an unknown 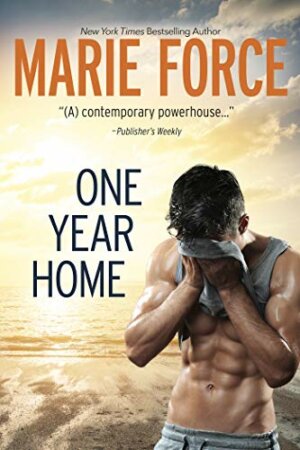 length of time to bring down a terrorist half a world away, he couldn’t tell his then-girlfriend Ava anything about it or risk his career. Six years later, John is home, but has lost damn near everything–even though his mission was a success. Deemed a hero, he’s at a loss as to how to carry forward without his Ava, let alone after losing part of his leg in the mission. John’s life gets increasingly complicated with the media clamoring after him, so he takes Ava’s suggestion and hires her new sister-in-law, a PR specialist, to help. Talk about awkward. But after some tense moments to begin with, John is in awe of Julianne Tilden’s professionalism–and her refusal to take his crap. It’s when his feelings begin to get more personal in nature that he knows they’re in for a wild ride. One he’s not sure either of them are ready for.

‘I gave more than six years and half a leg to bringing a ruthless terrorist to justice, and what do I get as a thank-you? The rest of my life without the only woman I’ve ever loved.’

Julianne wasn’t quite sure what to expect when she agreed to work with John, but she knows it will it be a huge boost to her career. She’s also honored to get to work for a hero who sacrificed everything for his country. Although she’s surprised by how cranky and resentful he is at first. Jules knows that if he wants to go on a media tour, he’s going to have to come out of his funk and prepare for the onslaught. She eventually gets through to John that she’s there to help him, not make his life more difficult. But as she begins to see a whole other side to him, the wonderfully charming, kind man who Ava fell in love with years ago, she’s pretty sure she’s heading down the same path. And given their convoluted lives, with her brother Eric now being married to Ava, Jules will have to be sure of her feelings before she decides to give things a try with John, knowing the backlash it will cause.

‘I want him to go back to being an asshole. I could handle that guy. This guy…I’m utterly defenseless against the humble, vulnerable, wounded warrior who’s slowly but surely wrapping himself around my heart.’

Simply put: One Year Home made my heart happy. Through all of the ups and downs, angst and darkness, unexpected love and insurmountable odds, this powerful novel pulled at my heartstrings and left me breathless.

“Before I met you, I was drowning. Since I met you, I feel alive again, and the only thing that’s changed is *you*. You showed up and made everything better. Can you blame me for wanting more of the person who did that for me?”

I have been waiting for this sequel since reading Five Years Gone–which, by the way, broke my heart into pieces and put it back together by the end. The setup for One Year Home, just knowing that wounded warrior John would have an incredible amount of healing to do: physically, emotionally, and mentally…well, I knew this would be a tough book to get through. But also knowing Marie Force’s emotionally-driven writing, I knew it would be meaningful and worth every tear shed. And it so was.

The complexity of the situation John, Julianne, Ava, and Eric found themselves in made for a page-turning experience. Particularly since it was told from all four alternating perspectives. There’s something about how genuine Marie Force creates her characters that makes me want to root for each and every one of them, so in this case it was tough to see how she would make it all work out for them. Because, seriously. This was one mixed up, tangled mess. It seemed there was no way everyone would have a HEA–but trust Force and her process. It *did* happen and in a way that was fitting and seemed realistic as well.

Now, I have to say, John West…oh my goodness, what a terrific guy he was. Completely fallible but still utterly heroic, he’s the kind of character I simply can’t resist–and I couldn’t help but cheer him on through every obstacle he faced. His struggles will be difficult for some sensitive readers, as we found John in a very, very dark place at the beginning of this novel. And it took some time for him to come to terms with his new reality. But watching how strong he was in so many ways was inspiring, and I loved how Force showed all the aspects of his journey, whether he was triumphant or in the depths of despair.

Our sweetheart of a heroine Julianne, or Jules to friends/family, really impressed me. She was a bit of a people-pleaser and was super compassionate and exceedingly giving. However she did have a steel backbone, which showed when she met John and he gave her attitude right away. I loved that!! Jules didn’t back down and that was the start of it all for them. She used just the right mix of gentleness and tough love tactics with him to be supportive without coddling him and I think John appreciated Jules for it. She made a couple of choices toward the end that might seem rather quick to some readers, but I think if you take into account everything they both had been through in their lives–plus the fishbowl they found themselves in with his media tour–I think Jules and John followed their own unique path perfectly and I applaud them for it.

One Year Home was a prime example of Marie Force’s realistic characters and compelling storytelling. An important novel about healing, inner strength and conviction, loss and new beginnings, I think readers will be impressed with this poignant story.

John
I have no idea how to survive without my beloved Ava. She had no choice but to move on with her life during my six-year deployment and has now married Eric. I hate him for taking her from me. I’d prefer to wallow in my depression and heartbreak, but the whole damned world wants a piece of the SEAL Team leader who helped capture the world’s most-wanted terrorist. I need help handling the relentless requests, and when Ava sends her new sister-in-law to manage the media circus for me, I’m prepared to hate her on principle. Her brother took my Ava. What else do I need to know about her?

Julianne
It takes five seconds to realize Ava’s ex is going to be the most complicated and difficult client I’ve ever had, but the opportunity to represent the most celebrated man in the world could make my career. I’m determined to do the job, even if I dislike John from the moment I meet him. And I like everyone. So much so that my brothers worry about me being exploited by those who would take advantage of my unwavering love for others. But John… He’s in a class by himself, and his bitterness is a festering wound that I begin to wish I could somehow fix for him. The more time we spend together, the more our mutual disdain morphs into something that feels an awful lot like desire. There’s no way I can want this man, or so I tell myself, and when Eric finds out I’ve developed feelings for the man causing trouble in his new marriage, well…
That’s going to be a hot mess.
The hotly anticipated follow up to Five Years Gone is here!

12 Responses to “REVIEW: One Year Home by Marie Force”