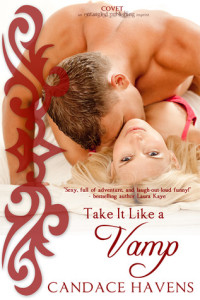 Vampire Nick Christos might’ve been born in the Middle Ages, but the good old days seem tame compared to the last eight years he’s spent ruling the Supernatural Council. His only respite is with his cute neighbor Casey Meyers, a woman he wants more than any undead man should. Sure, he’s forced to take a cold shower after every encounter, but there’s no way he’ll test his own strength by getting too close to a human, and he’s not willing to risk her life–not with bloodthirsty family on the prowl out to ruin Nick’s life.

When said Nick’s kin shows up, the innocent Casey is caught in the middle of a centuries old fight, and Nick’s biggest fear is realized. Now, instead of keeping his hands off his neighbor, he’ll risk everything to save the human he’s come to love.

Take It Like a Vamp was an interesting book. Nick, a werewolf turned vampire is trying to keep his irresistible next-door neighbor out of his dangerous world but as you can imagine he isn’t very successful.
Casey never thought a man like Nick could ever find her attractive but as time progresses she begins to notice that he has feelings for her. The catch is that Casey doesn’t know that vampires exist.

Throughout this book the reader was constantly reminded of the fact the Casey couldn’t believe that a hot man like Nick could ever like her, I prefer the female lead characters to like themselves a little more than Casey did in this book. Also I feel as if Take It Like a Vamp didn’t get going till the end of the story. If I could change one thing about this book it would be that.

But other than those few things that I didn’t like I found Take It Like a Vamp to be quite enjoyable. Nick was my kind of man, tall, mysterious and handsome! As a couple Nick and Casey had a very realistic relationship, well other than the vampire part 🙂

There was plenty of steam involved in their sexual relationship, to the point where they completely destroy a room in the heat of the moment, whoa baby!

If you like your stories with a little extra bite, and some extra H-O-T sex scenes then I seriously recommend that you give Take It Like a Vamp a try.