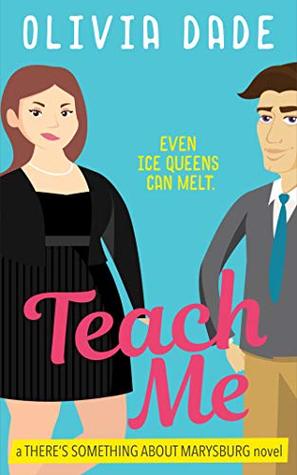 Marysburg, with everyday people taking a chance on love.

For Rose Owens, teaching world history at Marysburg high school is the joy in her life that keeps her going after a disastrous marriage that threatened to rob her of her self confidence. She’s learned to keep her real feelings about things to herself and always portray a polite, friendly but distant demeanor. This has worked especially well with the misogynistic senior school administrator Dale who knows her poorer upbringing and never hesitates to flaunt that knowledge. Well, now he’s gone and thrown another wrench into her carefully ordered life, by bringing in another teacher and giving the new guy some of her favorite classes. It won’t just impact Rose, it will also impact the students who would have followed her onto higher level classes, and ultimately the funding for that education. It’s a blow to Rose, but one she’s determined to keep hidden.

For Martin Krause, a job teaching history at Marysburg high is a blessing, keeping him close to his daughter Bea who had moved to Marysburg with his ex-wife before she figures out which college she’ll go to next fall. His new colleague Rose is somewhat chilly towards him, though it’s not until later in the term that he realizes the full extent of the rug that was pulled out from under her when he got some of the classes she would normally be teaching. Still, she’s an unfailingly polite and helpful colleague as he learns his way around the school and the students.

Martin is attracted to Rose but it’s quickly evident that she’s not interested in pursuing any kind of relationship other than a professional one. Yet, when Martin gets sick, it’s Rose who comes to his rescue. And the woman she is when her guard is down is funny, sarcastic, and wholly charming. Martin’s never been a Lothario – most people think he’s staid and boring. But Rose is able to draw out his quietly humorous side too and seems to appreciate him just the way he is once she gets to know him. Can this mid-forties couple, burned at love the first time around, get a second chance together?

This is a delightful read from start to finish. You feel empathy for both Rose and Martin in the situation that makes them colleagues, for better or worse. Rose can’t show her real feelings about Martin having been given her favorite classes to teach – she knows it’s a way for Dale to try to stick it to her for her having rebuffed his personal advances and she knows it’s not Martin’s fault that he’s been put in the middle. So she aims to be professional though it’s not long before Martin’s friendly overtures start to break down her defenses. As for Martin, he feels equally bad when he discovers Dale’s manipulations but he needs the job and he is a really good history teacher. As much as he is able, he’ll try to make sure that Rose’s students aren’t the losers in this situation as he can see how much they mean to her and the lengths she’ll go to to give them the chances to excel.

As Rose and Martin get to know each other as workplace colleagues, certain circumstances come about that help them see each other in a more personal light. They both have experienced heartache and emotional bullying, in Martin’s case from his father and brother and in Rose’s case from her ex-husband. It’s made them wary of putting themselves out there to get hurt, yet Martin is brave enough to take that chance first. Eventually Rose can’t resist his slow but persistent wooing. They share some very sexy love scenes and intimate conversations but Rose insists on keeping their relationship quiet, not wanting to give Dale more fodder to harass her. In contrast, Martin wants the woman he’s with to be as proud of him as he is of her. It makes things a bit rocky for them but Rose soon realizes she’ll have to be willing to put her heart out there or she could lose Martin for good.

There’s so much to enjoy about this romance. Older ‘real’ feeling characters of realistic body sizes; Martin’s evolving relationship with his soon to be adult daughter Bea; Rose’s delightful relationship with her in-laws who treat her a far sight better than her ex-husband ever did and didn’t abandon her in the divorce; the school environment and Rose’s relationship with her students; laughs and tears as Rose and Martin realize just how good they could be together. I can’t wait to read the next in the series!

Their lesson plans didn’t include love. But that’s about to change…

But keeping her distance from a man as warm and kind as Martin will prove challenging, even for a stubborn, guarded ice queen. Especially when she begins to see him for what he truly is: a man who’s never been taught his own value. Martin could use a good teacher–and luckily, Rose is the best.

Rose has her own lessons–about trust, about vulnerability, about her past–to learn. And over the course of a single school year, the two of them will find out just how hot it can get when an ice queen melts.

« REVIEW: The Secrets We Bury by Debra Webb
REVIEW: Flare Up by Shannon Stacey »

4 Responses to “REVIEW: Teach Me by Olivia Dade”