In The Surgeon’s Cinderella by Susan Carlisle , Tanner Locke needs to find the right woman, but their relationship will be nothing more than a marriage 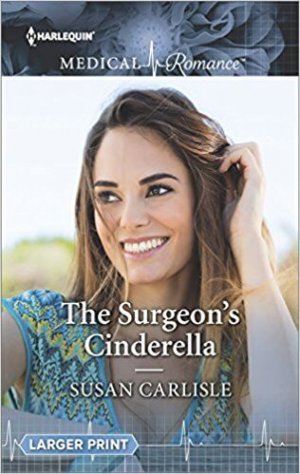 of convenience, if Tanner decides to propose like he wishes to in hopes of securing a promotion. However, none of the women that matchmaker Whitney Thomason has set him up with seem to work, so he decides Whitney herself will be perfect to help him convince his boss that he’s in a committed relationship. Can Whitney show Tanner that there’s no reason to be so cynical when it comes to love and relationships, or will both their insecurities be their undoing?

“Hey, Tanner,” the kidney team surgeon said after a tap to his arm, “who was the woman you were talking to? Did you have to break a hot date?”
He shrugged. “Just a woman I met.”
“You know one day you’re going to have to settle down. Hospital boards like to have their department heads going home to a family at night. I’ve got a friend of a friend with a sister. Pretty, I heard.”

With a name such as The Surgeon’s Cinderella, I was actually thinking this story was going to have a rags-to-riches storyline, but that wasn’t the case. Guess I can’t judge a book by its cover or its title, as I did with this book, because although Whitney has some similarities to Cinderella such as the description of her clothes being unflattering from the hero’s point-of-view, she also has some disparity to Cinderella like being a successful match-maker and having a wonderful family that would do anything for each other.

Right from the beginning, this story was captivating, fast-paced and I loved the moment the hero and heroine came face-to-face for the first time, because of the way the hero takes Whitney by surprise and is very demanding in what he wants when it comes to finding the right woman for him. Really, the hero was intense just like the dialogue, and I could understand why the heroine reacts the way she does when it comes to the hero’s demands, as it’s not her usual way of handling her clients. It doesn’t help that Tanner throws her off-balance, because of their past connection. Does he remember who she is? Since she’s so different to the girl she was when she knew him in the past.

”You can’t just demand that I spend the weekend with you.”
“Sure I can.” His voice had turned hard. “We have a contract for services and you need to hold up your end. It was your suggestion that I pick Rachael. She didn’t hold up her end so that defaults to you.”

Both the main characters had me hooked due to their back stories, because they’re so different with Whitney knowing what a good relationship is with both her parents and grandparents still married after so many years and Tanner not knowing because his parents relationship was very dysfunctional, so it’s understandable that Tanner wants nothing to do with love and has certain requirements that the woman he marries have. Yet, despite the hero being so against love, I enjoyed how his interactions with Whitney turned everything around for him and when he finally learned the truth about his parent’s relationship, it made him realize that what his father tells him about love and life is true.

While Whitney, she has her own insecurities when it comes to her image and she’s come a long way since she was teased about how she once looked. She’s done so well to get over that period in her life, and yet, it’s hard to overcome when there are still people that don’t know how to be nice when it comes to other women. However, in saying that, I liked how she manages to overcome her issues by taking on the role she decided to take. Also, I liked how kind and caring Whitney is and how she manages to brighten the day of other people, especially when they’re not at their best and I loved the growing bond between her and one of Tanner’s patients.

Overall, Ms. Carlisle has delivered a wonderful read in this book where the chemistry between this couple was strong and there from the moment they met. The way this story ended left me with a big smile on my face, because of what Tanner does to win Whitney back. Who knew he could be so devious? Then again, it’s a solid plan that was bound to work as the heroine takes her job very seriously and would do anything to succeed in matching two people forever. However, it was the epilogue that wrapped this story up perfectly, as readers discover how far Tanner and Whitney have come in their relationship and I loved the advice Tanner’s favorite patient gave the pair right at the end. I would recommend The Surgeon’s Cinderella by Susan Carlisle, if you enjoy medical romances, the matchmaking trope or books by authors Lucy Clark, Dianne Drake or Sue MacKay.

Whitney Thomason prides herself on being able to find the perfect partner for anyone, but heart surgeon Tanner Locke is a real challenge! He wants to settle down, but he’s adamant there’ll be no falling in love…

When Whitney’s candidate falls through, it’s up to her to be the girlfriend Tanner needs for his weekend business getaway, but two days in close proximity proves torturous. They know giving in to temptation is a bad idea, but desire is more powerful than reason…

3 Responses to “REVIEW: The Surgeon’s Cinderella by Susan Carlisle”