In Under the Table by Stephanie Evanovich, When Zoey Sullivan made the decision to separate from her 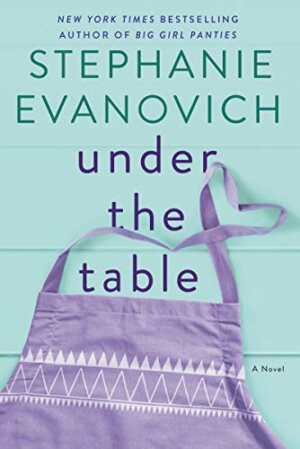 husband Derek and move, possibly permanently, from Ohio to New York City, she never thought she’d trade her domestic drama for watching her older sister Ruth’s personal soap opera unfold as they became roommates. But at least it’s given Zoey time to gain some perspective. She’s still figuring out if what she and Derek have is salvageable or not, but in the meantime she’s created her own small business as a caterer. Something she’s always wanted to do and certainly has a knack for.

The things they held in common vastly outnumbered their differences. The words tumbled from her mouth.
“Tristan, I’d like to think you consider me a friend. And it looks like you could sure use one. I think I can help you, if you’d let me.”

It’s a catering job that puts Zoey in touch with wealthy homebody Tristan Malloy. At first glance he’s a computer geek with a penchant for cleanliness and playing golf. And he has the most atrocious wardrobe she’s ever seen. But the more Zoey spends time with her new friend, the more she realizes she could help Tristan make just a few tweaks to his appearance and he would surely have the ladies swooning. With a lux apartment, the heart of a gentleman, and the looks of a geek-chic model, Zoey is almost unwilling to show Tristan off in public, realizing how much she has begun to care for him herself. A sudden reappearance of her ex just throws a bunch more confusion into the works until Zoey has some major life-changing decisions to make.

‘She didn’t need to hold his hand through every step of his journey. The only flaw in that logic was that she very much wanted to hold his hand. And kiss his full, sometimes pouty lips. And rip off all the fancy new clothes she helped him acquire.’

Accurately described as “a modern twist on My Fair Lady”, Under the Table was an oftentimes humorous, definitely heartfelt look at two people so right for each other that they couldn’t see it right in front of them until it was nearly too late.

“You are so beautiful,” he told her tenderly, each word perfectly enunciated, “in every way.”
He sounded sincere, which only served to embarrass her. False flattery she could handle. There was nothing false about Tristan.

Set mainly in New York City with all its energy and diversity, Under the Table was a book that I simply devoured. I will say that the hero and heroine might not be everyone’s cup of tea, seeing that they are basically betas, not alphas. Now there were times when Zoey or Tristan stood up for themselves or others, but they were genuinely *nice* people who would rather get along and be do-gooders than to argue and make a scene. And I personally appreciated seeing them portrayed that way and for Stephanie Evanovich not having them apologize for who they were as individuals.

I was admittedly worried about Zoey still technically being married while she was falling for Tristan. However, without giving too much away, her separation from her husband was real and had been so for nearly a year when she met Tristan. I really liked their chemistry together. They were seriously cute as friends, let alone when it got romantic. And I thought Zoey’s upstart business as a caterer was a fun addition, fitting her abilities and personality perfectly. My one downfall with her was a decision she made at the end of the book. Boy it had me mumbling a few choice words under my breath. Zoey did make things right after coming to her senses, but it was some tense reading moments there for a while…

Tristan becoming a client of Zoey’s was fate at its finest, throwing them together so they could learn how much they had in common in an organic way. And Tristan was just ridiculously adorable, almost a throwback to an older generation thanks to his unique upbringing. He was kind, genuine, chivalrous, but still sexy (especially after Zoey’s help in the clothing department) and had a tiny bit of a bad boy wanting to get out. I’ll just say that thanks to Zoey and Tristan’s hilarious and sometimes steamy moments together, Rock Band (the video game) and golf courses will never be the same for me again. (lol)

An absolute treat to read, Under the Table will be sure to entertain and keep readers smiling with the crazy antics of this likable cast.

The New York Times bestselling author of Big Girl Panties puts a modern twist on My Fair Lady in this funny, romantic confection in which a canny young woman makes over her awkward millionaire client . . . with some hot, sexy, and surprising results.

Suffocating in a dead-end marriage, Midwesterner Zoey Sullivan fled to New York and moved in with her older sister Ruth, a carefree, vivacious beauty with a string of eligible bachelors at her beck and call. Giving herself three months in the city to clear her head and find a direction, Zoey dodges calls from her ex Derek, and distracts herself by cooking and catering a few private dinners and parties. Pursuing her passion for cooking was never an option when she was with Derek, and now Zoey relishes her independence.

When Zoey’s meets reclusive millionaire Tristan Malloy, she’s blown away by his kitchen—a marble and stainless steel temple worthy of the culinary gods—and charmed by his impeccable gentlemanly manners. But despite his firm body, handsome looks, and piles of cash, Tristan—a computer programmer—is shy and more than a little socially awkward. Zoey is sure that Tristan has all the right raw ingredients—and she’s the right person to spice them up turn him into a delectable dish.

But Zoey’s unprepared for just how well her makeover works. Tristan turns out to be even sexier once he’s gained a little confidence and the right wardrobe. Beneath the gorgeous package, Tristan is a great guy who deserves a woman who really appreciates him. Slowly but surely, Zoey realizes she may have found her perfect match—but does Tristan even know how her feelings have changed? Is that warm look in his eyes gratitude for the new and exciting world she’s ushered him into, or something more? And what will happen when Zoey’s ex comes to town, looking to win her back?

6 Responses to “REVIEW: Under the Table by Stephanie Evanovich”