Today, HJ is pleased to share with you Nalini Singh new release: Allegiance of Honor. 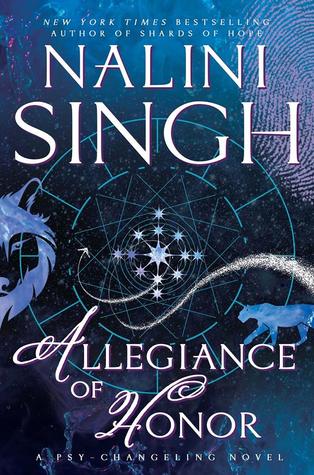 A staggering transformation has put the Psy, humans, and changelings at a crossroads. The Trinity Accord promises a new era of cooperation between disparate races and groups. It is a beacon of hope held together by many hands: old enemies, new allies, wary loners.

But a century of distrust and suspicion can’t be so easily forgotten, and it threatens to shatter Trinity from within at any moment. As rival members vie for dominance, chaos and evil gather in the shadows and a kidnapped woman’s cry for help washes up in San Francisco, while the Consortium turns its murderous gaze toward a child who is the embodiment of change, of love, of piercing hope: a child who is both Psy…and changeling.

To find the lost and protect the vulnerable—and to save Trinity—no one can stand alone. This is a time of loyalty across divisions, of bonds woven into the heart and the soul, of heroes known and unknown standing back to back and holding the line.

But is an allegiance of honor even possible with traitors lurking in their midst.

Read an excerpt from Allegiance of Honor:

Lucas had had to chase Naya around the aerie at bedtime last night—her walk might still be a little shaky, but she was a rocket when it came to crawling. Dressed only in a diaper, she’d laughed uproariously and said a loud, firm “No” each time Lucas caught her and put her in her crib.
After which she’d clamber out—she’d figured out how to escape a month earlier—and the game would begin again. Of course, since Lucas was a cat, he’d been having just as much fun as their daughter. Sascha, meanwhile, had sat in the living room with a cup of hot chocolate and just indulged in the sight of her mate playing with their cub.
She’d had to pretend to be stern when Naya ran over and pleaded her case with loud sounds and wild gesticulations of her hands. “No, Naya,” she’d said, biting her tongue in an effort not to laugh. “It’s time for bed. Go with Papa.”
At which point, Naya had growled at her, eyes sparkling with mischief.
And Sascha had cracked, laughing so hard she’d had to put down her hot chocolate before she spilled it. Lucas had shaken his head as Naya plopped down on her diaper-covered butt and joined in, clapping her hands at having made her mommy laugh. “No discipline.” Lucas had mock-growled at her before picking up their misbehaving baby. “And you”—a growly nuzzle that made Naya laugh harder and pat his stubbled cheek—“time for bed.”
He’d finally got her to sleep—by walking around with her pressed up against his bare chest.
Today, their cub was playing in the living area just outside the kitchen nook. Sascha had locked the aerie door to ensure Naya wouldn’t undo the latch and go out onto the balcony, and Lucas had childproofed the entire main area of the aerie, so Naya was free to roam as she liked. A lot of the time she practiced her walking skills. And no matter how often she fell down, she started back up again after a little break.
Stubborn, determined baby.
Peeking out from the kitchen, Sascha found her concentrating on stacking the colored alphabet blocks Faith and Vaughn had given her as a gift. Beside her sat a more than slightly ragged wolf plush toy, aka “The Toy That Shall Not Be Named.” Hawke had given that to Naya when she was a newborn, and it remained her favorite snuggle toy, much to her father’s despair.
Though Lucas did enjoy it when Naya went leopard on the toy, growling and “fighting” with the wolf. Then he’d smile and say, “That’s my girl.”

Giveaway: Print copy of SLAVE TO SENSATION + VISIONS OF HEAT and a Psy-Changeling-branded mug (US)

To enter Giveaway: Please complete the Rafflecopter form and post a comment to this Q: What did you think of the excerpt spotlighted here? Leave a comment with your thoughts on the series/book…

Nalini Singh is the New York Times and USA Today Bestselling author of the Psy-Changeling, Guild Hunter, and Rock Kiss series. She lives in New Zealand but travels as much as possible (the travel bug bit hard from when she escaped working as a lawyer to run away and teach English in Japan). Nalini loves to write, loves to read, and thinks chocolate is a food group.
Find out more about Nalini at www.nalinisingh.com. Make sure to join her monthly newsletter to receive exclusive updates, free short stories and more!

40 Responses to “Spotlight & Giveaway: Allegiance of Honor by Nalini Singh”