Today it is my pleasure to Welcome author Kate Hewitt to HJ!

Hi Kate and welcome to HJ! We’re so excited to chat with you about your new release, Christmas at Willoughby Close! 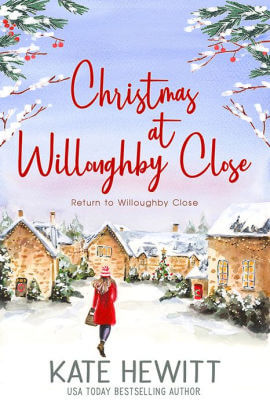 Two lonely hearts dance their way towards each other!

I like everything Roger says, pretty much. But I particularly like what Lindy says to him about love:

“Let me love you. Don’t turn away from me now just because it’s hard or scary or uncertain, because I get that. I know it’s all three, and I’m still here.”

All of the Willoughby Close books are inspired by the village I used to live in. As I get older, I find myself wanting to write older characters, people with scars and memories and hopes. Lindy and Roger are inspired by that desire.

I loved writing Roger, because he is socially awkward but he knows it. I wanted readers to relate to him in a way you might not to if you met him in real life, by being inside his head. As I wrote Lindy, I found that she was less confident and more vulnerable than I expected. I knew Roger needed her, but I didn’t realize until I wrote the book that she needed him!

I love the scene where they meet, because it is in Roger’s point of view. Here is his first sight of the heroine Lindy:

He turned at the sound of a voice he recognised, husky and rich—the voice of the woman on the phone, the proprietor of the school. She came towards them with a wide smile, and Roger blinked at the sight of her.
She was at least six feet tall, if not a little more, and nearly his height in the pink platform shoes she was wearing. She’d matched the shoes with an even more outrageous outfit—a poodle skirt in hot pink satin, cinched tight at the waist, with a white silk blouse tucked into it and unbuttoned enough to reveal a generous portion of her even more generous cleavage. Roger, somewhat inexplicably, felt himself blush.
Her hair tumbled halfway to her waist, a rich golden brown, and there was something so impossibly sensual and earthy about her that she seemed to take up all the air in the room. Certainly he seemed to be having trouble remembering how to breathe.
“Rog?” Ellen asked a bit anxiously. “Are you all right?”
He cleared his throat. “I’m fine,” he said tightly. He nodded at the woman standing in front of him, still taking up too much air.
“Pleased to meet you. I’m Belinda Jamison, but everyone calls me Lindy.”
“I’m Roger Wentworth,” he responded somewhat mechanically. “As you must know, since you just said it.” Her eyes, a bright blue green, seemed to be laughing at him. No doubt she was remembering how idiotic he’d sounded on the phone, blustering on about how he wasn’t interested in learning to dance. Whenever he was nervous, he became pedantic. Even aware of this weakness, he seemed utterly unable to amend it.

Writing Roger’s point of view was both wonderful and difficult because he is such an awkward person! As things get romantic, it was challenging to find the right balance between awkward and exciting:

It wasn’t until she’d opened a first aid kid and the pungent smell of rubbing alcohol stung the air that Roger came to himself enough to say, “This isn’t necessary. I’m perfectly capable of tending to my own injuries—”
“I know you are.” Lindy gave him an impish smile as she held an alcohol-soaked piece of cotton wool. “But let me? I feel bad enough as it is. I think I tripped you up accidentally, and I’m meant to be the expert here.”
He took in her teasing smile with a feeling of confusion. On top of his throbbing cheek and smarting eye, he couldn’t process this conversation—or Lindy’s intent. “As you said,” he managed, “accidents happen.”
“So they do.” She leaned forward, close enough so he could breathe in her scent again—yes, it was vanilla—and feel the press of her breasts against his chest, the warmth of her breath on his face as she spoke. “This might sting a bit.”
Roger found he could not respond, which was undoubtedly a blessing. He feared what he might blurt out in such a situation as this. He closed his eyes as she dabbed the cotton wool on the cut by his eyebrow, her body moving against his with every little dab of the wool. This was torture. Exquisite, unbelievable torture.
He must have drawn a decidedly unsteady breath, because she paused in her ministrations. “Does that hurt?”
“It’s fine.” His voice came out in something close to a snap. He pressed his lips together to keep from saying something he’d surely regret. Did she feel even an iota of what he was feeling?
Another dab. And then another. And then, with his eyes still closed, he felt her fingertip gently trace the line of his eyebrow. The very air in the room seemed to tauten and shimmer from beneath his eyelids.
“You’re definitely going to have a black eye,” she said, and Roger opened his eyes.
Lindy was very close. Close enough to kiss, should he so dare. Her gaze locked on his and for a second neither of them spoke. Neither of them breathed.
He could kiss her right now. All he needed to do was move his head a few inches. Two, at most. It would be so easy…
And yet it felt like the most difficult thing he’d ever done. Impossible. What if he was reading the signals wrong? What if she was shocked, offended, or worse, incredulous?
What if she wasn’t?
Did he even want to do this? Pursue some sort of relationship, begun with what most would see as a simple kiss? Heaven knew he’d kept himself from relationships before, and with good reason. They tended not to work out.
Besides, Lindy most likely didn’t even want to kiss him. Flirting was undoubtedly an instinct with her, as a beautiful woman, and nothing more. It didn’t mean anything.
They continued to stare at each other. Lindy’s eyes widened a fraction. Her breath came out in an uneven rush. Without making a conscious decision about what he was actually going to do, Roger moved forward.
His head had been tilted backwards so she could access his eye, and he straightened, intent on kissing her, or at least trying to kiss her, or maybe just seeing if she kissed him. Something. He wasn’t sure what. Probably not kissing at all, actually. Probably just some sort of awkward hovering.
Except he hadn’t realised there was a cupboard above his head and as he began moving in, he banged his head hard enough to see stars all over again.
With a muttered ‘oof’ he pressed one hand to the top of his now throbbing head and Lindy let out a smothered laugh.
“Oh, dear…”
“I seem to be accident prone.”

Yes and no—the quirky characters are a bit of a departure, and yet the cozy, emotional, feel-good aspect is beloved territory!

That love is for everyone.

I am currently working on the next book in the series, Remember Me at Willoughby Close. My next release is a historical saga, The Orphan’s Island, out on November 30.

To enter Giveaway: Please complete the Rafflecopter form and Post a comment to this Q: Do you enjoy reading quirky characters? How quirky is too quirky?

Excerpt from Christmas at Willoughby Close:

Welcome back to Willoughby Close, with four new residents and happy endings to deliver…

Belinda ‘Lindy’ Jamison has moved to the Cotswolds for a fresh start and to open a dancing school—her lifelong dream. Pushing forty and still looking for Mr. Right, Lindy is determined to no longer wait for happiness but to reach for it with both hands. So she packs up her life and heads south to Wychwood-on-Lea to start up her school.

Soon Lindy has a motley crew of would-be dancers. But her most intriguing pupil is Roger Wentworth, a forty-something bachelor with a shy and awkward manner, but a heart of blazing gold. When Lindy decides to showcase her pupils in a Christmas show, Roger is deeply reluctant but finally agrees. Lindy longs to bring Roger out of his shell—but she didn’t expect to fall in love with him in the process.

Soon it is Roger teaching her how two lonely hearts might be able to embrace a second chance this Christmas…if they can just believe they’re both worthy of love.

Kate Hewitt wrote her first story at the age of five, simply because her older brother had written one and she thought she could do it too. That story was one sentence long—fortunately, they have become a bit more detailed as she’s grown older.

She studied drama in college and shortly after graduation moved to New York City to pursue a career in theatre. This was derailed by something far better—meeting the man of her dreams who happened also to be her older brother’s childhood friend.

When her oldest daughter was one year old, she sold her first short story to a British magazine, The People’s Friend. Since then she has written many stories and serials as well as novels. In 2007 she received ‘The Call’ from Mills & Boon for her first Harlequin Presents novel, The Italian’s Chosen Wife. Since then she has written over 25 books for Harlequin, and also writes women’s fiction for Carina UK and Lion Hudson Press. She loves writing stories that both tackle tough issues and celebrate the redeeming power of love.

Besides writing, she enjoys reading, traveling, and learning to knit—it’s an ongoing process and she’s made a lot of scarves.