Hi Joanne and welcome to HJ! We’re so excited to chat with you about your new release, Expecting a Scandal!

Thank you for having me! I’m excited to share my first-ever Texas Cattleman’s Club story for Harlequin Desire! 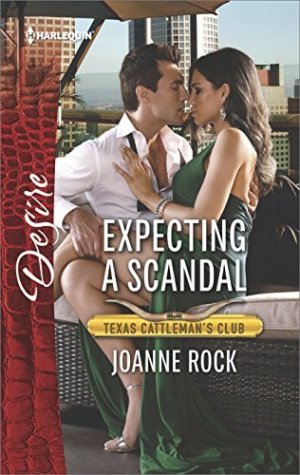 Abigail Stewart is a pregnant artist on her own, and she desperately needs the art commission up for grabs with Royal Memorial Hospital. Dr. Vaughn Chambers is on the committee to review her work and he’s not sure her art installation ideas are right for the children’s ward. They don’t get off to a great start, but the fireworks are undeniable when they meet. Abigail is drawn to him despite the rocky start, but Vaughn is battling PTSD and demons that he’s tried to keep quiet. As much as he wants a relationship with Abigail, he knows he can’t be the kind of family she needs.

Adjusting her glasses on her nose, Abigail Stewart hoped the funky red-and-black zebra frames distracted from the sheer desperation that must surely be visible in her eyes. She didn’t want the assembled Royal Memorial Hospital committee to see how badly she needed the commission for the sculpture she’d just proposed for the children’s ward. Or how much it upset her to be back inside a hospital for the first time since her sister’s death.

Abigail is a warm-hearted creative person and her studio reflects that. Full of light and color, her studio is a place to inspire her in the same way I try to make my office a place that will inspire me to write.

Vaughn Chambers is a trauma surgeon who felt called to share his skills with the military. Even with the PTSD episodes that plague him afterward, he wouldn’t change his choice about that. I was surprised by his journey and humbled by his altruistic choices. In writing his character, I had the opportunity to speak with nurses who work in trauma situations and their insights helped me with his character tremendously.

I think I would choose this scene at the Royal Memorial Hospital, when Vaughn comes to see Abby’s artwork in its early stages. I think the conversation between them shows their personalities….

I hope readers will feel uplifted by the love story as well as the artwork that Abigail creates. I hope they’re as moved as I was at the way Vaughn works to battle his PTSD. With every romance I write, I hope that readers feel empowered to follow their hopes, dreams, and maybe even their own romance.

I’m currently writing another Texas Cattleman’s Club story called The Rancher’s Bargain, that will be out in January 2019! As for the rest of this year, I will have three more McNeill Magnates stories upcoming, including:
The Forbidden Brother, Harlequin Desire, 7/18
Wild Wyoming Nights, Harlequin Desire, 8/18
One Night Scandal, Harlequin Desire 9/18

To enter Giveaway: Please complete the Rafflecopter form and Post a comment to this Q: If you needed a service dog like Dr. Chambers, which breed of dog would you choose?

Excerpt from Expecting a Scandal:

Five months pregnant and on her own. Even so, she can’t resist this rugged rancher…

Solely responsible for her unborn child, Abigail Stewart is desperate for the art commission at Royal Memorial Hospital. Winning over the sexy Texan on the board seems impossible, but Vaughn surprises her with his response. And his attention. And a sizzling connection that defies all logic. But even if he can accept her baby, will Vaughn’s dark past tear them apart?
Book Links: Book Links: Amazon | B&N | iTunes | kobo | BAM |

Four-time RITA nominee Joanne Rock has never met a romance sub-genre she didn’t like. The author of over eighty books enjoys writing a wide range of stories, most recently focusing on sexy contemporaries and small-town family sagas. An optimist by nature and perpetual seeker of silver linings, Joanne finds romance fits her life outlook perfectly–love is worth fighting for. A frequent speaker at regional and national writing conferences she enjoys giving back to the writing community that nurtured and inspired her early career. She has a Masters degree in Literature from the University of Louisville but credits her fiction writing skills to her intensive study with friend and fellow author Catherine Mann. When she’s not writing, Joanne enjoys travel, especially to see her favorite sports teams play and to gather new ideas.
Website | Facebook | Twitter | Instagram | GoodReads |

58 Responses to “Spotlight & Giveaway: Expecting a Scandal by Joanne Rock”