Today it is my pleasure to Welcome New York Times bestselling author Kristen Proby to HJ!

Hi Kristen Proby and welcome to HJ! We’re so excited to chat with you about your new release, Falling for Jillian! 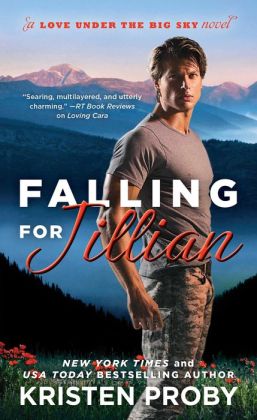 Jillian thought she was a city girl through and through; the fast cars, high fashion, and glamour—she loves it all. But when her ex tells her he’s having a baby with his new wife (after Jillian struggled for years to get pregnant), she hightails it back to Montana to cry on the shoulder of her best friend, Cara.

But in truth, Jillian would rather be comforted by someone else…specifically Zack, Cara’s brother-in-law. Zack is a veteran of the Iraq War who came back to the family ranch to raise his preteen son after the boy’s mother took off. He’s struggling to re-establish a relationship with his son, and warding off the demons of PTSD, which still haunt him. The last thing he needs is bold, brassy Jillian…but why can’t he keep his hands off her?

What is it with master bathrooms that makes people hem and haw? I glance down at my watch and offer the couple from Ontario a wide smile as they browse through the multimillion-dollar home near the Whitetail Mountain ski resort. In real estate, it’s always the master bathroom that people get hung up on.

The characters in this book are different than any I’ve written before. Zack in particular is so strong and protective, which we expect. But, he’s also sweet and loving. Tender. And he is completely crazy about his Jillian. It was fun to watch him fall in love.

I think it’s the family saga aspect of the series that is different from other books out there right now. It’s centered around a tight-knit community of colorful characters, and we get to revisit them again, follow them as their relationships progress. I love it as much as the readers do.

We don’t get to actually see Jillian and Zack’s first kiss, but when he corners her in the parking lot after her date with Max, sparks are intense. Zack is one hell of a kisser!

There were a few scenes in this book that had me tangled in knots. But here was the one that immediately comes to mind:

“Don’t you touch her!” Seth yells from the top of the stairs, then clambers down them and shoves me behind him, protecting me. “Don’t touch Jill.”
“Hi, sweetie.” Kensie sends him a fake smile. “Did you miss your mommy?”
“No. Go away.”
“Now, that’s no way to say hello to me. Come here, give me a hug.”
“No.” He shakes his head frantically and I take his shoulders in my hands and pull him against my side.
“Seth, you don’t have to do anything you don’t want to.” I hear tires on the driveway, but my gaze doesn’t leave the bitch before me.
Kensie snarls and reaches for Seth’s arm, trying to pull him from my grasp. Seth cries out in pain and Kensie lets go, but laughs. “God, you’re still a pussy.”
I’ve had enough. I push Seth behind me, pull my fist back, and plant it right in her fucking smug mouth. She stumbles back and cries out, but I advance on her and punch her again, harder this time, knocking her flat on her ass.
“Jill!”
“I fucking hate you,” I grind out between my teeth. “You’ll never lay your hands on that boy ever again. Do you hear me? Never. Again.”
Strong hands grip my arms but I shake them off and push my face in Kensie’s. “If you ever even think his name again, I’ll rip you apart.”

This is a great question! I think this would be a great audition scene:

“Okay, plug them in.”
I run to the porch and plug in the lights, then run back into the front yard to see them.
“Oh, they’re so pretty!”
“Thank God they all work,” he says as he tosses the black shoe down to the ground and then moves carefully down to the ladder. “It would be a bitch to have to take them back down.”
“I checked them,” I assure him, and when his foot finally lands safely on the snow and he turns to me, I hit him on the arm. “You shouldn’t have done that! You took ten years off my life!”
I throw my arms around his torso and squeeze him tightly, then back away.
“No, you shouldn’t have been on that ladder. If I catch you on one again, I’ll spank your ass until it glows.”
My jaw drops as I gaze up into his frustrated face. For once in my life, I’m speechless. I scowl as I pull myself together and clench my fists. “You wouldn’t dare . . .”
“Put yourself in danger again and see if I don’t,” he replies calmly and crosses his arms over his chest.
“Did you come here to bully me?”
He sighs and pulls his beanie off his head, pushing his fingers through the messy brown strands. I want to sink my fingers in that thick, dark hair.
“No. I came because you won’t answer your fucking phone so I can apologize for the other night.”
“I don’t want your apology,” I reply and throw the extra lights and staple gun back into the tote and turn away, but he catches my arm and turns me back to him, takes the tote, and sets it down.
“I’m going to give it anyway.” His jaw is firm. “I had no right to kiss you like that in the parking lot for everyone to see.”
I jerk back, mortified. “You’re apologizing for kissing me?”

Keep an open mind. Because life is messy, and plans change.

I’m currently working on my new The Boudreaux Series, the first of which, Easy Love, releases March 3rd. I am also about to work on another new series, but the details of that haven’t been announced yet.

To enter Giveaway: Please complete the Rafflecopter form and Post a comment to this Q: Who is your all-time favorite book boyfriend and why?

From New York Times bestselling author Kristen Proby comes the third romance in the Love Under the Big Sky series, featuring a veteran struggling with PTSD and the one woman who can help him recover—and learn to love again.
Jillian thought she was a city girl through and through; the fast cars, high fashion, and glamour—she loves it all. But when her ex tells her he’s having a baby with his new wife (after Jillian struggled for years to get pregnant), she hightails it back to Montana to cry on the shoulder of her best friend, Cara.

But in truth, Jillian would rather be comforted by someone else…specifically Zack, Cara’s brother-in-law. Zack is a veteran of the Iraq War who came back to the family ranch to raise his preteen son after the boy’s mother took off. He’s struggling to re-establish a relationship with his son, and warding off the demons of PTSD, which still haunt him. The last thing he needs is bold, brassy Jillian…but why can’t he keep his hands off her?

Kristen Proby is the New York Times bestselling author of the Love Under the Big Sky trilogy and the self-published With Me in Seattle series. She lives in the Pacific Northwest.

62 Responses to “Spotlight & Giveaway: Falling for Jillian by Kristen Proby”