Today it is my pleasure to Welcome New York Times bestselling author Melissa Foster to HJ!

Hi Melissa and welcome to HJ! We’re so excited to chat with you about your new release, Flirting with Love! 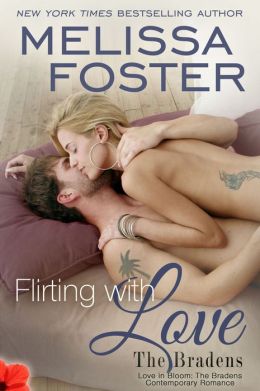 FLIRTING WITH LOVE is a book for anyone who has dreamed of finding true love and no matter how many times they were told it didn’t exist, they refused to settle for less. Ross and Elisabeth’s story is about finding the inner strength to follow your heart, regardless of the obstacles that stand in your way. And, of course, all of our Bradens get their HEAs.

ROSS BRADEN HANDED Flossie, a frail fifteen-year-old tabby with thinning fur and soulful eyes, to Alice Shalmer. Alice had recently retired from the Trusty, Colorado, library, where she’d been the head librarian for thirty-plus years. She lived on the outskirts of town and had seven cats, but Flossie was her favorite.

When I write about a Braden man, my heart goes a little crazy the entire time I write it. I love them as much as my readers do. They’re loyal to the bone, loving, and so careful with their women—until they can no longer resist, then they’re passion personified. This book was no different, but I found myself feeling Ross holding himself back and wanting to just let him “go for it” – but I couldn’t! He held back until he was ready, so I think readers will enjoy all of the heated moments in this book.

Ross Braden is the last single Braden man in Trusty, Colorado. He’s sexy as hell, wealthy, and very, very careful in everything he does. Of all of our Bradens, he is the most private. He’s a wealthy, big-hearted veterinarian just waiting for the right woman to call his own.

Elisabeth Nash is a dreamer. She has fond memories of visiting her favorite aunt in the close-knot town of Trusty, Colorado, but her overzealous mother, who lives life to the fullest and has always wanted Elisabeth to as well, raised Elisabeth in California, where Elisabeth never felt like she fit in. All Elisabeth wants is small town life and true love. She’s smart, strong, and leads with her heart, but she’s not exactly warmly welcomed when she returns to Trusty, and she’ll need all of her strength to find her footing.

Yes! I was surprised that Ross could keep his desires in check as long as he did. I was very proud of him, and it made for a very steamy book!

Elisabeth knocked on Ross’s door with an armful of flyers, a bottle of wine, and a smile on her lips that she had no hope of squelching. Her body hummed with excitement that had her bouncing a little on the porch. Ross opened the door. His eyes swept over her, and the pooches barreled out to greet her. Elisabeth threw caution to the wind and did a little barreling herself, straight into Ross’s bare chest, where she went up on her toes, slammed her eyes shut, and pressed her lips to his. She felt his arms circle her as he deepened the kiss. Her lips parted and their tongues collided. A hungry, masculine groan of appreciation rose from his lungs and made her hot all over. Knight nosed his way between them, and Elisabeth dropped back on her heels, wobbling backward a little.
Ross caught her with one strong arm around her waist.
“Hi,” she said breathlessly, reeling from the kiss that made her legs go weak and her body go hot. The kiss that made her lips numb and her brain foggy. Exactly the type of kiss she’d always dreamed a kiss should be.

Actually the first kiss scene (above) made me laugh. I loved when Elisabeth threw caution to the wind and jumped him!

If your book was optioned for a movie, what scene would you use for the audition of the main characters? (Please share a little snippet of the scene)

There’s a scene that comes about 20 pages in, when Ross is trying not to reveal his attraction to Elisabeth and at first she’s clueless. I think this would be a great audition scene because facial expressions would say it all:

The music wasn’t coming from inside; it was coming from the backyard. He rounded the side of the house and stopped at the sight of Elisabeth wearing a pair of black yoga pants and a skintight tank top. Her hair was pulled into a high ponytail and her body was contorted into some kind of knot with her incredibly hot ass up in the air. Christ, you are sexy. Ross’s mind immediately went to her long legs wrapped around him, over his shoulders, and—she unknotted herself and turned, catching him leering at her.
“Oh.” Her cheeks flushed.
Ross couldn’t even pretend he wasn’t staring, so he did the only thing he was capable of. He smiled. “Hey.”
“Ross. Dr. Braden. I didn’t see you standing there.” She rose, and Ross wanted to kiss the feet of whoever had developed yoga pants and tank tops. Elisabeth looked like a young Christie Brinkley. She definitely had the California-girl image, and Ross couldn’t find a damn thing wrong with that. She grabbed a towel and patted her glistening face, neck, and chest.
Damn. He’d love to be that towel.
“Ross, please,” he finally managed.
“Ross,” she repeated. “And who’s your adorable friend?”
Ross glanced at Storm. “Free dog,” he said to the pup and unleashed him. The command let Storm know he was off duty and free to play.
“This is Storm. He’s a service dog in training.”
She knelt to pet the puppy. “He’s beautiful. Six months?”
“Yeah, about that.” Ross was about to ask how she knew so quickly, but then he remembered she’d owned some kind of crazy pet bakery and spa. He couldn’t just stand there ogling her, so he made an attempt at small talk. “Yoga?”
“Yeah. It’s the only thing that centers me, and you know, new place, starting over. I definitely need centering.” She looked down at her clothes. “Please excuse the sweat.”
Ross nodded, unsure what else to say, because he was pretty sure, Babe, I’ll center you, and you can put that sweaty body against mine anytime, wouldn’t go over very well. Besides, getting involved with a neighbor was a bad idea. Even a neighbor who looked like she was put on this earth to fulfill his every fantasy.

To Elisabeth: No Braden man is irresistible, so you might as well not even try.
To Ross: Some rumors are worth the hassle.

December 16, SEASIDE SUNSETS (Seaside Summers, Book 3) will be released. I release a book every 4 week. Readers can look forward to DREAMING OF LOVE (The Bradens, Emily Braden’s book) in January, SEASIDE SECRETS (Seaside Summers, Book 4), and CRASHING INTO LOVE (The Bradens, Jake Braden’s book) in February.
I’m currently writing the HARBORSIDE NIGHTS series, a New Adult romance series that’s edgy, sexy, and very raw. It centers around a group of friends, several of whom are the children from the Love in Bloom (Snow Sisters, The Bradens, The Remingtons, Seaside Summers) series.

To enter Giveaway: Please complete the Rafflecopter form and Post a comment to this Q: If you were a newcomer in Trusty, Colorado, what would you do to fit into such a close-knit, protective community?

IN FLIRTING WITH LOVE…

Elisabeth Nash has spent years dreaming of returning to the small town of Trusty, Colorado, where she spent summers with her favorite aunt. When she inherits her aunt’s farmette, she closes her Los Angeles pet bakery and pampering business, sure that life in Trusty will be as peaceful and as welcoming as she remembers. But being an outsider in the close-knit town proves to be very different from the happy summers she remembers from her childhood—and falling for Trusty’s hot, wealthy, and sinfully irresistible veterinarian, Ross Braden, sends the rumor mill into a frenzy.

Ross Braden learned long ago that gossip spreads faster than weeds in his small hometown, and Ross loves nothing more than his privacy. For that reason, he doesn’t date women who live in Trusty. But that was before blond, beautiful, and refreshingly honest Elisabeth Nash flew into his vet clinic seeking help for her panicked piglet and turned his comfortable life—and his heart—inside out.

Despite rumors about Elisabeth’s motives toward her aunt’s property, passion brews between Elisabeth and Ross. Every steamy kiss and every sensual touch brings the pair closer together, and when Ross helps Elisabeth try to fit into the town he adores, it makes their bond even stronger. But even Elisabeth’s efforts toward reaching the community, and the love she and Ross so desperately believe in, might not be enough for the protective small town to offer them a future.

Melissa Foster is a New York Times & USA Today bestselling and award-winning author. She writes contemporary romance, new adult, contemporary women’s fiction, suspense, and historical fiction with emotionally compelling characters that stay with you long after you turn the last page. Her books have been recommended by USA Today’s book blog, Hagerstown Magazine, The Patriot, and several other print venues. She is the founder of the  World Literary Café and Fostering Success. When she’s not writing, Melissa helps authors navigate the publishing industry through her author training programs on  Fostering Success. Melissa has been published in Calgary’s Child Magazine, the Huffington Post, and Women Business Owners magazine.
Melissa hosts an Aspiring Authors contest for children and has painted and donated several murals to The Hospital for Sick Children in Washington, DC. Melissa lives in Maryland with her family.
Visit Melissa on social media. Melissa enjoys discussing her books with book clubs and reader groups, and welcomes an invitation to your event.

29 Responses to “Spotlight & Giveaway: Flirting with Love by Melissa Foster”