Today it is my pleasure to Welcome author Isabel Cooper to HJ!

Hi Isabel and welcome to HJ! We’re so excited to chat with you about your new release, Highland Dragon Master! 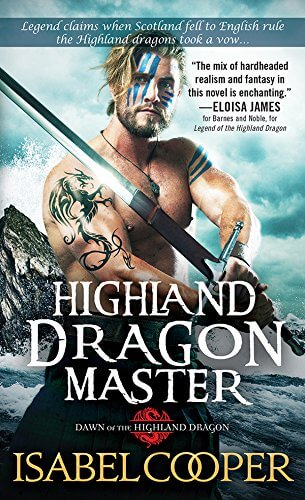 Sent away from the front lines in search of legendary treasure, Erik MacAlisdair hires a ship to take him into the Atlantic. The captain turns out to be Toinette: a shapeshifting dragon herself, Erik’s childhood friend, and then the subject of his youthful infatuation. They manage to keep their relationship businesslike, until a ferocious storm strands them and the crew on an island with deadly secrets.

The tent smelled of tallow and smoke. Outside was smoke too, charitably hiding many other battlefield smells—blood chief among them, though not the only one. Mortal men said they got used to the reek after war had gone on long enough. Erik doubted he ever would.

As with most of my books, it owes a lot to standard fantasy, and more to straight-up horror than most. It also focuses on community and the repercussions of living in one, on the ways that friendship and romance interact, and on the different ways duty plays out and how it can conflict.

Plus, it has a demon moose. (If there’s another romance novel with a demon moose out there, I would love to read it. Send me links.)

Toinette’s friendship with Marcus, and to a lesser extent how attached she was to her crew, were really unexpected. I had her pegged from the start as someone who was pretty cynical about human nature, for understandable backstory reasons, but I hadn’t anticipated how deep her ties would be otherwise, or how interesting the co-existence of those two mental outlooks would make her.

Writing the first kiss between Toinette and Erik was interesting, because there were actually two first kisses: one in the past, when they were both adolescents, and then the first one they really shared as adults. (Also, kissing—even on the mouth—was apparently a reasonably standard greeting if you knew anyone at all well in the Middle Ages, and that made things interesting too!)

Nothing quite so expressive while I was writing it—I’m too WASPy to emote, as a rule—but I did get a little choked up at one of the last scenes, where they’re returning in rather battered triumph from the final battle:

“Are you taking credit for saving my soul?”
Erik tied the final knot, sat up, and looked at her: bruised, cut, wearing only the dubious remains of her gown, in need of a far more thorough wash than her brief dip in the stream could provide, and utterly beautiful. “I’ll save you any way I can,” he said, “if there’s need.”
At that, Toinette turned and rose to face him, silent for a long minute before she spoke. “I love you too,” she said, “if you hadn’t worked that out. Now let’s get back onto land, before we fall asleep and drown.”

The first scene between Erik and Toinette after the shipwreck. They’ve just worked together in dragon form, they have to face men who didn’t know their natures until then, and people have died—men Erik had known for a few weeks, but one or two who’d been in Toinette’s crew for years. There are a lot of emotions going on.

He smelled smoke and turned to follow the odor. A few yards off, the sailors had built a fire between two of the largest rocks. They sat huddled around it, small fragile shapes against the empty night.
“Only six,” said Toinette’s voice from behind him.
Erik turned back toward her. She was human again as well, bright hair loosed from its moorings and straggling over her shoulders, rumpled red wool clinging to her figure. The gold sparks in her eyes might have been reflections of the firelight, and her face was expressionless.
“Yes,” said Erik, after a quick count.
“You saw more than I did, in the storm. Do you know who didn’t make it?”
“Gervase.” That image stood out in Erik’s mind. From experience, he knew it would stay there a while yet. “The mast.”

For anyone you want as a friend or a loved one, it’s who you are, not what, that matters.

I’m starting a new series: currently a trilogy of books involving multiple dimensions, alternate worlds, and the Labyrinth fanfic of my youth.

To enter Giveaway: Please complete the Rafflecopter form and Post a comment to this Q: What form of travel do you find most romantic?

“Yes, but—you always seemed to expect more from people. You called Artair heartless once, yourself.”
“Did I?” Slowly his face changed from half-friendly argument into something more fraught, his eyes darkening and a slow smile coming to his mouth. “Ah. Aye, I did, once.”
That might have been a mistake, Toinette thought. She wasn’t thinking of their argument any longer: she was remembering herself at sixteen, and the lanky golden-haired boy who’d taken umbrage to sending her away. She was remembering the feel of his mouth against hers, urgent and seeking. Toinette had hoped the kiss would be better than those she’d known when she’d barely come to womanhood, the attentions of spotty youths and old drunks who’d taken a bastard girl for fair game.
She hadn’t realized how much better it could be until she’d kissed Erik. And he’d been an untried youth then, and her own practice scarce and largely unwilling.
“You were very much the young knight, as I remember,” she said, her voice low and sensual.
“I tried. Though there are those who’d say I failed, that time.”
“Best pay no attention to small minds. Besides, I gave you little choice in the matter. Assaulted your purity, mayhap.” Toinette met his eyes, which shone in the darkness of the hold, and let her mouth curve up in a teasing smile.
“Hardly an assault,” he said huskily.
“So speaks the warrior. Of course, I know little of such things.” She stepped toward him, letting her hips sway. “No surprise I didn’t do it right. If I were to have a demonstration of the proper way, now—“
Then he grabbed her—had grabbed her, really, for she didn’t realize he was going to move until she was crushed against his broad chest, with one of his hands at the small of her back and the other tilting her face up toward his. Erik took her mouth with bruising force, not asking for a response but drawing one as the moon drew the tides.

He swore to protect Scotland to his last breath
But when terror rules the seas, he’ll have to make a choice:
Give everything he has for independence, or trust in the dragon who rules his heart.

The war for Scottish independence rages on, but it’s only a matter of time before England is victorious. Exhausted and battle-weary, Highland dragon Erik MacAlasdair will face unknown seas to seek the Templar stronghold and claim a power so great it could free his beloved homeland forever.

If only that kind of power didn’t come with such a terrible price.

Daughter of a mortal woman and an ancient dragon, Toinette has never forgotten the proud Scot who once stole her young heart—she’ll gladly fight at his side. But when dark forces leave them stranded on a cursed island, it will take everything they have to defy their fate…and trust the passion that burns within the heart of every dragon.
Book Links:  Amazon | B&N | Sourcebooks |

I live in Boston, where I spend my non-writing time editing essays on disruptive technology, playing outdated computer games, and eating horrifying amounts of sugar.
You can email me at isabelkunkle@gmail.com, follow me at @ICooperAuthor on Twitter, or read my blog at isabelcooper.wordpress.com