Hi Joanne and welcome to HJ! We’re so excited to chat with you about your new release, His Accidental Heir!

So glad to be back! 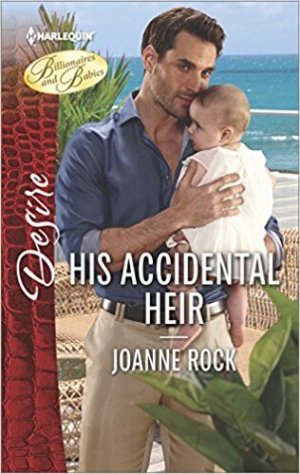 His Accidental Heir is my first Billionaires and Babies story for Harlequin Desire and it’s my third McNeill brother hero. Resort owner Cameron McNeill goes “Undercover Boss” as a demanding guest to find out what’s going on at his Caribbean hotel, only to find a sexy concierge who fulfills his every request. When he finds out she’s inherited a surprise baby, Cameron finds himself wanting to help… and more!

“Rafe, I need you in the Antilles Suite today.” Maresa Delphine handed her younger brother a gallon jug of bubble bath. “I have a guest checking in who needs a hot bath on arrival, but he isn’t sure what time he’ll get here.”

I gave this hero an adorable little show dog as part of his undercover efforts as a “pain in the neck” hotel guest. I had fun watching the hero get attached to the dog.

I like the tension of the scene where the heroine first meets her brother’s child. The hero has a small role– he is a bystander through some of it, but his quick support of the heroine on a day she receives stunning news is something special….

Maresa turned toward the path through the thick undergrowth that led back to the hotel and nearly ran right into Jaden Torries, her ex-fiancé.
“Whoa!” Jaden’s one hand reached to steady her, his other curved protectively around a pink bundle he carried. Tall and rangy, her artist ex-boyfriend was thin where Cameron was well-muscled. The round glasses Jaden wore for affectation and not because he needed them were jammed into the thick curls that reached his shoulders. “Maresa. I’ve been trying to contact you.”
He released her, juggling his hold on the small pink parcel he carried. A parcel that wriggled?
“I’ve been busy.” She wanted to pivot away from the man who’d told the whole island he was dumping her before informing her of the fact. But that shifting pink blanket captured her full attention.
A tiny wrinkled hand reached up from the lightweight cotton, the movement followed by the softest sigh imaginable.
Her ex-fiancé was carrying a baby.
“But this is important, Maresa. It’s about Isla.” He lowered his arm cradling the infant so Maresa could see her better.
Indigo eyes blinked up at her. Short dark hair complimented the baby’s medium skin tone. A white cotton headband decorated with rosettes rested above barely there eyebrows. Perfectly formed tiny features were molded into a silent yawn, the tiny hands reaching heavenward as the baby shifted against Jaden.
Something shifted inside Maresa at the same time. A maternal urge she hadn’t known she possessed seized her insides and squeezed tight. Once upon a time she had dreamed about having this man’s babies. She’d imagined what they would look like. Now, he had sought her out to…taunt her with the life she’d missed out on?
The maternal urge hardened into resentment, but she’d be damned if she’d let him see it.
“Congratulations. Your daughter is lovely, Jaden.” She straightened as the large shadow of Cameron Holmes covered them both.
“Is there a problem, Ms. Delphine?” His tone was cool and impersonal, yet in that awkward moment he felt like an ally.
She appreciated his strong presence beside her when she felt that old surge of betrayal. She let Jaden answer since she didn’t feel any need to defend the ex who’d called off their wedding via a text message.
“There’s no problem. I’m an old friend of Maresa’s. Jaden Torries.” He extended his free hand to introduce himself.
Mr. Holmes ignored it. Poppy barked at Jaden.
“Then I’m sure you’ll respect Maresa’s wish to be on her way.” Her unlikely rescuer tucked his hand under one arm as easily as he’d plucked his pet from the water earlier.
The warmth of his skin made her want to curl into him just like Poppy had, too.
“Right.” Jaden dropped his hand. “Except Rafe’s old girlfriend, Trina, left town last night, Maresa. And since Trina’s my cousin, she stuck me with the job of delivering Rafe’s daughter into your care.”
Maresa’s feet froze to the spot. She had a vague sense of Cameron leaning closer to her, his hand suddenly at her back. Which was helpful, because she thought for a minute there was a very real chance she was going to faint. Her knees wobbled beneath her.

I want people to be utterly transported by my story. I hope they feel like they’ve been to St. Thomas and seen the sights, and I hope they close the book feeling a little bit in love, too.

I’m writing my sixth McNeill story for Harlequin Desire right now! So excited to continue this series with a new set of brothers from their father’s mistress. In 2017, readers can look for

To enter Giveaway: Please complete the Rafflecopter form and Post a comment to this Q: Let’s say your billionaire book boyfriend invited you to rent a place in St. Thomas for the weekend. Would you opt for the cottage in the tropical foliage of the mountains? A bungalow on the beach? A villa on a resort property with all the amenities? Dream big! Tell me what you’d like in your vacation getaway property.

Excerpt from His Accidental Heir:

When resort developer Cameron McNeill goes undercover to root out problems at his prized island property, his first discovery is the irresistible concierge, Maresa Delphine. Her business smarts are vital to his mission. But the struggling single mom could help with his personal mission, too: fulfilling the marriage terms of his grandfather’s will.

Maresa is overwhelmed caring for her infant niece and tending to the demands of the resort’s sexy mystery guest. When he reveals himself as the owner, she’s thrown for a loop. But when he proposes…can she resist his brand of trouble in paradise?
Book Links:

Four-time RITA nominee Joanne Rock has never met a romance sub-genre she didn’t like. The author of over eighty books enjoys writing a wide range of stories, most recently focusing on sexy contemporaries and small town family sagas. An optimist by nature and perpetual seeker of silver linings, Joanne finds romance fits her life outlook perfectly–love is worth fighting for. A frequent speaker at regional and national writing conferences she enjoys giving back to the writing community that nurtured and inspired her early career. She has a Masters degree in Literature from the University of Louisville but credits her fiction writing skills to her intensive study with friend and fellow author Catherine Mann. When she’s not writing, Joanne enjoys travel, especially to see her favorite sports teams play with her former sports editor husband and three athletic-minded sons.
Website | Facebook | Twitter | Instagram | GoodReads |

42 Responses to “Spotlight & Giveaway: His Accidental Heir by Joanne Rock”