Hi Joanne and welcome to HJ! We’re so excited to chat with you about your new release, Little Secrets: His Pregnant Secretary!

Hello fellow readers!! I’m excited to be here again with the first of three more books in my McNeill series for Harlequin Desire! 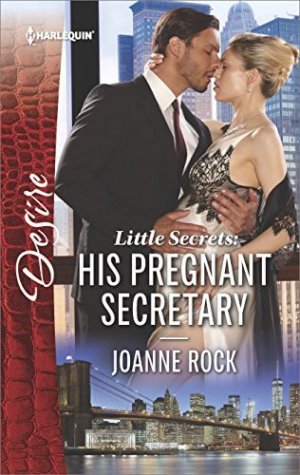 Delia is the right-hand assistant for her boss, Jager McNeill, and she’s been managing his business in Martinique while he’s been in the States for an extended period. When Jager returns, an unexpected incident pits them in close quarters, igniting a spark in their relationship. When Delia winds up pregnant, Jager keeps her close– she thinks they’re going to work out co-parenting while he’s angling for more. Their business takes them to New York, where they get to experience the magic of Manhattan during the holidays!

Sun glinted off the brilliant blue Atlantic, full of sailboats bobbing on the calm water. For Delia Rickard, the picturesque island scene meant only one thing. It was the perfect day to ask for a raise.

My characters always surprise me! I was fascinated by Delia’s past as the daughter of a fisherman– she had a hard life as a child, but we get to see some of her relationship with her father in this book, and she learns a lot about what he sacrificed to try and be a good father to her.
I was also surprised by the McNeill family’s evolving history… Jager and his brothers are trying to launch a huge venture in Silicon Valley, and I learned a lot about what that means and how businesses get off the ground.

I’d use a scene where the characters see each other again, for the first time in the book, in the water. The heroine has dived in to save a child —

She collapsed like a wet noodle against the slick, hot body of a man built like iron. Her dress floated like seaweed around her thighs, making her suddenly aware of the way her soaked bikini panties were all that separated her from him.
“Are you okay, Delia?” The voice in her ear was familiar; she’d heard it nearly every day for the past year, even if she hadn’t seen the man in person for weeks on end.
Her boss. Jager McNeill.
“Fine,” she spluttered, the word ending in a cough.
Of course, it was foolish to be embarrassed since she had dived in the water to save a child. And yet, it still felt terribly awkward to be caught with her dress up around her waist today of all days when she’d wanted to make the perfect professional impression.
Also, she’d scratched him.
Coughed all over him.
If she hadn’t had a crush on him once upon a time, maybe she wouldn’t be tingling from head to toe right now in spite of everything. But she feared if she tried to swim away from him to escape all the feelings, she just might drown. She was surprised to notice how far she’d drifted from the dock in her search. Behind them, she noticed the transport skiff that Cyril had sent out to meet Jager’s seaplane. Jager must have been arriving at the same time she’d jumped into the water.
“Hold onto my shoulders,” he told her, shifting their positions in the water so he faced her. “I’ll tow you to the dock.”
Nose to nose with him, Delia stared up into his steel-blue eyes. She thought she’d gotten used to his good looks in the past two years that they’d known each other. His dark hair and sharp, shadowed jaw made for enticing contrasts to those incredibly blue eyes. His hair had grown longer in the past months, as if barber visits were the last thing on his mind. But the way the damp strands curled along the strong column of his neck only added to the appeal.
This close, she had the benefit of sensing the wealth of muscle in his athletic body where he held her. Feeling the flush of heat course through her, she ducked deeper into the cold water to hide her reaction to him.
“I can make it.” Shaking her head, she scattered droplets from her wet hair. “I just needed to catch my breath.”
She attempted to paddle away, but Jager only gripped her tighter.
Oh. My.
Feeling the warmth of his chest through their clingy clothes roused an ache she should not be feeling for her boss. Adding to the problem, the strapless bra she’d been wearing had shifted lower on her rib cage where it did absolutely no good.
“Humor me,” he ordered her, his voice as controlled as his movements. “You’re exhausted and dry land is farther away than it looks.” He took one of her hands and placed it on his right shoulder. Then, turning away from her, he very deliberately set her other hand on his left shoulder.
He began to swim toward the dock with measured strokes, towing her along behind him. Water lapped over them in light waves. She felt every ripple of his muscles under her palms as the light waves swished over them. She debated fishing one hand down her dress to haul up her bra before they reached land, but decided the potential scolding from Jager if she let go of him wasn’t worth it. So she clung to him and gritted her teeth against the friction of her pebbled breasts rubbing against his back. By now he had to be as keenly aware of her as she was of him.
The only positive of this awkward reunion?
Any anxiety she had about talking business with him was utterly eclipsed by physical awareness. So when they reached land, she clamped onto the dock, evenly met his blue gaze and said, “I definitely deserve a raise.”

I always hope that readers will have a few hours of a romantic escape when they read one of my stories! I hope they feel like they’ve spent some time in the Caribbean, seeing some of the exotic sights of Martinique. But there’s also a lot of family in this story, and special attention given to the Christmas holidays, so I hope they finish the story with a happy sigh!

I’m writing more McNeills for Harlequin Desire! There are nine stories planned for the McNeill family and I’m writing number nine right now. In January 2018, I hope readers will be on the lookout for Claiming His Secret Heir. Then, in February 2018, For the Sake of His Heir. In April, I take a break from the McNeills to participate in the Texas Cattleman’s Club: Imposter series. My contribution, Expecting a Scandal is the fourth book in that series.

Giveaway: Meet the McNeills!! I’m giving away the first three McNeill stories two TWO winners–
The Magnate’s Mail-Order Bride
The Magnate’s Marriage Merger
His Accidental Heir
Open to US and INTL readers.
US winners may receive their choice of print or ebook. INTL winners will receive ebook copies only.

To enter Giveaway: Please complete the Rafflecopter form and Post a comment to this Q: Delia and Jager visit Manhattan for the holidays and Delia tries skating for the first time. Have you ever been ice skating or roller skating? Do you have a favorite winter sport?

Becoming a father was never part of Jager McNeill’s plan, until the heat between him and his luscious assistant turned into searing passion. Now Delia Rickard is carrying his baby. After growing up without a father, Jager’s determined to be there for his child. And marriage would ensure that. But despite their chemistry, Delia’s unwilling to marry for anything less than love.

A trip with Jager to Manhattan could change all that. For in this enchanting city ablaze with Christmas lights, romance begins to blossom. And a kiss under the mistletoe just might turn into lasting love.
Book Links:

Four-time RITA nominee Joanne Rock has never met a romance sub-genre she didn’t like. The author of over eighty books enjoys writing a wide range of stories, most recently focusing on sexy contemporaries and small town family sagas. An optimist by nature and perpetual seeker of silver linings, Joanne finds romance fits her life outlook perfectly–love is worth fighting for. A frequent speaker at regional and national writing conferences she enjoys giving back to the writing community that nurtured and inspired her early career. She has a Masters degree in Literature from the University of Louisville but credits her fiction writing skills to her intensive study with friend and fellow author Catherine Mann. When she’s not writing, Joanne enjoys travel, especially to see her favorite sports teams play and to gather new ideas.
Website | Facebook | Twitter | Instagram | GoodReads |

« REVIEW: The Lady in Red by Kelly Bowen
Spotlight & Giveaway: Tying the Scot by Jennifer Trethewey »

77 Responses to “Spotlight & Giveaway: His Pregnant Secretary by Joanne Rock”