Today it is my pleasure to Welcome author K.M. Jackson to HJ!

Hi K.M. Jackson and welcome to HJ! We’re so excited to chat with you about your new release, Insert Groom Here!

Thank you so much for having me here at Harlequin Junkie. What a pleasure and an honor it is. 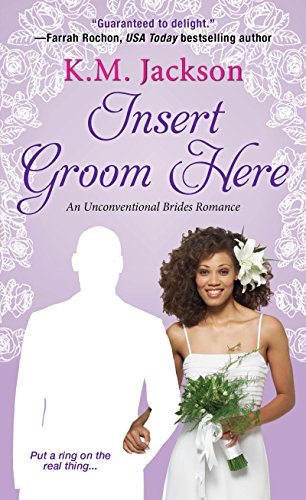 Insert Groom Here is the story of straight-laced PR exec Eva Ward who is jilted by her fiancé on live morning television. Once this happens Eva has a meltdown and makes the mistake of saying she’ll still have her planned televised wedding on the allotted day and all she has to do is Insert Groom Here. We get to follow Eva as she goes on her many studio set up dates all under the watchful eye of sexy Aidan Walker who is steadily falling for Eva himself.

“I can’t marry you.”
Eva Ward knew words were being murmured over her shoulder, but for the life of her she couldn’t quite make them out. The red light above the camera transfixed her, and Kevin’s voice sounded like it came from somewhere far away, as if from down a long corridor.

Eva Ward was a lot of fun to write. I wanted to write a woman who on the outside was all buttoned up and seemed to have it all together but if you went just slightly beneath the surface she was anything but. I hope I captured both sides of her. I also hope that I showed how with my hero, Aidan he was perceptive enough to see beneath that surface.

This is a fun question. Wouldn’t all writers love to see their books made into movies? There are quite a few scenes that I enjoy in Insert Groom Here I think a fun one to see played out would be the one where Eva goes on a yoga date and Aidan has to watch while another guy puts her body in different positions. The two of then spend a lot of time in the book in these type of positions fighting their urges while surrounded by other players.

Here is a bit from that scene:
Aidan was pissed. He was pissed and growly, and if that smooth, silky gigolo ran his hand up Eva’s thigh one more goddamned time, he was going to go over there, kick his ass, and hang him by the balls, using his own effing silks. How could he ever have thought this type of date was a good idea? Thought it would be amusing, no less. Showed what he knew about fun family programs.
He watched as indifferently as he could while the good-looking charmer took Eva through a series of sensual moves clearly better suited for the bedroom than for the mixed company at hand. Things started out well enough with the usual sun salutation and downward dog, which they did separately on their respective mats. But then the guy had the nerve to step out of his lane, come over, and lift Eva by her trim waist and smoothly place her in the makeshift scarf swing that hung above her, taking the fabric and easing it gently around her buttocks. That was when Aidan crossed his arms and locked them tight around his chest to hold them in place for the safety of all involved, and he hadn’t uncrossed them since.
Aidan watched as Miguel told Eva to trust him as he put her into something called a “monkey pose” and asked her to lean back into him—way back, letting her head fall all the way to the ground so she ended up supported only by her crossed legs and the silks wrapped around them. Aidan’s jaw dropped at the sight of her heart-shaped behind on display in such a way. It only got worse when Miguel told Eva to trust him further and had her spread her legs wide, while he held her balanced and stood centered between them. With a gentle push to her outer calves, she swung forward and back toward his groin. Aidan couldn’t help it and groaned aloud at the sight as he finally unlocked his arms and ran a frustrated hand through his hair.
Louisa shot him a look, and he gave her one right back. Screw it. How in the world did this guy get into the mix? He was billed as a yoga instructor, not some new age holistic gigolo. To calm himself, Aidan considered all the heads he planned on rolling over this particular pick. Shit. Dammed if that didn’t reek of something his father would do. But he didn’t like seeing Eva pawed over in such a way, and even worse, he hated that he cared as much as he did about the whole situation.
But care he did.
After their talk, he had felt even more twisted than before. And worse, he was more attached than ever, doing what he told himself not to do. Never to do. When you got emotionally attached to a subject, your judgment was off, and here clearly his judgment was off. He closed his eyes briefly and then decided to look at the screen instead of at the scene in front of him. At least he could let the HD version take the place of watching up close and give him a bit of emotional space.
Be objective, he told himself as he watched Miguel bring Eva back up. She smiled, and her soft brown cheeks took on a rosy glow. He smiled to himself. Despite it all, it was nice to see her looking happy. This was the first date on which he had witnessed her smile like that, the first on which she had that glow that he now knew came from deep within, and if the silky swirler did that for her, then he had to accept it and be happy for her. He knew her. The smile he saw now wasn’t her fake “we’re rolling” smile, and it wasn’t the smile she gave him either, the one that was genuine and real but hidden in the way back, behind the depths filled with that hidden sense of regret that she thought he didn’t detect. Seeing her now—smiling, laughing, and genuinely having fun while swinging with this dude—he felt happy for her, though it ripped at his core in a way he wasn’t prepared to deal with.
Eva stepped out in front of the silks and was led by Miguel to go behind them and lean forward, front first, into a downward dog but with her feet in the air. Aidan’s mind instantly went to how he’d love to have her in that position himself. As if reading his thoughts, she looked his way for a moment right before her head went forward. He gave her a grin he knew she couldn’t see from where he was behind the monitor. But still her mouth quirked up at the corner anyway, as if they were in mental sync, and he couldn’t help but shake his head and make a silent promise to her to send her flying as she’d never flown later that night.

I hope that people take away from reading Insert Groom Here feelings of joy and hopefulness, about love and finding love in unexpected places and ways.

I’m currently working on ideas for my next series. Shh… it’s top secret. And coming up next I have book 2 in my Unconventional Brises Series called To Me I Wed which is the story of Lily Parker and Vincent Caro. Lily is a total hoot who sends Vin’s life into a tailspin when she chooses his hot restaurant to throw her wedding to herself. I adore her and her story! It’s out in May of 2017 and available for pre-order now.

To enter Giveaway: Please complete the Rafflecopter form and Post a comment to this Q: In Insert Groom Here Eva Ward goes on quite a few dates to find Mr. Right Now from surfing to rock climbing, please share your most unconventional date.

Eva Ward has won a lavish wedding on the nation’s hottest morning show and can’t wait to kick off her
happily-ever-after in style. Too bad her fiancé backs out on-air—and cameraman Aidan Walker makes sure her private meltdown goes viral, down to the last couch-kicking moment. The only way Eva can save face and keep her perfect nuptial plans on track is to star in a new “find-a-groom” reality segment. But finding Mr. Right in one month means ignoring her handsome new producer—none other than Aidan himself—and getting their instant, exasperating attraction out of her system…

Eva soon finds there’s a lot more to Aidan than freewheeling charm. But one glimpse of his caring side can’t make up for off-camera politics, Aidan’s own secrets—or Eva’s fear that they’re too different to ever trust each other. So it’s time for her to flip this script, write twists no one will see coming—and risk her heart to get the real thing…
Book Links: 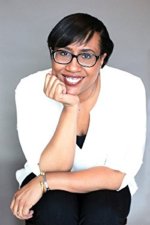 A native New Yorker, K.M. JACKSON has won RWA NYC’s Golden Apple Author of the Year Award and is a daily advocate for #WeNeedDiverseRomance. She currently lives in a suburb of New York with her husband, twins, and a precocious terrier named Jack that keeps her on her toes.
Website | Facebook | Twitter |