Today it is my pleasure to welcome author Kim Gruenenfelder to HJ! 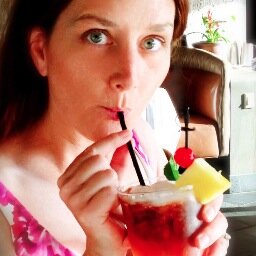 “Happily Clueless”. Because I am so much of the time. Nothing in my life has ever worked out how I thought it would, and many times that has been a good thing. Although I’m still working towards that house on the beach…..

I would want my husband and son with me, plus a five star resort. (There are deserted islands with resorts. I’ve seen them.)

Let’s talk about your newest release: KEEP CALM AND CARRY A BIG DRINK

In this delicious sequel to “There’s Cake in my Future” Mel, Seema and Nic are back, ready for another cake pull to ruin… ahem, guide… their lives. 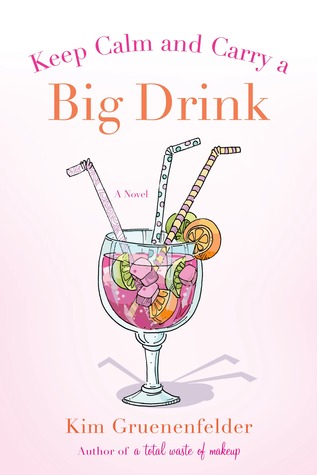 So now that I’ve gotten the marketing out of the way… In this novel, Mel is our main character, and she goes on a journey which changes her life. Her best friend Seema is getting married, her other best friend Nic is about to have a baby, and everyone’s life seems to be on track and moving forward but hers. When a cake charm tells her that her destiny involves nothing more than making money, she decides to ignore it, and follow Seema’s brother (a crush from college days) to Paris.

Mel is a teacher who had her life completely planned out, but is now in her early 30s, and questioning everything. Seema is a perfectionist bride trying to plan 2 weddings, one Indian (for her family) and one Western (for her groom’s family). She is just coming to terms with the next part of a relationship: when the insanely hot guy you had the hots for 24/7 slowly turns into the guy who can not put his dishes in the sink, and for God knows what reason won’t sleep in beige sheets. Nic is still happily married, but about to become a new mom, and she has no idea what she’s in for.
Two new characters from the sequel are Jeff, an old college friend of Mel’s (and technically an ex-boyfriend, but he’s gay so there’s no real tension there.) and Vijay, Seema’s brother, who Mel has had an unrequited crush on since college. I had fun with these guys for a few reasons. With Vijay, I was able to bring in the dynamic of a family member, which I miss having in my books. My first two books (“A Total Waste of Makeup” and “Misery Loves Cabernet”) had a lot of family relationships, and I missed doing that.
Jeff was fun to write. I’ve always hesitated to write a gay best friend in my books, because I feel they are frequently clichéd cardboard cutouts. But I also have gay friends, one in particular, who I feel aren’t always represented accurately in the media. My guy drinks beer, not Cosmos. He will talk about Mel’s sex life, but really he’s more interested in his own. He doesn’t always have the zinging one liners – sometimes he sets them up for others. Jeff is also loosely based on my friend Jeff, and it’s always easier when you can pull material from real life.

When I was writing the runaway groom scene, I initially had Seema go after her groom, Scott (spoiler alert, he rides away on a horse right before the wedding). But then I realized… no. Mel would be compelled to do it. She’s the maid of honor, and therefore needs to deal with this unfortunate wedding detail.
It’s the first time in her relationship with the other two women when she’s ever taken control, but as she’s watching her friend get jilted, something inside of her gets very protective, and she can’t help but go after Scott, possibly to kill him. 😉

The opening scene was pretty fun. Anytime I get the three girls together, it’s always fun. Here’s a snippet. (Note to editor: use as much or as little as you want.)

I really don’t like writing sex scenes. It’s more of a trend lately, so the book may be a little sexier than my other novels.
But I think the hardest scene to write was describing the sights and sounds of Maui during the first time in many months that Mel goes for a run. I love Maui. There is a calm there, a feeling there, that I found very hard to describe. And it’s not in the honeymoon hotels – although those are great too. It’s the day to day life of the natives: the library, the poke, the Spam aisle at the grocery store. I hope I captured that.

The following morning, I awaken to sunshine streaming right into my eyes. I look over at the alarm clock on the nightstand: 10:15.
We didn’t get out of the bar until around three, and I probably didn’t get into bed until nearly four. And I didn’t really sleep in the twenty fours hours leading up to landing here.
I should be dead right now.
I glance out of my window, pitch black the night before, and have to adjust my eyes to the brightness of both the sun and the colors. Jeff’s house rests slightly on a hill, so from my room, I can see nothing but bright green palm trees, greenery of all sorts, white and yellow flowers, and a few roofs from neighboring houses. Wow – and this is only the guest room.
I climb out of bed, and put my feet down on his polished hardwood floors. Then I go to my suitcase, and rummage around for a T shirt, my UCLA workout shorts, and my running shoes.
Jeff won’t miss me – he’ll be asleep until at least noon. So I take the spare key he gave me and write him a note, which I tack on his refrigerator.
Gorgeous morning.
Gone running.
Might never stop. ☺

And for the first time in over a year, I run for miles.
You see things differently when you’re in a new place – you notice details that haven’t registered in awhile at home. My run (or should I say, my run, followed by walk, followed by run – it has been awhile) was glorious in that I happily soaked up what to the locals is mundane.
I delighted in everything I looked at, just in Jeff’s neighborhood. People coming out of their houses to get the Sunday paper (Who knew there were people walking out to get an actual paper in this day and age?) families dressed for church or a beach day piling into the car, the kids laughing and happy and not even realizing they’re growing up in the prettiest place on Earth.
I jog down to the beach, completely empty even though it is a magnificently beautiful day. I watch a woman sip her coffee in a paper cup while walking her Golden Retriever. Another woman, with a stroller, jogs up to her and gives her a big hug. A woman walks out of the grocery store, carrying her canvas bags filled with food. Older men play chess at a table near the beach.
I keep running.

Jennifer Lawrence or Mila Kunis as Mel. Freida Pinto or Mindy Kaling as Seema. Kristin Bell or Kaley Cuoco as Nic. All of these women are funny, which I think would be key to the movie.

Seema: Be nicer to your fiancée. You have this idea in your head of what marriage is supposed to look like. Let it go. You’re the same two people the day after the wedding as you were the day before.
Nic: The first 6 weeks of motherhood SUCKS. You never sleep, you rarely shower, and the baby isn’t even smiling yet. It will get better.
Mel: Don’t go through life as the Beta dog. The decisions you don’t make can be just as important as the decisions you do make. So, quit hiding and go after what you want.

I’m currently taking a little break from writing novels to work on a couple of TV pilots, one of which is based on my books, “A Total Waste of Makeup” and “Misery Loves Cabernet”.

Ah… love that question. Love when readers get in touch with me. kim@kimgruenenfelder.com

To enter Giveaway: Please complete the Rafflecopter form and post a comment to this Q: In Keep Calm and Carry a Big Drink; Desperate for travel, Mel asks for the passport charm. If you were pulling a “Cake Charm” at Seema’s bridal shower what would you want it to be and why?

In Keep Calm and Carry a Big Drink, Kim Gruenenfelder’s delicious follow-up to There’s Cake in My Future, Seema, Nic and Mel are back, adjusting to their new lives as a bride-to-be, a mother-to-be, and a recently single girl looking for love

It’s been almost a year since Mel, Nic and Seema pulled their magical charms out of the cake at Nic’s bridal shower and most of their happily-ever-afters seemingly came true. Seema is about to marry Scott in an elaborate three-day affair. Nic is glowingly pregnant. And Mel… well, Mel feels as if she accidentally veered off the rails of her life at some point and isn’t sure how to get back on. She recently became single again, she’s been threatened with a layoff from her teaching job, and she has to find her own place now that Scott is moving in with her roommate, Seema.

Nic thinks Mel just needs a new cake charm to bring her good luck. . . and decides to rig the cake pull at Seema’s bridal shower. Desperate for travel, Mel asks for the passport charm. But, once again, the cake proves to have a mind of its own, and she pulls a charm she doesn’t want, and can not use. Rather than be bound by the charm’s prophecy, Mel realizes she, and she alone, is responsible for her destiny. A spur of the moment decision takes her to Paris and then Maui, where she finds herself on an adventure that she never could have imagined, experiencing the trials and tribulations of a life suddenly and perfectly unplanned. And, along the way, she begins to learn that, however nonsensical it may seem, the cake is never wrong…

« Spotlight & Giveaway: Changed By His Son’s Smile by Robin Gianna
REVIEW: Once Upon a Christmas Night by Annie Claydon »