Today it is my pleasure to Welcome author Lucy Monroe to HJ!

Hi Lucy and welcome to HJ! We’re so excited to chat with you about your new release, Kostas’s Convenient Bride! 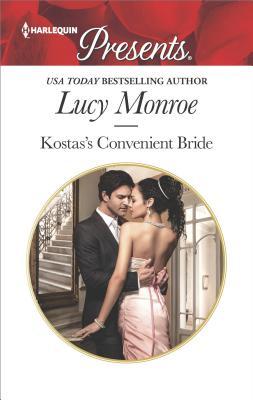 Best friends to red hot lovers with a hint of betrayal and emotional mayhem.

Kayla Jones hop-rushed down the hall toward Andreas’ office, buckling her denim wedge sandal as she went. She’d stripped out of her clean-room bunny suit in less than a minute, but redressing took longer.
Late for a high priority meeting with the Type-A, ultra-alpha president of KJ Software was nothing Kayla wanted to be.
Even if he was her business partner.

Before writing the book, Lucy Monroe:

Andreas is first attracted by Kayla’s:

Kayla is first attracted by Andreas’:

Up, down and all around.

This scene is that moment when you can’t help but see what both Andreas and Kayla don’t…their love for each other, their inability to do anything BUT put the other one first:

Damn it, he needed to remember that the passion they’d shared had been too consuming for good decisions.
She slammed her beloved smart phone down in front of him. “Fix it.”
The phone beeped, indicating a text.
“Fix what?” They’d long ago established she was the more technically savvy of the two of them.
“That!”
The phone beeped again.
“What?”
She shoved it in his face.
His eyes focused on the screen. The text was from Genevieve. Demanding Kayla get Andreas on the next plane back to Portland.
“You gave your bride-pimp my phone number.”
“Yes.” It had seemed like good idea at the time.
“Call her right now and tell her to stop using it.”
“Just ignore her texts.”
“That’s what you’ve been doing.” Damn, Kayla’s voice could register pissed-off-woman when she wanted to, with a heavy dose of disapproval. “And her phone calls, I bet.”
“She’s not on this morning’s agenda.” And Genevieve needed to learn that Andreas dealt with things in his time, not someone else’s.
Kayla’s glare went nuclear. “Well, putting up with her harassment isn’t on my agenda at all. Call her off, Andreas. Right now.”
“You’re in a bad mood this morning.”
“I was woken out of a sound sleep by incessant calls and texts from someone I shouldn’t have to speak to at all.”
“I told you she wanted to talk to you.”
“Andreas, I’m not kidding.”
“You never sleep this late.” Kayla was an early riser, like him.
“I wanted to sleep in. That’s my prerogative. I’m on vacation.” She looked at him like he was the one who was acting entirely out of character and suddenly not making sense.
Andreas didn’t know what Kayla saw in his face, but whatever it was, she got that supremely annoyed, impatient, I’ve-had-it look. He’d seen it very rarely, but when she got it, he knew things were about to go pear shaped. He despised that look.
The one person in the world that he actually minded being at odds with was Kayla Jones. “Listen, Kayla—”
She put up her hand, cutting him off. She didn’t say anything, just made a production of turning off her phone and dropping it on the table in front of him. Then she went back into her bedroom and slammed the door.

This is the moment Andreas realizes his plans for the future have changed and it’s pivotal to what comes later. It takes a while for Kayla to catch up and realize just how different his perspective is now.

He kissed her temple and pointed at something on the shoreline. “Amazing, isn’t it?”
“Where is all this affection coming from?” Kayla started to wonder if she was in one of those dreams. The ones where you thought you were awake, but really you were still sleeping.
She’d never had one, but she’d heard of them.
“I like touching you. I had forgotten how much.”
“Did you take seasickness pills, or something this morning?”
His laughter was rich and warm and all hers. A sound he shared with so few people she couldn’t help reveling in, even if this was a super elaborate, really vivid, overly detailed dream.
“Or something.”
She turned her head so their gazes met, knowing it was risky, but unable to have this conversation without eye contact. “What does that mean?”
“I’ve had a revelation.” His grin was all straight, white teeth and positively blinding.
“What kind of revelation?” she asked suspiciously.

I’m currently working on a Christmas book for Harlequin Presents for next year about a man who has two parents from India, but is raised VERY American and a woman who was born in America, but raised to take the role of Indian princess, nominal though it might be. I am also working on my next Children of the Moon book (Viking’s Moon) and am super excited about my October release from Harlequin Presents…it’s connected to Kostas’s Convenient Bride and that’s all I’ll say at present.

Giveaway: Pamper Me package with spa type stuff and a signed copy of Kostas’s Convenient Bride.

To enter Giveaway: Please complete the Rafflecopter form and Post a comment to this Q: Have you ever had a crush on a friend…did it go anywhere?

Her boss needs a bride… Can she step out of the shadows and down the aisle?
Discovering her boss, billionaire tycoon Andreas Kostas, must marry is devastating for Kayla. Until Andreas proposes that Kayla wears his ring! Having experienced the incandescent pleasure of his touch, she’s hidden her yearning for him ever since. It’s the proposal Kayla’s always dreamt of, but dare she risk her body and heart to become a convenient wife?
Book Links: Amazon | B&N | iTunes | Goodreads | 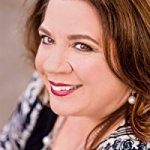 With more than 7 million copies of her books in print worldwide, award winning and USA Today bestseller Lucy Monroe has published over 70 books and had her stories translated for sale all over the world. While she writes multiple subgenres of romance, all of her books are sexy, deeply emotional and adhere to the concept that love will conquer all. A passionate devotee of romance, she adores sharing her love for the genre with her readers.
Website | Facebook | Twitter | | Instagram |