Hi Meg and welcome to HJ! We’re so excited to chat with you about your new release, Love in the Morning! 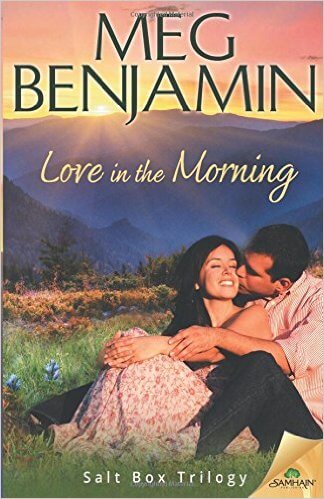 L is for Lizzy Apodaca, my indomitable heroine who’s been through hell and come out the other side stronger, smarter, and more determined than ever.

I is for Independent, which describes my hero, Clark Denham, a proud hotel owner who wants his breakfast buffet to be the best in Salt Box, Colorado. Fortunately he finds Lizzy, the perfect chef who desperately needs a job and a new home.

T is for Termagants, a fancy word meaning bitches that perfectly describes the stars of The Lovely Ladies of LA, some of whom are definitely interested in ruining Lizzy’s life. Again.

M is for, well, Morning. The time of day Lizzy works her magic in the kitchen and supplies the delectable Clark with muffins and love. And morning is also what the Praeger House Hotel of Salt Box represents for her—a new start, a new chance, a new man. As long as a certain group of Termagants don’t get in the way.

At the end of the book, when most of the drama is over, my hero and heroine walk back through a light snowstorm (she’s from LA–has never seen it snow before). “Lizzy paused for a moment, feeling tiny flakes land on her cheeks like cold kisses.” I really like that one!

My characters meet sort of by chance (Lizzy decides to try her luck finding a job at the first place that appeals to her, and Praeger House is it; Clark needs an assistant chef, pronto), and at first neither is all that attracted. But little by little they develop respect for each other and that respect turns to attraction. Lizzy likes Clark’s commitment to his goals, and his belief in his hotel. Clark (believe it or not) is attracted to Lizzy’s omelet-making skills. There’s just something about a super-competent chef doing her thing that takes his breath away.

I didn’t know much about the Real Housewives-type shows that the Lovely Ladies of LA is based on. I’d never watched them, and I don’t have cable. I read a lot of tabloid coverage and watched all the snippets available on the various Real Housewives web sites. It wasn’t exactly fun but I did get some kick-ass villains out of it.
I’m always excited when I get to work with a chef character. This time I got to explore the world of breakfast buffets. Yum.

I think the setting of both my Salt Box books is a little unusual. Salt Box, Colorado is based on a lot of small Colorado mountain towns that cater to both tourists and locals. Visitors love them, but there’s also a local culture that can be sort of quirky. That quirkiness shows up in the Blarney Stone bar in Love in the Morning, complete with its resident curmudgeon, who just happens to be a legendary Hollywood producer. There’s also a tie-in with reality shows in all three books. I’m not really much of a fan of a lot of reality TV, but it still has a kind of awful fascination. I guess what I’m doing here is showing what happens when reality TV runs into Reality.

Happens after the couple have already had a couple of strictly-business dinner dates. And after Lizzy has confessed her Big Secret to a newfound Salt Box friend, but not to Clark. Clark comes to the kitchen after hours to firm up some special menu items, and, well, things develop in the direction they’ve been heading all along:

She heard his quick inhale, as if the lip licking had been some kind of signal. Maybe it had been.
And then he was leaning forward, stepping off the stool, one arm sliding around her waist, bringing her body up against his. She had time to feel the shape of his arousal against her belly, and then his lips touched hers and she lost track of whatever it was she’d been thinking about.

Probably the opening scene of the book. Lizzy is desperate. She’s down to her last dollar, almost literally, and her car has run out of gas in Salt Box. She’s also hiding a disaster in her past that may make it difficult for her to get another job as a chef. She needs a kitchen where she can hide out while she finds her feet again. The Praeger House hotel looks like salvation, but she has to get by a man she assumes is the janitor, who might be inclined to throw her out. The “janitor” turns out to be the owner, but Lizzy still fears that he might not hire her. But, as it turns out, he does:

“I…um…” She took another breath.
His eyes were back to narrow.
“My car ran out of gas at the edge of town, and I’m not sure I can get it started again.” She said it all in a single breath.
In the ensuing silence, she could hear the dim clang of pots and pans in the kitchen. She was willing to bet the chef was not a happy camper at the moment.
Apparently, Denham heard the clangs too. He sighed. “Come on. I’ll drive you to your car and get it started. Then you can come back and fill out all the forms before you go into the kitchen and do whatever the hell it is Clarice wants you to do.” He turned on his heel and headed for the back door.
Lizzy closed her eyes for a moment, blowing out a long breath. The whole thing was still Too Good To Be True, but it was also apparently real. At least for now. Who knew? Maybe her luck had finally begun to change.
“Come on, damn it!” Denham snarled from the doorway. “I don’t have all day for this.”
Or not.

As always, I want people to have a good time and to leave the book feeling happy. And I’d like readers to feel that it’s possible to start all over. That disasters don’t need to be permanent. Lizzy begins in defeat but ends in victory. That’s something I want you to feel good about.

I’ve completed the third book in the Salt Box Trilogy, Running on Empty, which is scheduled for a September release right now. I’ve also been working on a couple of novellas that pick up some of my Konigsburg characters. I hope at least one of them will be out this year.

Giveaway: A $10 gift card at either the US Amazon or Barnes and Noble.

To enter Giveaway: Please complete the Rafflecopter form and Post a comment to this Q: So what’s your favorite breakfast dish? Or are you someone who avoids breakfast when you can?

Excerpt from Love in the Morning:

The reality show Lovely Ladies of L.A. should have launched Lizzy Apodaca’s catering company into solvency. Instead, when her carefully prepared appetizers mysteriously gave the cast on-camera food poisoning, she lost everything.

To make matters worse, her car breaks down in Salt Box, Colorado, a town not much bigger than a salt shaker. But maybe her luck is changing—the handsome owner of Praeger House, the town’s premier hotel, needs a kitchen assistant.

Clark Denham realizes his diamond in the rough is a polished gem when Lizzy steps up to save the hotel’s breakfast buffet after his temperamental head chef quits. It isn’t long before she’s winning his heart as smoothly and efficiently as she runs his kitchen.

Their relationship goes from simmer to rolling boil with the speed of a short order cook. But when a bevy of not-so-lovely ladies shows up in Salt Box, Lizzy’s past disaster threatens to flatten her happily ever after faster than a falling soufflé. 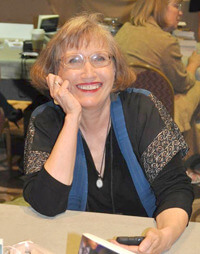 Meg Benjamin is an award-winning author of contemporary romance. Her Konigsburg series for Samhain Publishing is set in the Texas Hill Country and her Salt Box trilogy is set in her new home the Colorado Rockies. Her Ramos Family Trilogy for Berkley InterMix is set in San Antonio. Meg’s books have won numerous awards, including an EPIC Award, a Romantic Times Reviewers’ Choice Award, the Holt Medallion from Virginia Romance Writers, the Beanpot Award from the New England Romance Writers and the Award of Excellence from Colorado Romance Writers.
Website | Facebook | Twitter |

64 Responses to “Spotlight & Giveaway: Love in the Morning by Meg Benjamin”