Today it is my pleasure to Welcome author Paris Wynters to HJ!

Hi Paris and welcome to HJ! We’re so excited to chat with you about your new release, Love on the Winter Steppes! 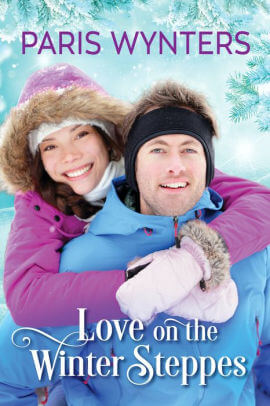 Love on the Winter Steppes is a sweet romance set in Mongolia. It features a career driven woman who is traveling with her sister and grandmother to learn more about her heritage. While in Mongolia she runs into a middle grade author who has traveled to the country in hopes of finding inspiration for his winter fantasy novel. What neither expect to find is love.

“So magic portals and telepathic reindeer are totally possible, but singing reindeer aren’t?”

Why think about cologne at all? If she liked the smell so much, she could run out, buy her own bottle of manly cologne, and spritz the scent around her room. Way less hassle and time commitment.

My mother’s side is half Mongolian, so my own heritage and learning more about it were a huge inspiration for the book. I visited once many years ago and I hope to go back again one day and bring my son. The book was a way of reconnecting for me as well.

Qara is half Mongolian. She is career driven and has no social life. She also doesn’t know much about her heritage. Ben was raised by career driven people and became the polar opposite. He is a middle grade author, who is suffering from major writers block. Ben was very surprising to me because he is so laid back and tolerant in many ways. There is no way I wouldn’t be having major panic attacks about upcoming deadlines, even if they are months away. He is so opposite of who I am. Some of the ways I got to understand Ben more was by observing people I knew who were like him. Surprisingly, I know way too many people who are like Qara. I think there are lessons I can learn from Ben, some of which are actually part of my goals for the new year.

There were so many. I loved writing the scene at the ice festival, especially the naughty reindeer.

“I found one you should ride.” Qara pulled him over to one of the reindeer. “His name is Brefew and it means ‘strong willed’, right?” Qara looked at the attendant, who nodded.
Ben blinked. So that was what she was up to. Picking out his reindeer. He quirked a brow at her. “Are you sure Brefew shouldn’t be your reindeer, with a name like that?”
She lifted her chin. “I’m sure I don’t know what you mean.”
Her lips twitched, giving away the fact she was trying to fight a smile, and he snorted. He waited as the caretaker put a blanket and saddle on the animal and then hopped on. Qara, after more deliberation, picked out her own reindeer and off they went.
Their guide took them and four others less than a mile out and then back. But during the ride, Brefew lived up to his name. If that even was his name. Ben wasn’t sure because the animal acted like he’d never heard the word before. Or the word stop. Or go, for that matter.
Brefew came to an abrupt stop yet again, almost vaulting Ben off his back. Then, he lowered his thick neck and began chowing down on a patch of grass that wasn’t covered in snow. Ben waited. Ten seconds. Twenty. The animal kept happily munching away.
“You know we’re at the front of the line, right, buddy? Could you please help a guy out here and get your haunch in gear? We’re holding everyone up.” Ben pleaded with the reindeer as he tapped the animal’s sides with his heels like the guide had shown him, but he might as well have been talking to a block of ice.

I would say when Qara and Ben have a falling out. And it was difficult because of the tone of the book and keeping that disappointment light instead of going deeper and angrier like I normally do. I think it was also hard because I tend to feel deep emotions, including anger, so trying to write something lighter definitely was a challenge.

She blinked and looked down at the floor as she ran her palms down the fabric of her dress as if to straighten out any wrinkles. Then she looked him straight in the eye. “Why would you do that?”
Ben rubbed his neck while his stomach churned. This wasn’t going like he’d planned. “I thought you’d be excited.”
“Ben, I know you believe in me, but those were nowhere near good enough to send in. Those were quick sketches.” Her voice was rising, which caused his stomach to act up even more. “I showed those to you in confidence and expected them to stay between us. You didn’t even ask for my permission.”
Ben faltered to find the right words, especially after registering her wounded expression. His cheeks flushed as regret surfaced in his chest. He was such a fool. “You’re right, I should have asked first. I just wanted to surprise you. Show you that you do have what it takes for a career in art.”
Except, those were definitely not the right words.
Qara’s eyes narrowed, her lips pursing. “Well, that’s not your call to make. It was mine. And now you just embarrassed us both.”

I would say it is a departure from my usual writing style as I tend to write more angsty characters and steamy love scenes. But this was definitely a fun experience.

How important spending time with family can be, learning about where you came from, and also rekindling those hobbies we used to find joy in.

I am currently planning a sequel to this book featuring Rose. I do have an upcoming release in May for Called into Action that features K-9 Search and Rescue, and Assigned, Book 3 of my Navy Seals of Little Creek series comes out in July.

Giveaway: An ebook copy of Love on the Winter Steppes & 3 Tule ebooks

To enter Giveaway: Please complete the Rafflecopter form and Post a comment to this Q: What is a favorite winter activity you love to partake in?
What is a country you would love to travel to?

Excerpt from Love on the Winter Steppes:

Can a magical day at the Ice Festival melt this career-focused woman’s heart?

Marketing consultant Qara Whitaker loves her job, happily putting in endless hours and working through holidays. But when her grandmother asks that she accompany her on a birthday trip to Mongolia to visit their family, Qara can’t say no. Packing up her laptop, Qara boards the plane—never imagining that a shared cab ride with a stranger will change her life forever.

Hoping to push through writer’s block, author Benjamin Lacoy hops on a plane to Mongolia looking for inspiration. A chance meeting with a beautiful and intelligent woman whose smile ignites his heart leads to them playing tourists. Sparks fly and Ben is feeling far more than inspiration, yet each time he and Qara get close, she’s distracted by work.

Ben is torn; he likes Qara, but he always promised himself he’d never let work come before family and friends like his parents did. Opposites clearly attract, but can they learn to balance work with love in order to build a future together?

Paris Wynters is an adult romance author repped by Tricia Skinner at Fuse Literary. She lives on Long Island (in New York) with her family, which includes two psychotic working dogs. Paris is a graduate of Loyola University Chicago.

Paris and her son are nationally certified Search and Rescue personnel (she is a canine handler). She is a huge supporter of the military/veteran community. When not writing, Paris enjoys playing XBOX (she is a huge HALO fanatic and enjoys FORTNITE), watching hockey (Go Islanders), and trying new things like flying planes and taking trapeze classes.
Website | Facebook | Twitter | Instagram | GoodReads |

« REVIEW: Ever After Always by Chloe Liese
Spotlight & Giveaway: How to Undo The proud Billionaire by Joss Wood »

14 Responses to “Spotlight & Giveaway: Love on the Winter Steppes by Paris Wynters”