Today it is my pleasure to welcome author Cat Devon to HJ! 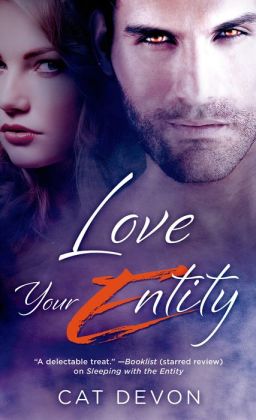 These are not in order but there they are –
1) Not having to get dressed up for work.
2) Working on my own timeline and in my own home office.
3) Interacting with readers!!
4) Listening to my characters – I’ve often said if I could only teach them how to type I’d be in great shape!
5) That magical moment when I am writing and time flies and I discover new things about my characters that I didn’t know before.

Um, maybe the girl next door who is able to kick-butt if necessary. Because kicking butt all the time can be too exhausting and frankly a little overwhelming for everyone.

Let’s talk about your newest release: Love Your Entity

Sierra Brennan can inherit her great-uncle’s historic Chicago townhouse under one condition: She must live there for thirty consecutive days. What could possibly go wrong? As a writer and a ghost whisperer, Sierra has a vast imagination and a brave spirit. But not even she is prepared for the gorgeous—and naked—vampire who greets her at the door.

Sierra writes paranormal novels and she is a ghost whisperer. Ronan is a formerly indentured vampire who has returned to his family home in Chicago only to find Sierra barging in on him.

The opening was great fun and totally unexpected for me as the writer! I was as surprised as my heroine Sierra.

When Sierra Brennan opened the door to her new house in Chicago, she didn’t expect to find a naked man standing inside. A very hot sexy well-built and well-hung man, looking like he was hung-over. He made no attempt to cover up while she made every effort to keep her eyes on his face and not his privates.

The scene near the end, between Ronan and his sister, because my brother was going through some serious life-threatening health issues while I wrote the book. He’s doing better now and the book is dedicated to him.

“You’re cold, hard and mean,” Sierra told Voz.
“Indeed I am,” Voz readily agreed. “But I keep my promises.” He tilted his head toward the stairway behind him. “Your sister.”
“Adele?” Ronan’s voice was ragged.

I just finished writing LOVE YOUR ENTITY which comes out December 31st. What other releases do you have planned for 2013 into 2014? Nothing I can talk about yet

To enter Giveaway: Please complete the Rafflecopter form and post a comment to this Q: Do you believe in ghosts? Have you ever visited a historical location where you could feel the presence of something you couldn’t explain even if you didn’t see an actual ghost?

SOMETIMES LOVE IS A MATTER

Sierra Brennan can inherit her great-uncle’s historic Chicago townhouse under one condition: She must live there for thirty consecutive days. What could possibly go wrong? As a writer and a ghost whisperer, Sierra has a vast imagination and a brave spirit. But not even she is prepared for the gorgeous—and naked—vampire who greets her at the door.

OF LIFE AND UN-DEATH

Ronan McCoy has spent the past century waiting to come home…to this house. The presence of the beautiful, brazen Sierra is one complication he doesn’t expect. The other is Hal, a dangerous ghost and original member of Al Capone’s gang who’s dead-set on revenge. What is a formerly indentured vampire supposed to do to get a moment’s peace? All he knows for sure is that he must protect Sierra from Hal. But once he has her in his arms, can he ever let her go? Life—and love—is becoming stranger than fiction for Sierra…and more delicious than she and Ronan could have ever imagined… in Love Your Entity.

« REVIEW: The Lady’s Choice by Bernadette Rowley
Spotlight & Giveaway: The Heart of a Duke by Victoria Morgan »

44 Responses to “Spotlight & Giveaway: Love Your Entity by Cat Devon”