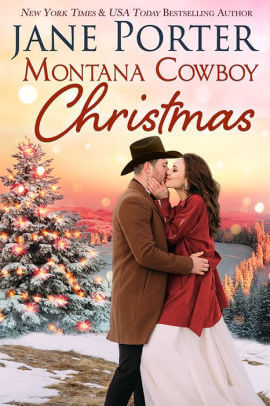 It’s almost Christmas and nationally-ranked barrel racer Ivy Wyckoff has returned home to Montana desperate for a miracle. A cowgirl to her bones, she’s always solved her own problems, but when her ex—rodeo champ, Sam Wyatt—shows up offering more than a shoulder to cry on, Ivy’s tempted to grab the safety line he throws.

Sam Wyatt just wrapped his most successful year on the PRCA circuit. After long days and even longer nights, all he wants is a quiet holiday on his family’s Paradise Valley ranch…until he sees Ivy again. He can tell she’s in trouble. They may have called it quits two years ago, but she’s the one woman he regretted walking away from.

Sam will do anything to keep Ivy safe, including putting a ring on her finger and sharing his name with her this Christmas.

Sam had intended to Christmas shop after swinging by the Wolf Den, and he tried, too. He drove to Main Street and parked his truck, stalking into the Western Wear store to see if he couldn’t find a new Pendleton shirt for Grandad, and maybe a warm soft vest for Mom, but as he surveyed the racks of clothes, he saw Ivy in her tight T-shirt smiling at the bikers, giving them the smile she’d always saved for him.
That sweet, sexy smile made him see red.
He was not happy.
Seriously. Not. Happy.
“Can I help you find something?” the older saleslady asked, approaching Sam.
Sam’s narrowed gaze swept from the offending racks of clothes to the saleswoman. He forced himself to soften his expression. “No. Thank you.”
“We have some good Christmas specials right now. Buy two off that rack there, and get a third shirt for free.”
“Thanks,” he said, aware his tone was still far too curt. “I need to get home, but I’ll be back.”
“The special lasts until Friday.”
“Good to know. Thanks.”
Sam fumed the whole drive home.
Ivy had changed. She’d always been an open book before, but she was all shuttered up now. Outwardly, she might still be the beautiful Ivy he knew, but there was a new guard up, a new hardness he didn’t recognize. He didn’t know what to think of the change, didn’t know what to think of her working at a stripper bar, either. Ivy was no prude, but she was a nice girl, conservative, raised in the church. She didn’t mess around. She didn’t take unnecessary risks. She lived for her horses and competing. But losing her mom two years ago had rocked her world. Ivy and her mom, Shelby, had been close, practically best friends, but then Ivy seemed to bounce back quickly, moving on with new boyfriend Wes, getting bigger sponsors, and a lot more visibility. Suddenly she was in magazines, featured in Instagram stories and ads. Slender, beautiful, photogenic, everybody wanted her, and she should have made a lot of money on those national sponsors.
So, if she’d made those lucrative deals, why was she scraping by here in Marietta? And why had she been reduced to working at the Wolf Den?
Something didn’t add up, and Sam didn’t know what bothered him more—the fact that he was so upset to see her there, or the fact she didn’t even seem to care that he’d come looking for her.
It wasn’t his problem, he told himself. Ivy was an adult, free to do whatever she wanted. But at the same time, Sam had promised her mom that he’d look out for her, and so far he’d done a pretty poor job of it.
Sam growled deep in his throat, foot heavy on the accelerator, as if he could outrun the vision of her in his head, in her tight red T-shirt and even tighter, fitted jeans, her western belt with the big silver buckle flat against her narrow waist, smiling at the bikers, calling them boys.
Those bikers weren’t boys. And back when they were together, Ivy didn’t know how to make a drink. Heck, she didn’t even drink. So why was she working the bar at the Wolf Den?

Ivy exhaled hard after Sam left. That had been weird. And incredibly uncomfortable. She didn’t like discussing Wes, and she certainly didn’t feel as if she had to defend herself to Sam, of all people. Sam Wyatt with his lofty plans and ambitions. Sam, with his dreams so big there wasn’t room for anyone else but him.
And then Ivy kicked herself, because she wasn’t being fair. Not totally.
Sam had never been bad to her. He just hadn’t given her enough.
She’d loved him, too, loved him so much it made her heart ache, but in the end, he’d let her go and that… well, that had broken her heart.
So, no, she didn’t hate him. How could you hate beautiful, swaggering, immensely talented Sam Wyatt? The cowboy was so confident, so intense, he reminded her of the sun. Necessary. Brilliant.
Scorching.
The scorching part was why she’d broken up with him. There just didn’t seem to be room enough in his sphere for both of them, and the only way for her heart to survive was for her to put space between them.
And yet, she’d hoped he’d come after her. She prayed he’d realize how much he missed her. But there was no epiphany on his part. He’d taken her at her word and moved forward with his life and career without her.
Sam’s single-minded focus was what made him so successful on the rodeo circuit. But that same single-minded focus made him a terrible boyfriend. She’d known from the beginning he was competitive and driven. He didn’t like turning down opportunities or events or money, not even so his brothers—or Ivy—could succeed. Initially, she hadn’t minded. She’d been an only child and she was plenty independent. Ivy figured out how to succeed around him, carving space out for herself so she could focus on her own events. It was only as time went on, and they were getting more serious, that she came to resent how Sam always came first and she came last. Why should it be her compromising all the time? Why didn’t he compromise more?
Maybe the problem was that she and Sam were too much alike. They both wanted big things, and neither were willing to make the necessary concessions a relationship needed. They’d always had a passionate relationship. When things were good it was very, very good, but when things weren’t good, it was very, very bad.
After the breakup, Ivy waited and waited to hear from him. Waited and waited for an olive branch. The waiting made her angry. They’d had so much history together. So much love. But Sam seemed to have forgotten the love, and after four brutal, lonely months—months where she cried every single day, if not twice a day—she realized he wasn’t coming back for her. There would be no reconciliation. They were done.
Through.
Then, in the middle of that year of that heartbreak, her mom died, and grieving for Sam was swallowed into grief over losing the most inspiring person Ivy knew. Ivy’s mom had been a trailblazer and fearless. A six-time national barrel racing champion, Ivy’s mom, Shelby Lynn, did the impossible, and she did it with style and grit and courage.
Courage.
Ivy tried to cling to some of that same courage as she made funeral arrangements for her mom and then decisions of what to do with her mom’s estate. Sam sent flowers with a card that read, Thinking of you. So very sorry for your loss. Sam.
That was all the card said.
That was all Sam could think of saying to her after so many months?
Ivy cried holding the card, crying hard because she realized that this was the best Sam could do, or would do, and it simply wasn’t enough.
His attempt to be sympathetic was pitiful.
She rejected it, and him, throwing away the card, and then the next day, throwing out the flowers because it hurt her, just seeing them. Better to not see them. Better to not be reminded of him.
Wes, a stock supplier who she’d known from the rodeo, sent flowers, too. She kept those flowers. She didn’t know Wes well, but his flowers were beautiful and they gave her no pain. He called a week later to see if she needed anything. She said she didn’t but thank you. He called two weeks later, letting her know he was in the area, and would she want to meet for coffee or a drink? Ivy thought about the invitation for a couple of hours, then texted that yes she’d enjoy meeting him, and the rest was history.
Bad history.

Excerpt. ©Jane Porter. Posted by arrangement with the publisher. All rights reserved.

New York Times and USA Today bestselling author of forty-nine romances and women’s fiction titles, Jane Porter has been a finalist for the prestigious RITA award five times and won in 2014 for Best Novella with her story, Take Me, Cowboy, from Tule Publishing. Today, Jane has over 12 million copies in print, including her wildly successful, Flirting With Forty, picked by Redbook as its Red Hot Summer Read, and reprinted six times in seven weeks before being made into a Lifetime movie starring Heather Locklear. A mother of three sons, Jane holds an MA in Writing from the University of San Francisco and makes her home in sunny San Clemente, CA with her surfer husband and two dogs.