Today it is my pleasure to Welcome romance author Debra Salonen to HJ!

Hi Debra and welcome to HJ! We’re so excited to chat with you about your new release, Montana Darling!

What was the Inspiration for this story: 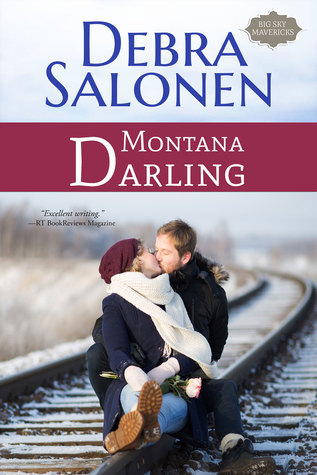 I met the Zabrinski family in dribbles and snippets while writing Montana Cowgirl (Cowgirl Come Home)–what turned out to be Book I in my Big Sky Mavericks series. At the time, my hero’s three, older siblings were just “walk-on” shadow people with one or two identifying markers to keep them straight in my mind.

Austen = politician/heartbreaker with a big ego and no heart to speak of.
Mia = workaholic, overachiever, single mom/breast cancer survivor who had the rug pulled out from her supposedly perfect life.
Meg = emotionally remote egghead professor who likes wolves more than people but wants to have a baby before she turns forty.
You know what they say about first impressions–be prepared to be proven wrong. Austen turned out to have a real, beating heart–you should see him with the baby alpacas. Mia’s intensity masked her vulnerability, but she turned out to be the bravest of them all. And Meg? I’m writing her story now, and I find out something new and interesting about her every day. I love the whole Zabrinski family and I’m delighted by how three-dimensional these characters have become. The cardboard placeholders are long gone. I hope the Big Sky Mavericks–and Paul–feel as real to my readers as they are to me.

1. Ryker Bensen has been around the world at least three times.
2. Mia’s family pet is a mocha-colored labradoodle named Roxy. I polled my Facebook audience to come up with the name. Jamie Knutson gave me the winning suggestion and it fits perfectly.
3. Ryker prefers milk chocolate to dark. (Although he’d rather not admit the fact because his French girlfriend convinced him dark was sexier–and more masculine.)
4. Mia’s “Big Sky Mavericks'” call sign was: Nitro…because big “booms” comes in small packages.

They waddled quite gracelessly through the wet yard to the patio, which provided enough protection for Ryker to shake out the umbrella and stash it in a dry corner. He pulled a key from his pocket. “Side door,” he said, drawing her with him. “The slider is very sticky.”
Mia had been to Bailey’s workshop several times, but never at night. They kicked off their shoes and boots on a wide woven mat. “My socks are wet.”
“Mine, too. We can dry them on the register in my room.”
His hand was warm and comforting. “Want some tea or cocoa? Won’t be as good as Sage Carrigan’s.”
She squeezed his fingers. “Nothing right now.”
Was that signal clear enough? She wanted something that had nothing to do with food. She wanted him, God help her. She even brought along a couple of the condoms she bought in Bozeman the last time she was there. Not for fear of pregnancy, but because she hadn’t taken him up on his offer of a doctor’s report.
Her lack of female plumbing was another reason why this fling with Ryker could never go any further than a little temporary fun. He wasn’t even thirty. He’d want children at some point. He deserved a family of his own. She wasn’t the right woman for him…long-term, but for tonight? She wasn’t a sex fiend, but she felt fairly confident they’d both enjoy what was about to happen.
“What’s it like living in a jewelry store?” she asked as they passed the new showroom.
He shrugged. “Ask me in a week. When I was doing school pictures, I left in the morning before the ladies got here and they were gone by the time I got back.” He paused, his smile a bit mischievous. “But they’re really nice. They think I’m too thin so they leave plates of goodies for me. One of the ladies–I don’t know which–makes the best brownies on the planet. Do you want one?”
She did. “I cut sugar out of my diet because somebody told me or I read somewhere that sugar feeds cancer cells.”
He pulled her close. “But you got rid of the cancer cells.”
“I did, didn’t I?” What was her excuse for cutting pleasure from her diet? As a punishment for getting sick in the first place? “Okay. Give me a brownie.”
His smile triggered something silly, bright and magical inside her. She applauded when he danced like some crazy hipster down the hallway to the kitchen. He was a young Tom Cruise in white socks and blue jeans, with a mop of curls and laughing eyes.
He returned a second later in serious waiter mode–a yellow plate resting on his uplifted hand. “Madam,” he said with a phony French accent. “If you weel follow me. Your table..or should I say…bed…is waiting.”
Bed. The b-word. God, I’m really going to do this, aren’t I?
His bow was her answer. Tonight was about having fun.
Exactly what he made her want to feel again. Ryker Bensen was the right man to remind her she was still alive.

To enter Giveaway: Please complete the Rafflecopter form and Post a comment to this Q: Milk chocolate or dark? (There’s really only one right answer. 😉 )

Mia Zabrinski‘s lost enough–
Her marriage. Her job. Her body image. Mia beat cancer and is ready to rebuild her life in her hometown of Marietta, Montana. Literally. Her first order of business is to build a house on the ten-acre parcel she was awarded in her divorce settlement. And she’s damned if she’ll let some stranger camp on her land and claim squatter’s rights. So maybe he’s not a squatter. The high-end bike and camera hint at more. Plus, he’s hot, gorgeous and smart, but that doesn’t make him less of a threat–especially when he has the audacity to claim the land is his. Look out, darlin’, Nitro is back and prepared to prove what the other Big Sky Mavericks always knew: small packages can pack a big punch.

Ryker Bensen doesn’t have much–
And that suits him fine. Less than a year ago, he had everything: a beautiful girlfriend, a baby on the way, a career that earned him fame and a very comfortable living…until he didn’t. Grief sent him to ground, and his favorite ground growing up was a ten-acre patch along side the Marietta River where he camped every summer – land held in trust until his thirtieth birthday, now just a few weeks away. When a beautiful spitfire named Mia Zabrinski shows up and orders him off what she says is her land, Ryker realizes she might be the spark he needed to jumpstart his interest in living again. 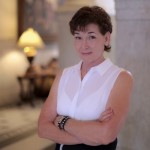 Former award-winning newspaper journalist Debra Salonen is a nationally bestselling author with 26 published novels for Harlequin’s Superromance and American lines and one single title release for Harlequin Signature. Several of her titles were nominated for “Best Superromance,” including UNTIL HE MET RACHEL, which took home that honor in 2010. Debra was named Romantic Times Reviewer’s Career Achievement “Series Storyteller of the Year” in 2006. Debra lives in the foothills near Yosemite National Park in California with her husband and two dogs. Luckily, her two children and three grandchildren live close by to keep Debra connected to the real world.

« REVIEW: Say Yes to the Marquess by Tessa Dare
REVIEW: Hot and Bothered by Serena Bell »