Proper young ladies of the ton-especially ones who have very small dowries-are not encouraged to have an interest in intellectual pursuits. Indeed, the only things they are encouraged to pursue are eligible bachelors.

So, the headstrong Sloane sisters must keep their passions a secret. Ah, but secret passions are wont to lead a lady into trouble . . . 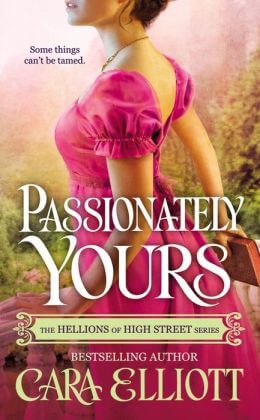 With her older sisters both happily married, Caro Sloane yearns for a romantic adventure of her own. Unfortunately the muddy, sulfur-scented waters of Bath seem the least likely setting for love or excitement. But the aspiring young poet soon finds inspiration when she runs into a familiar-and achingly handsome-Scottish laird.

Visiting Bath with his sickly sister, Alec McClellan is shocked to be reunited with Caro Sloane. He hasn’t been able to forget the English beauty since their brief but exhilarating first meeting. But Bath is not nearly as serene as it appears, and soon Alec must protect Caro from a danger that threatens to extinguish the sparks flying between them. Little does he know that a bit of danger is exactly what Caro is looking for . . .

Read an exclusive excerpt from Passionately Yours:

“One would almost think you were going out of your way to avoid speaking to me.”

“We’re speaking now,” he pointed out.

“I would call it verbal sparring.” Caro edged around impatiently, forcing him to look her in the face. “But now that I have you alone, I’d rather not keep trading thrusts and parries. I would rather discuss far more important matters—such as whether you have learned anything new about the attack on your sister?”

Pursing his lips, Alec shifted his stance just enough to allow him to return to his perusal of the lettering on the column. “Not really.”

“Ye gods.” She restrained the urge to take hold of his arm and give him a hard shake. “What sort of answer is that?”

“The only one I intend to give,” he replied calmly.

“Fine.” Caro watched the breeze ruffle his long hair, causing a tangle of red-gold strands to curl around his ear and dance down the freshly shaven line of his jaw. The faint scent of bay rum tickled at her nostrils.

“Fine,” she repeated, after forcing herself to exhale. “Then I’ll just have to do a little poking around on my own.”

That got his attention. He looked around abruptly, his gaze narrowing to a slitted stare. The movement was quick, but not quick enough to hide the sudden darkening of his eyes.

“That wouldn’t be wise,” he growled. “The only thing I will add for now is that you should stay well away from Edward Thayer.”

“Because…” He let out an exasperated grunt. “Must you always plague me with questions?”

“I wouldn’t have to if you would stop treating me like a feather-headed wigeon.”

“Haven’t I proved myself trustworthy and capable?”

A small muscle on his jaw twitched. “I am not at liberty to give you any more details right now. All I can say is that…” As he drew in a breath, he seemed to change his mind about what to say. “Thayer is a charming fellow. No doubt his smooth words are more to your liking.”

If his storm-blue stare squeezed any tighter, it would be sharper than a razor’s edge.

“And scrupulously polite,” she added.

Alec was becoming more flustered. Small sounds were beginning to rumble in his throat, like the growling of a bear. “I do not have Thayer’s gift of making myself agreeable. He has a honeyed tongue, which seems to appeal to all the ladies.”

“Honey is, after all, a great deal more palatable than vinegar,” Caro pointed out.

Caro let him stew for a moment longer before huffing an exasperated sigh. “Oh, for heaven’s sake, give me some credit for having a brain, Lord Strathcona! Of course I don’t find Thayer appealing. When honey drips that freely, it ought to catch naught but flies.”

Caro waited for him to speak.

Ever so slowly, Alec shifted his feet, stirring tiny puffs of pale dust beneath his boots.

The flicker of dark leather caused a momentary spasm of doubt as she recalled her chilling encounter in the churchyard.

Alec as evil? She couldn’t explain how, but she knew with a certainty that resonated right down to her very heartbeat that it couldn’t be true.

“Are you saying you would trust my word over his?”

“Yes, you big lummox! I don’t know why I should, but I prefer your snaps and growls.”

A dappling of sunlight seemed to catch on the curl of his lashes, gilding them to a gleaming gold.

“You are forthright, you are honorable in your own maddening way,” she went on. Oh, no man ought to have such beautiful eyes.

She found herself staring, and at that moment, all rational thought seemed to dance away in the breeze. His face was utterly intriguing—a mix of chiseled planes and well-defined features that hinted at hidden secrets.

“And… well, you are quite the most interesting man I have ever met.” Her legs suddenly seemed a little unsteady, so Caro reached out and caught hold of his lapels.

Looking up, she found his mouth was only inches from hers.

“Oh, bosh—I shall probably regret this…” Standing on tiptoes, Caro kissed him. Not a mere feathering of flesh against flesh, but a hard, hungry embrace that she let go on for far, far longer than any proper young lady should dare.

“There, I have no doubt shocked you.”

The tip of his tongue traced along the swell of his lower lip.

“I imagine you think me a wanton hellion, and I suppose I am. It must be my eccentric upbringing. I don’t care very much for rules.”

Caro knew she was babbling but she couldn’t seem to stop. “You may consign me to the Devil. But at least I shall dance a merry jig on my way to perdition.”

Was that finally a hint of smile?

She finally dared pause to take a breath. A long, shuddering breath. Now was the time to flee, before she made an even bigger fool of herself.

“I, too, shall probably regret this,” he said as he slowly circled his arms around her and pulled her close.

She opened her mouth. To protest?

Before she could make any sense of what she had set in motion, their lips met again, setting off a fierce jolt of fire.

Excerpt. ©Cara Elliott. Posted by arrangement with the publisher. All rights reserved.

To enter Giveaway: Please complete the Rafflecopter form and post a comment to this Q: What did you think of the excerpt spotlighted here? Leave a comment for the author with your thoughts on the book…

Cara Elliott started writing Western novels at the age of five. Later she changed her genre to Regency romance after reading Pride and Prejudice. She graduated from Yale University, and she now lives and works in New York City.

« Spotlight & Giveaway: If You’re Not the One by Jemma Forte
REVIEW: Midwife’s Baby Bump by Susanne Hampton »

52 Responses to “Spotlight & Giveaway: Passionately Yours by Cara Elliott”