Today it is my pleasure to Welcome author Kelly Jamieson to HJ!

Hi Kelly and welcome to HJ! We’re so excited to chat with you about your new release, Playing Hurt! 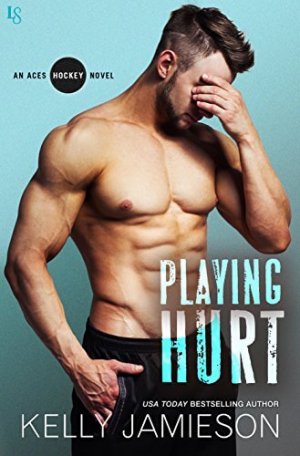 The next player to fall on the Aces Hockey team is Chase! Pro hockey player Chase Hartman’s season isn’t going so well, but when his celebrity crush replies to his Tweet, it’s a bright spot in his life. He and rising pop star Jordyn Banks develop an on-line flirtation that leads to a spontaneous bet on the outcome of a hockey game between their two favorite teams. Jordyn’s team loses, and she owes Chase… a real live date. Not so easy when they live in different cities and have such busy lives, but a deal’s a deal!

“Holy shit. She’s following me on Twitter.” I stared down at my phone, standing in the locker room of the Moen’s Center following our game-day skate.
“Who is?”
“Jordyn Banks.” I looked up at my teammate and buddy Cam Brickley, aka Brick, and grinned. “Holy shit.”

Jordyn’s a talented musician who writes and sings, plays piano and guitar, and is influenced by Chicago blues music. She’s also a sports fan, especially hockey. She gets her love of music from her mom, and her love of sports from her dad. She cares about her family and friends which sometimes makes her try to meddle a little, which causes some sparks between her and Chase.

Chase is also talented. His hockey story is a little different—when he was a kid, he wasn’t very good at skating and he wanted to quit. But his parents expressed their disappointment with that by withdrawing their love, and the lesson he learned from that was to be loved, he had to be what other people wanted him to be. He’s also a tough, stubborn athlete who refuses to let the team down because he’s in a little pain.

I think the scene where Chase and Jordyn are walking along the Chicago River and then arrive at Millennium Park to see the Christmas tree would be a beautiful movie scene—picture the big, soft snow flakes and the Christmas lights, Jordyn’s rosy cheeks and their first, barely-there kiss…so romantic!

Real love isn’t conditional. And love doesn’t have to hold us back from being who we are – it helps us be who we are.

I just handed in the last in the Aces Hockey series ( Game On) — sob! It will be out January, 2019. But I’m already starting work on the first book in my new hockey series, The Wynns. I’m excited to get into this new series and get to know a whole gang of new hockey people!

To enter Giveaway: Please complete the Rafflecopter form and Post a comment to this Q: We all have funny things we’re afraid of – snakes, bugs, heights. Jordyn is afraid of fire. What’s one thing you’re afraid of?

Down on the Esplanade, it was chillier, but the evening felt calm and peaceful. The sounds of traffic were muted, and the clouds and snow kept it from being too dark.
Chase gestured across the river. “That’s where I live. That big building there.”
“Oh, nice! What a stellar location.”
“Yeah, I like it.”
“So hockey must be what you’ve always wanted to do. Or did you decide late in life you wanted to be a hockey player?”
“Ha. I don’t think it was really my decision.”
“What?”
“My parents put me into hockey when I was six years old. It was just the way it was. One time I tried to quit.”
“Really?”
“Yeah.” He shrugged but I felt the tension in him. “It didn’t go well. So I kept playing.”
“But . . . you must love it.”
“Yeah, yeah, I do. There was a time I wasn’t so sure. But I kept going, and I turned out to be pretty good at it, so here I am.” Then he sighed.
I sucked briefly on my bottom lip. Was he discouraged because he hadn’t scored yet this season? I’d heard some of the talk about him and how he was playing on TV. I decided not to bring it up. “I’d say you’re pretty good at it, yeah.” I squeezed his arm. “You’re playing in the NHL.”
“What about you? You always wanted to be a singer?”
“Yes. I was singing pretty much from the time I could talk. I took voice lessons, piano lessons, did musical theater. It kind of feels like I’ve been working at it forever and I’m just starting to get somewhere.”
“I’d say you’re doing better than that.” He slanted me a smile. “So you want to be a superstar?”
I thought about that. Yes, I was ambitious, but fame wasn’t the goal. Even money wasn’t the goal. I was comfortably off from my TV show days, and my album had done well. “I just want to make music. And it’s nice when people like my music.”
He tilted his head. “Yeah. I just want to play hockey. Except . . . never mind. People love your music.”
Except . . . what? “Thanks.”
“So you’re not into fame.”
I smiled. “Not gonna lie, I like attention. Sometimes. And having lots of people love you feels pretty good. But it’s a weird thing.”
“How so?”
“Those people don’t really love me. They don’t really even know me. And I think it can mess with your mind. You can start believing the hype and thinking they really do love you, and you’re better than everyone else. Plus it’s fickle. As long as you’re doing well, everyone loves you, but do one thing to mess up and you’re out. Everyone is replaceable.”
I thought he winced at that.
“I’ve seen it happen,” he said in a low voice. “Guys who do think they’re all that and a candy bar. It goes to their heads, and they get all cocky and entitled.”
“Right? I think it’s hard for that to not happen. And you never know who your real friends are. I once had a friend who told a trashy gossip blogger that I still sleep with the stuffed rabbit I’ve had since I was a baby.”
He grinned. “Do you?”
“No! I have the rabbit. I don’t sleep with her anymore.”
“Her?”
“Her name is Cinnabunny.”
His grin widened. “This is so shocking.”
“It was mortifying!” Okay, I knew it wasn’t that big a deal, but it had been embarrassing. And annoying. “And then there was the singer who was all ‘we’re going to be best friends!’ and wanted to do stuff together all the time. Turned out she just wanted the paparazzi to take lots of pictures of us together so she’d be seen. And she wanted me to introduce her to my agent.”
“Ugh.”
“It makes it hard to trust people, which makes it hard to have real relationships.”
“Mmm.”
“You find that too?”
“Eh, not exactly. I don’t think I have the same kind of fame as you do.”
“Says the guy who was just mobbed by hockey fans.”
He nudged me gently with his shoulder. “They were there to see you too, babe. But you’re right, there are lots of women who say they love hockey but don’t really know anything about it. But I’m not really looking for a relationship anyway. I’m too selfish.”
I blinked. “Oh. Why do you say that?”
“I like being single. I like being able to go on road trips and not worry about all the responsibilities I’ve left behind, or missing someone. I like just being able to focus on hockey and not worry about anything or anyone else.”
“Well.” I thought about that. “That does sound kind of selfish.”
His head swiveled to look at me, as if he hadn’t expected me to agree with him.
I met his eyes and smiled. “But at least you own it.”
He laughed. For some reason, I didn’t really think he was a selfish person.
The skyscrapers twinkled all around us, the snow magnifying their sparkle. Lights along the walkway glowed golden. We weren’t the only people walking there, others taking advantage of a beautiful snowy Saturday evening. Restaurants and bars were lit up and busy.
We climbed the steps up to street level. Here, trees all had tiny white lights strung through their branches, twinkling in the snowy air.
“Okay to keep walking?” Chase asked. “Or we could stop for a drink somewhere.”
“Let’s keep going. We could have a drink after.”
“Perfect. I know just where we can go.”

Chase: The last thing I’d ever want to do is let my team down. After overcoming my bad-boy reputation, I was dominating on the ice. But things aren’t going so well this season, and even my parents think I’m partying again. Now I’m really worried about my career. The only bright spot in my life is the Twitter flirtation I’ve struck up with pop princess Jordyn Banks. Turns out she’s a huge hockey fan—and she’s willing to wager a date on her favorite team. . . .

Jordyn: Even though I’m an L.A. fan now, I’ve always had a soft spot for the Aces, since I grew up in Chicago. Then I lose a bet to Chase Hartman, and suddenly I’m up close and personal with a pro athlete who’s anything but soft. Not only is Chase the hottest guy I’ve ever met, he’s secretly super sweet. As if I had time for a relationship . . . yeah, right. But when I suddenly have nothing but time on my hands, he’s the only one who understands. Now, with both of our careers at stake, Chase is tempting me to put my heart on the line too.
Book Links: Amazon | B&N | iTunes | kobo | BAM |

Kelly Jamieson is a USA Today best-selling author of over fifty romance novels and novellas. Her writing has been described as “emotionally complex”, “sweet and satisfying” and “blisteringly sexy”. She likes her coffee black, her wine white (mostly!) and her heels high! She also enjoys cheering on her Winnipeg Jets during hockey season.