Today it is my pleasure to Welcome author Jodi Thomas to HJ!

From New York Times bestselling author Jodi Thomas comes the first book in a compelling, emotionally resonant series set in a remote west Texas town—where family can be made by blood or by choice 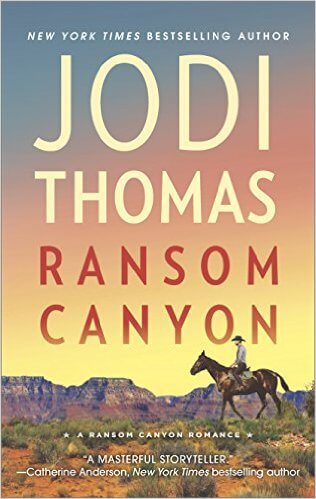 Ransom Canyon is the first novel in the new “Ransom Canyon Romance” series – what can we expect from this series in the future? What made you decide to write this series?
I wanted to write the stories of a community where all the characters interact and influence one another’s lives. We are all, to some extent, who we are because of the people around us. I want readers to step into this farming and ranching community and feel like this is their home town by the time they finish the series.
I love writing stories about people who fall deeply, passionately in love.

Welcome to a taste of RANSOM CANYON. When I began my series, I knew my first character would be Staten Kirkland. He walked into my writing bunkhouse, sat down and began to tall me his story. He’s a strong man who always tries to do the right thing, but life has dealt him his share of blows.

One rainy night, after losing his wife to cancer, his son, just 16, dies in a wreck. Shattered in grief, he turns to a woman he’s know all his life for comfort.

Quinn O’Grady was his best friend. She’s shy. Staten knows she guards terrible scars inside. As their story of finding love and hope grows both must face their darkest hour.

Amid their story, Staten must stand against modern day rustlers. He is surprised to discover an entire town stands with him.

RANSOM CANYON is the story of a small town at the crossroads between ranches where lives intertwine.

How do you decide the names of characters in your novel? There are so many interesting names in Ransom Canyon, like Quinn, Staten, Yancy, etc. Do you choose the names randomly? Do you write their stories first and then assign them a fitting name? How does this process work?

Sometimes a character walks onto the page with a name. Staten Kirkland did that. When I first saw him riding across his land during a thunderstorm, I knew Staten would be his name.
With Quinn, it was a little harder. I know she’d have to have an old fashioned name but not a common one.
Once in a while I can’t find the right name for a character and it slows down the writing. I usually solve the problem by walking through a cemetery or going down the list of most popular names for the year my character was born. For me, it’s hard work finding the right name, but once I have it I rarely change.

What are the roots of your interest in writing about cowboys? Are you a fan of old Western films (ie. John Wayne, Clint Eastwood, Randolph Scott etc.)?

I think I’ve always been interested in what the cowboy stands for and I was lucky enough to grow up around strong men who lived by a code. From the time I was about eight, I’d spend part of the summers with my Uncle Leroy and my Aunt Dixie. The first day, when I woke, he’d have a horse saddled and ready for me. I laugh and say that I must have lived the school years, but most of my memories of childhood were riding Midnight and watching rodeos.
The other day I was out watching the branding at a ranch near Fritch. The cowboys had all worked since dawn but when I stepped in the bunkhouse dining room for lunch, thirty of them stood waiting. I hesitated for a minute trying to figure out what was wrong. The cook whispered, “They’re all waiting for you to fill your plate first. That’s the way we do it around here.” The code is still there.
I love westerns and talking to cattlemen. I love the history and the honor of what they do. Of course they look great in their boots and jeans, but it is their strong hearts that win me over every time.

He wasn’t even sure they were friends some days. Maybe they were more. Maybe less. He looked down at his palm, remembering how she’d rubbed cream on it earlier and worried that all they had in common was loss and the need, now and then, to touch another human being.

The screen door creaked. He turned as Quinn, wrapped in an old quilt, moved out into the night.

“I didn’t mean to wake you,” he said as she tiptoed across the snow-dusted porch. “I need to get back. Got a hundred new head of cattle coming in at dawn.” He never apologized for leaving and he wasn’t now. He was simply stating facts. With the cattle rustling going on he might have to hire more men. As always, he felt like he needed to be on his land and on alert.

She nodded and moved to stand in front of him.

Staten waited. They never touched after they made love. He usually left without a word, but tonight she obviously had something she wanted to say.

Another thing he probably did wrong, he thought. He never complimented her, never kissed her on the mouth, never said any words after he touched her. If she didn’t make little sounds of pleasure now and then he wouldn’t have even been sure he’d satisfied her.

Now, standing so close to her, he felt more a stranger than a lover. He knew
the smell of her skin, but he had no idea what she was thinking most of the time. She knew quilting and how to make soap from her lavender. She played the piano like an angel and didn’t even own a TV. He knew ranching and watched every game the Dallas Cowboys played from his recliner.

If they ever spent over an hour talking they’d probably figure out they had nothing in common. He’d played every sport in high school and she’d played in the orchestra. He’d collected most of his college hours online and she’d gone all the way to New York to school. But, they’d loved the same person. Amalah had been Quinn’s best friend and his one love. Only, they rarely talked about how they felt. Not anymore. Not ever really. It was too painful, he guessed, for both.

Tonight the air was so still moisture hung like invisible lace. She looked to be closer to her twenties than her forties. Quinn had her own quiet kind of beauty. She always had, and he guessed she still would even when she was old.

To his surprise, she leaned in and kissed his mouth.
He watched her. “You want more?” he finally asked, figuring it was probably the dumbest thing to say to a naked woman standing two inches away from him. He had no idea what more would be. They always had sex once, if they had it at all when he knocked on her door. Sometimes neither made the first move and they just cuddled on the couch and held each other. Quinn wasn’t a passionate woman. What they did was just satisfying a need that they both had now and then.

She kissed him again without saying a word. When her cheek brushed against his rough jaw, it was wet and tasted newborn like the rain.

Slowly, Staten moved his hands under her blanket and circled her warm body, then he pulled her closer and kissed her fully like he hadn’t kissed a woman since his wife died.

Her lips were soft and inviting. When he opened her mouth and invaded, it felt far more intimate than anything they’d ever done, but he didn’t stop. She wanted this from him and he had no intention of denying her. No one would ever know that she was the thread that kept him together some days.

When he finally broke the kiss, Quinn was out of breath. She pressed her forehead against his jaw and he waited.

“From now on,” she whispered so low he felt her words more than heard them, “when you come to see me, I need you to kiss me goodbye before you go. If I’m asleep, wake me. You don’t have to say a word, but you have to kiss me.”

She’d never asked him for anything. He had no intention of saying no. His hand spread across the small of her back. “I won’t forget if that’s what you want.” He could feel her heart pounding and knew her asking had not come easy.

He brushed his lips over hers, loving the way she sighed as if wanting more before she pulled away.

“Goodnight,” she said as if rationing pleasure. Stepping inside, she closed the screen door between them.

Raking his hair back, he put on his hat as he watched her fade into the shadows. The need to return was already building in him. “I’ll be back Friday night if it’s all right.”

Rancher Staten Kirkland, the last descendant of Ransom Canyon’s founding father, is rugged and practical to the last. No one knows that when his troubling memories threaten to overwhelm him, he runs to lovely, reclusive Quinn O’Grady…or that she has her own secret that no one living knows.

Young Lucas Reyes has his eye on the prize—college, and the chance to become something more than a ranch hand’s son. But one night, one wrong decision, will set his life on a course even he hadn’t imagined.

Yancy Grey is running hard from his troubled past. He doesn’t plan to stick around Ransom Canyon, just long enough to learn the town’s weaknesses and how to use them for personal gain. Only Yancy, a common criminal since he was old enough to reach a car’s pedals, isn’t prepared for what he encounters. 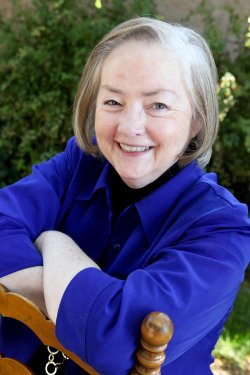 New York Times and USA Today’s bestselling author Jodi Thomas has published over 30 books in both the historical romance and contemporary genres, the majority of which are set in her home state of Texas. Publishers Weekly calls her novels “Distinctive…Memorable,” and that in her stories “[tension] rides high, mixed with humor and kisses more passionate than most full-on love scenes.” In 2006, Romance Writers of America (RITA) inducted Thomas into the RWA Hall of Fame for winning her third RITA for THE TEXAN’S REWARD. She also received the National Readers’ Choice Award in 2009 for TWISTED CREEK (2008) and TALL, DARK, AND TEXAN (2008). While continuing to work as a novelist, Thomas also functions as Writer in Residence at the West Texas A&M University campus, where she inspires students and alumni in their own writing pursuits.

« REVIEW: All I Want by Jill Shalvis
Spotlight & Giveaway: Newborn on Her Doorstep by Ellie Darkins »