Today it is my pleasure to Welcome author Karina Bliss to HJ!

Hi Karina and welcome to HJ! We’re so excited to chat with you about your new release, Redemption: a Rock Solid romance!

Hi everyone, great to be here. 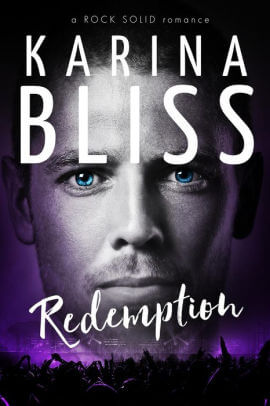 This is a story about a rock icon and an academic who fell in love while she was writing his biography. Now they’re learning to be a couple under the full glare of publicity and discovering that intimacy is more than great sex. Both have secrets that threaten the life they’re building together.

He was finally being heroic and there was no one here to appreciate it.
Which suggested he’d never be a saint.

“Zander was home and intimacy was terrifying. It was a paradox she was still learning to embrace.”

Here’s Zander’s take on that: “He hadn’t been attracted to Elizabeth when they’d first met because she was so other, with her muted makeup, her as-nature-made-me body and her open friendliness.
Most of the women he’d dated wouldn’t dream of showing him who they really were. Elizabeth hadn’t been immune to his charisma, but she saw it for what it was—his get-out-of-jail-free card.
Her self-assurance intrigued him. Her clear-sightedness turned him on.
Only when he dared her to kiss him, did he understand how dangerous desire could be when you were attracted to the whole person. ”

And here’s Elizabeth’s take on Zander:
“I love this body, but who wouldn’t.” Strong, muscular, a visual and sensual feast. She laid her hand over his breastbone, marveling that the solid thump under her palm had become as vital as the beating of her own. The fragility of life, of being mortal, was never as real as when she lay with Zander. “I love your big heart.”
She touched her lips to his warm skin, simply to feel the vibrations, teasing the nipple ring with her tongue, before rising to trail her mouth over his collarbone and along the tendon in his neck. He arched to give her better access. The man was nothing but a big cat.
“I love your wily brain.” Lightly, she bit his earlobe. “I love your stubbornness and arrogance.” She bit it again, harder.
“Oww!”
“I love your energy, your curiosity and your daring.” She kissed it better. She wished she could kiss all his pain better.
“I love the way you look at me and how you love me so recklessly and completely. I love every part of you, even the dark places you’re ashamed of, your griefs and your misplaced guilt.”

I laughed a lot writing my bondage scene, and having my done-it-all rock star nervous about my heroine’s motives. She’s been approached by one of his ex lovers and he’s trying to make her feel better by offering to… well read on.

“You asked if there was anything I hadn’t done with a woman in bed. I won’t be tied up. Any bondage games go the other way, always.”
He watched her process that.
They’d played that game themselves because conquering was stamped into his nature, and Elizabeth brought her inquiring mind wherever she went. Whenever she’d suggested it was his turn, he’d distracted her.
The only benefit of fucking too many women was how good he’d gotten at distraction.
“I’ve never let a sexual partner restrain me because I’ve never trusted anyone enough.” He was all in with this woman, but words were cheap. Zander sucked in a deep breath. “I’ll let you do it.”
“Tie you up?”
He nodded.
She put down her cup. “You’ll sacrifice yourself?”
He struggled to read her expression. “If you want to…if it’ll help.” Hopefully, the offer would be enough.
For a long moment, Elizabeth studied him. Then her mouth curved into a smile of sultry mischievousness that was for him alone. Usually, that look hit him in the chest. In this context, it made Zander nervous.
“Someday we could do it,” he qualified.
She laid a reassuring hand over his heart and he breathed a sigh of—
“Ooph.” He toppled backward onto the mattress.
“No time like the present.”
“Oh shit, you’re still mad, aren’t you?”
“Let’s find out,” she said.
“Tell you what,” he hedged. “I’ll buy restraints for your birthday next year.”
“I’m sure I can improvise.”
She disappeared into their walk-in closet and he heard the clatter of coat hangers. A minute later she emerged holding a fistful of sashes she must’ve yanked off robes. Satin and fleece; silk and terry cloth.
“Sexy,” he said, because he was feeling a little bit threatened by the glint in her eyes. “Damn shame there’s nothing to tie me to.”
The headboard was a smooth curve of dark wood that scrolled backward to meet the wall. Elizabeth had always called this room the Huntsman’s suite because of its solidly crafted dark wood furniture, and color palette of blood-red and forest green. His male ego had liked the term…until now he was Bambi.
Her answer was a grin that might have been feral. Crossing to the bedroom door, she crooked her little finger. “Follow me.”

Because it’s a laugh/cry read, and we all need more of those.

I’ve got English language rights back to one of my former Harlequins, What The Librarian Did and will be republishing it in January.

Giveaway: An ebook of Redemption AND Rise.

To enter Giveaway: Please complete the Rafflecopter form and Post a comment to this Q: What’s your (current) favorite romance and why?

The music stands, and his genius stands.

I don’t listen to his music with the same joy.

The worst part of this whole experience was seeing his fans turn on each other. Watching the Rage family implode.

Does one mistake trump a legacy? He did what he thought was right. Give him a break.

I’d love to give him a break…arm, leg, neck?

His career is over, that’s punishment enough. Go troll someone else.

Zander stopped reading and took a screen shot, adding them to a file to pass on to Luther. In fifteen minutes, he collected a half dozen.
If only his damaged vocal cords had held out; if only he hadn’t lip-synced; if only his bad-boy history hadn’t predisposed the world to doubt his motives…
The ringing of his cell disrupted his dark thoughts. One glance at caller display lightened his mood. “Hello?”
“Can I come over?” a childish voice whispered.
He smiled. “Who is this?”
“Me!” Madison Walker said indignantly. The almost six-year-old daughter of Rages’ former bassist didn’t suffer from a lack of self-confidence. Since she’d discovered his number on Mommy’s cell, she phoned whenever she managed to sneak away with it. “I need to see if the pool is ready for my party tomorrow.”
Her parents had downsized their home while her daddy formed a new band and a swimming pool was no longer in their budget. Maddie now considered Zander’s pool her personal property.
“Does Mommy know you’re asking?”
“I’ll tell her when you say yes.”
Always the pragmatist. “And where’s Mommy now exactly?”
“She’s having a shower and I’m watching Rocco.”
“And what’s Rocco doing?”
“I dunno.”
“Find your brother Maddie.”
A minute later he heard her scold in a grown-up voice. “That’s naughty… He’s got Mommy’s lipstick.”
“Take it off him and then go tell Mommy I’m sending a car for you.”
He’d barely rung off when Kayla phoned back. “Are you sure? We’re already crashing your reunion with Elizabeth by holding Maddie’s birthday party at your place tomorrow.”
“I like your noisy brats, and I need entertainment until Elizabeth gets home.” Though he was busy enough songwriting, mentoring, reorganizing his finances and dabbling in producing, there was still a void where singing used to be.
“Two weeks apart, you must be dying to see her.”
“It’s made me appreciate what it was like for you when Jared was touring with Rage.” He hesitated. Those days nothing had mattered but the band. Wives and families were inconveniences. “I owe you an apology. I finally understand how hard it is being the one left at home.” He hadn’t just screwed up his personal relationships, his selfishness had nearly destroyed the Walkers’ marriage.
“Come to think of it, you haven’t suffered enough for that,” Kayla said. “Our kids are on their way.”
After the call, he stared at his laptop screen a moment longer, then shut it down. Bottom line? He couldn’t change his past, only leave it behind him. Stay focused on building a new life with Elizabeth.
And keep her safe.

From rock icon to house husband.
From academic historian to raunchy memoirist.
They changed their lives for each other.
Now they need to change them back.

He gave up the world for love. The world isn’t ready to let him go.
Fame is a destroyer.
Which is why rock icon Zander Freedman quit music.
These days its moderation in all things, except Elizabeth Winston.
But building an ordinary life with an extraordinary woman isn’t easy.
For one, she’s deep in the snake pit he left behind.
For two, he has a stalker that stops him being by her side.
Loving her is easy.
Letting her love him is something he works on every day.
How hard does Elizabeth’s life have to be before she regrets choosing him?
What follows happily-ever-after? Love gets real.
Like every woman newly and emphatically in love, Elizabeth Winston figured she’d fix Zander’s emotional problems with her shiny, all-encompassing acceptance.
Oh boy.
Even though she’d heard her minister father counsel couples throughout her childhood, she forgot the take-away. You can’t force someone to heal before they’re ready.
Now she’s five thousand miles from the man she loves and hawking intimate details of their relationship to salvage his legacy.
Struggling to keep her own identity, and increasingly unsure whether Zander’s even on board.
Can she redeem his reputation while holding onto her career, or is she making things worse on all fronts?
And that’s before she makes a mistake that changes everything.
Book Links:  Amazon | B&N | iTunes | kobo |

New Zealander Karina Bliss has written a biography for a rock star, swapped identities with her twin, raised three orphaned children with her ex husband, worn a cow costume to a Bachelor and Spinster ball, considered marriage for the sake of a baby, and been mayor of a small town.
Oh wait, that’s her characters.

Outside her imagination, she’s always been a professional writer, first as a travel journalist and then as a romance author. Her deeply held convictions include: love conquers all; yoga pants are daywear; and what a woman really wants is a man who cleans. Unfortunately, she does not live with one, (nor indeed has raised one). Please buy her books so she can pay for one.