Today it is my pleasure to welcome USA Today bestselling author Gayle Callen to HJ!

Five Fun Facts about REDEMPTION OF THE DUKE by Gayle Callen 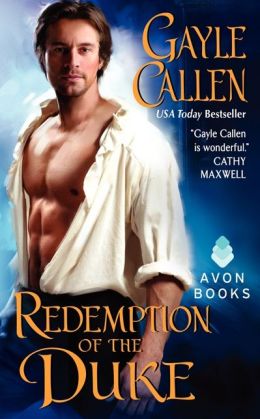 1) I did a lot of research on British involvement in India and Afghanistan in the 1840s for an earlier trilogy, “Spies and Lovers.” Whereas those heroes were spies, I went for three soldiers this time in the “Brides of Redemption” trilogy, and enjoyed diving back into all my research again.

2) So often in historical romances, our heroines are virgins, so occasionally I like to try something different. Miss Faith Cooper is not an innocent, but I wonder if you’ll guess what’s in her past…

3) I like elderly characters. In this book, the duke’s aunt wears outlandish turbans, too much jewelry, and likes to stir up trouble. I do the same thing with the widows in my contemporary Valentine Valley series, written as Emma Cane. Maybe the widows are descendants! 😉

4) Every book is different: some have villains, and some don’t. This book has a definite villain, one determined to get revenge on…someone. Nope, no hints! 😉 I really enjoy the process of figuring out characters who could be red herrings and trying to make sure the reader is totally surprised—yet can see the clues in hindsight—once the villain is revealed.

5) REDEMPTION OF THE DUKE is the third book in a trilogy, and although the book definitely stands alone, I want the reader of the previous books, RETURN OF THE VISOUNT and SURRENDER TO THE EARL, to enjoy visiting again with past heroes and heroines. They’re all guests at a wedding—but I can’t tell you whose!

Setup: The duke manipulated Faith Cooper into being his aunt’s companion, intending to help her, since he feels guilty about the death of her brother. Now they’re living in the same house. He’s taken her and his family to Vauxhall Gardens at night, where his ten-year-old niece Frances went missing, and they all fanned out to find her.

Adam caught a glimpse of Faith from behind, disappearing into the gloom of a Roman temple. Though he ducked behind a tree and watched to see if someone approached, no one seemed to be following, and the lamps didn’t extend down this path. He turned and followed her up the faux-marble stairs.
She gave a gasp and whirled around, the sequined mask pressed hard to her face as if for protection. The satin of her gown glistened by distant light, and suddenly she looked like the fairy in their supper box painting, distant, ethereal, lovely.
“Faith, it’s me.” He lowered his mask.
She lowered hers as her shoulders briefly slumped. “Your Grace, you startled me.”
“Of course you’re startled. You’re off in a remote place alone, putting yourself in danger.”
“Never mind that, we have to think about Frances. She must be so frightened. Heavens, I can find reason to feel frightened with so many strangers about. Has anyone seen her? Oh, could she have wandered to the Thames?”
Her voice was growing more fearful, her tone higher in panic.
He took her by the shoulders and gave her a little shake. “Faith, calm yourself.”
“But Frances—”
“I found her and escorted her back to her mother.”
“Oh, Adam!” she cried.
And then she fell into his arms. It was what he’d dreamed of on sleepless nights, holding her, feeling the press of her breasts to his chest, the flare of her hips in his hands. He forgot all about where they were, why they were alone together. He forgot the risk of his dishonor and her ruin. There was still a corrupt beast inside him, waiting for this chance. All that mattered was that they were alone, and she was with him, and he wished he never had to let her go.
Wasn’t this how people felt when they wanted to marry? Now that was a shocking thought, but he couldn’t be surprised.
She lifted her head and looked up at him, and the faint moonlight or a distant globe just touched her face, made the sheen of her eyes seem to glow, glistened on her parted lips.
And then he kissed her.
###
Faith had thought the duke’s appearance out of the darkness was startling, but nothing surprised her more than looking into his eyes, gleaming out of the dark shadows of his face, and realizing she’d thrown herself against him, so boldly wanton without even questioning it.
Her behavior had the usual male response—he leaned down, blotting out the world beyond, even her very conscience, and kissed her.
And suddenly she wasn’t Miss Cooper, spinster lady’s companion, anymore. She knew what to do to excite passion, how best to increase her own pleasure. She didn’t think, or she would have been lost in recrimination and regret.
She simply existed, here in Adam’s arms, languid with the knowledge of sensual pleasure. When he kissed her gently, it wasn’t enough to combat the urgent need that had been building inside her. She’d been dreaming of him, even that simple touch on her cheek, imagining his hands on her body, him filling her. She opened her mouth, boldly suckling on his lip, burning for him.
At last his tongue swept into her mouth and she met it with her own, dueled and rasped and tasted. She clutched his shoulders, pressed herself hard against him.
“Faith,” he said against her mouth.
Her hands roamed his shoulders and arms, feeling the muscles of a man who’d done more these last six years than frequent gambling dens or ballrooms.
She gasped when he broke their kiss and pressed his mouth to her forehead, her cheek, her jaw. She arched backward, letting him sweep aside the shawl from her shoulders, revealing the gown’s bodice she’d been hiding. It showed too much, and though she’d regretted it earlier in the evening, such concerns were long gone. She moaned as he traced his open mouth down her neck, licked at the hollow in her throat, traced a path to the valley between her breasts. Barely able to think, she was caught in a haze of heat and passion and desperation.
She felt … lost, overcome—and suddenly very frightened. It was as if another woman had emerged from inside her, and all along she’d barely been held back.
Faith broke away from the kiss, unable to catch her breath, Adam watching her.
“Your Grace, I—I—” What could she say, how could she explain what kind of woman she was, without risking her position, her livelihood, her very soul, if she didn’t stop herself from wanting what she should not have?
“That kiss—” he began, then his words faded as he stared at her mouth.
She realized his breathing was labored, too, that he was just as affected. But what did that matter? He was a man, and could do as he wished. And now he knew what kind of woman she was, that she was sinful, that she was no innocent.

GIVEAWAY: Print copies of RETURN OF THE VISCOUNT and SURRENDER TO THE EARL. (Previous two titles in the series).

To enter Giveaway: Post a comment to this Q: Did you enjoy reading the fun facts and the Excerpt? What was your favorite part?

A duke who needs to be tamed . . . a lady who refuses to be rescued.

Adam Chamberlin was the third son of a duke, known for gambling binges and drunken nights. No one expected anything of him . . . until tragedy strikes. Now Adam is the new Duke of Rothford, determined to right the wrongs he’s done. Except a secret in his past means helping the one woman who doesn’t want his help at all . . .

It’s not every day that a duke introduces himself to a woman sitting by herself in Hyde Park. Faith Cooper is even more surprised when Adam offers her a position as a lady’s companion to his elderly aunt. Faith refuses to be beholden to a man again—certainly not this man, who both infuriates and attracts her. But with passion simmering between them, will Faith surrender to forbidden desire?

Gayle’s novels have won the Holt Medallion, the Laurel Wreath Award, the Booksellers’ Best Award, and finaled in the National Readers Choice Awards. Her books have been translated into over ten different languages. She also writes the Valentine Valley contemporary series as Emma Cane.

Gayle resides in central New York, with her husband and three children. Besides writing, she loves to read, sing, and delve too deeply into historical research. Visit her website at www.gaylecallen.com

58 Responses to “Spotlight & Giveaway: Redemption of the Duke by Gayle Callen”