Today it is my pleasure to Welcome author Tara Leigh to HJ!

Hi Tara and welcome to HJ! We’re so excited to chat with you about your new release, Rock Legend! 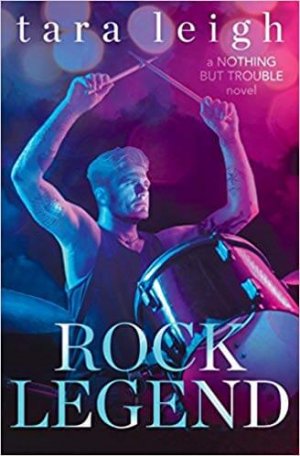 Landon Cox has made so many sacrifices for his career, he thinks he is nothing without it. Piper Hastings has spent her entire life being perfect, but when she gives Landon a second chance, her color-coded life becomes chaos. If they don’t believe in themselves, can they believe in each other?

I would have missed the call, but I’d just flung my purse into my car, the contents spilling out onto the passenger-side floor mat like a burst piñata. Despite the tears clouding my vision, it was impossible to ignore the flashing letters—DELANEY FRASER—vibrating from within a sea of tampons, makeup tubes, and spare change.
Unable to check the impulse, I reached for it, taking a second to wipe at my wet eyes before swiping my thumb across the screen. “Hi, Delaney.”

I originally thought Piper’s drive for perfection stemmed from something dramatic in her childhood but as I got to know her, I realized it was really the day-to-day that was most influential.
As my editor will tell you, I was working on Landon until the very last second! On my final read through, I realized that he would have a more difficult time committing that I’d originally believed.
Truly, what surprises me most is that Piper and Landon aren’t “real.” They are so much a part of me—their likes/dislikes, opinions, catch-phases, and speech patterns—it’s hard to believe they’re just my imaginary friends.

Definitely the pool scene. Piper has convinced herself that she deserves a night of fun with Landon after the way things ended between them six years ago and Landon is only too willing to oblige. It’s sexy and steamy and would definitely test the chemistry between the actors.

Piper represents an all too common problem in our society—women clinging to the idea that they have to be perfect to be worthy of love.
No one is perfect.
It is our differences and imperfections that make us who we are. Please, embrace them.
Life would be painfully boring if we were all the same!

This fall, I’m releasing Legacy of Lies, a reimagined Romeo & Julie set in Manhattan… if the Montagues were Madoffs. And this winter, I’m releasing Rock Rebel, the third book in the Nothing but Trouble series. I started writing it just as the #metoo movement broke out, and was inspired to write about a woman coming up against the casting couch mentality of the entertainment industry.
I am currently working on a new series for 2019. Very sexy and edgy, with a darker anti-hero readers will root for.

Giveaway: Ebook: Rock Legend (Nothing but Trouble) by Tara Leigh

To enter Giveaway: Please complete the Rafflecopter form and Post a comment to this Q: Love the one you’re with, or take a chance on the one you lost?

Piper Hastings.
Shock rippled through me, my heart pounding against my ribs.
Piper’s blonde hair fell to her shoulders, like sunshine that had been spun into silk. Those fathomless blue eyes I hadn’t seen in years—except for the countless nights they’d haunted my dreams—went from surprise to horror in seconds as she took a reflexive step back, crossing her arms in front of her chest.
I fought an urge to close the distance between us, hard. Shoving my hands into my pockets, I somehow managed to resist the itch to plow them through Piper’s hair, to wrap those golden strands in my fists as I plundered her lips.
“Piper…Long time, no see.” Judging from the animosity clinging to her skin like a shadow, I had no doubt she would sooner bite my tongue off than kiss me back. “You enjoy the show?”
One shoulder lifted in a dismissive shrug. “Your fans seemed satisfied.”
I grunted at the insinuation that Piper wasn’t one of them. “We aim to please.”
The perimeter of blue wrapped around her pupils brightened, flashing at me like a warning sign. “No one more than yourself, I’m sure.”
Piper may as well have waved a red flag at a bull. That spark inside her—it sure as hell wasn’t indifference. Proof she still felt something for me kindled hope inside my chest, triggering a throaty growl. “Once upon a time, I pleased you.”
Piper took another step back. “Once upon a time? You might want to hold off on the fairy-tale comparisons. You’re no Prince Charming, Landon.”
She was right, of course. Gallant, I was not. Never wanted to be, either. I’d grown a thick skin early in life, and the only one who’d ever gotten under it, burrowing way down deep, was the woman in front of me.
“Actually,” I said, extending my arms out in either direction. “Haven’t you heard? I’m a fucking legend.”
She leveled an icy glare my way. “You’re a fucking asshole.”
One corner of my lips quirked up. Fire and ice, my Pippa. “That, too.”
Some of her anger melted away at my response. Her expression softened, easing into a sideways smile on the way to a full-fledged grin. A soft laugh escaped through her lips, light and sweet and more beautiful than any music I’d ever made.
It was contagious.
Laughter shook the air between us. Eye-watering belly laughs that sucked the tension right out of the room. And that urge to kiss her, the one I’d temporarily managed to push down, came roaring back with a vengeance. I snaked my arm around Piper’s narrow waist, pulling her into the well of my chest. Holding tight.
Energy from our contact raced up my arms, spreading along every vein, every nerve ending. I looked down, needing to drink in the sight of her beautiful face.
The mood shifted, until we were holding on to each other for reasons that had nothing to do with ego or anger, and everything to do with lust.
Fire and ice.
Hot and cold.
Love and hate.
Our eyes met, laughter fizzling into a wary, charged silence. Piper whimpered—a nervous, desperate sound I wanted to swallow. Swipe my tongue against the doubts rising from her skin like steam off the sea. Devour her obvious reluctance and expose the desire filling her sweet center.
Piper’s spine arched away from me, as if her head was trying to tell the rest of her body to pull away but the message got lost before her feet could step back. My hands roamed down her sides, curving against her ass, fitting her tightly against me.
We fit together. Perfectly.
Even after all this time.

Most people know me as the drummer for Nothing but Trouble. Depending who you ask, I’m also a playboy, a loner, the life of the party, a screw-up, or according to my fans, “The Sexiest Rock Star on the Planet.” Apparently, I’m a legend.

Am I surprised? Hell, no. It’s a reputation I’ve earned behind my drum kit and behind closed doors. No one thought foster kid Landon Cox would become famous. Infamous, maybe. Notorious, probably. But successful? Never. No one except Piper Hastings. But I had to make a choice: my woman or my career. I picked fame and fortune… and spent every damn day since pretending I don’t regret it.

Now fate’s dropped Piper back into my life. I want to believe it’s a second chance for me – for us. But while I can give her a few great nights, I can’t give Piper a future.

Because there’s a difference between a legend and a fairy tale…
Only one of them ends happily ever after.
Book Links: Amazon | B&N | iTunes | kobo |

TARA LEIGH attended Washington University in St. Louis and Columbia Business School in New York, and worked on Wall Street and Main Street before “retiring” to become a wife and mother. When the people in her head became just as real as the people in her life, she decided to put their stories on paper. Tara currently lives in Fairfield County, Connecticut, with her husband, children, and fur-baby, Pixie. She is represented by Jessica Alvarez of BookEnds.
Website | Facebook | Twitter | Instagram | GoodReads |