Today it is my pleasure to Welcome author Cathryn Hein to HJ!

Hi Cathryn and welcome to HJ! We’re so excited to chat with you about your new release, Serenity’s Song! 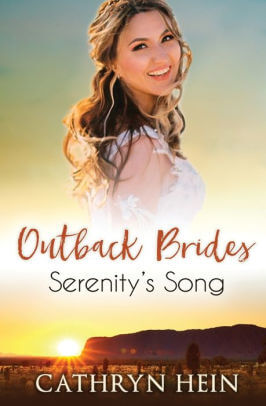 Serenity’s Song is the sequel to my first Outback Brides story, Elsa’s Stand. It’s an enemies-to-lovers and forced proximity romance set in small-town Wirralong, and features bad-boy Jesse Hargreaves, who’s returned home after yet another city scandal, and local beautician Serenity Strachan. Their bad start turns even worse when they’re trapped in a cave-in that leaves them emotionally raw but helps them see each other’s true natures. They’ll have to learn to trust before they can love, and that doesn’t come easy for either.

1/.
‘Look, I’m really sorry,’ said Jesse, spreading his hands. ‘I didn’t see you.’
‘Didn’t …’ The girl gaped at him. ‘I’m dressed in white!’
Not anymore she wasn’t, but Jesse thought it wise to keep that to himself.

2/.
Even if he was a douchebag, a girl was allowed to perve.

3/.
‘I don’t know how you concentrate with him here,’ said Marianne, jerking her head back at Jesse when Serenity caught up. ‘I’d have to change my knickers every hour.’

4/.
‘If I recall, it was you that said sleep was for sooks.’
‘Did I? I can’t remember. I was too busy being ravished.’
Ravished. He liked that word. It sounded exactly right. ‘What can I say? I like ravishing you.’

Serenity’s beauty rooms are housed in Wirralong’s historic Tobacco Warehouse and Emporium, below which, and known only to few, run a network of secret cellars. When Jesse learns of them, he can’t resist exploring, Unfortunately, he and Serenity become trapped underground when a tunnel roof collapses.

The Emporium’s secret cellars were directly inspired by ‘The Drives’ at Seppelt winery in Great Western, Victoria, which I’ve visited a few times and always thought would be fantastic to include in a book.

Hand dug by local gold miners in the mid-1860s and stretching for three kilometres, ‘The Drives’ are the largest underground cellars in Australia and are still used for storing wine today. They’re also home to an extraordinary (but harmless) fungus that gives them a unique atmosphere, and which I couldn’t resist including in Wirralong’s tunnels.

Serenity first came into existence in Elsa’s Stand, my first Outback Brides story. With her quirky hair colours, one-liners and music-bombing she became an instant favourite, and when readers demanded her story, I was happy to oblige. She’s just as fun in Serenity’s Song but it was nice to discover her vulnerable side, as well as how tough she can be.

Jesse also appeared in Elsa’s Stand, although only in a few scenes. Even then, I knew by the end of writing the book that he and Serenity would get together. They fitted! But I was stumped for quite some time over how bad boy Jesse could be redeemed. It turned out that he wasn’t as bad at heart as I thought.

The cave-in. That scene fell out of my fingers. I lived Jesse’s panic and determination as he searched frantically for Serenity in the dark. It was exciting and emotional. I loved it.

‘Serenity?’ His voice sounded weak, muffled, as if the dust was deadening the sound waves. ‘Nitty honey, I’m coming for you.’
Jesse scrabbled blindly on, feeling his way like a mole. He paused, hacked a cough into his jumper and assessed his situation. No question the rubble was getting higher. He eased around, freezing as a few rocks tumbled and crashed nearby.
He waited until the sound disappeared. The air remained troubled with painful creaks and groans. Jesse hated to think what they meant. More collapse or just the settling of the
wreckage?
It didn’t matter. Nitty did. He had to make her safe.
He crept over rubble, probing crevices, lifting anything moveable, searching, searching, whispering her name on shallow breaths.

Oh, that would be Serenity’s and Jesse’s meet-cute, which turned out not very cute at all for Serenity. I agonized over that – how to have Jesse accidentally do something awful but not so awful he couldn’t be forgiven.

‘Hey!’ yelled Serenity, as the driver powered through the turn and didn’t slow. Whoever it was either didn’t hear her call or had to be blind. She had bright orange hair and was
wearing white, for God’s sake.

With the car heading straight for her, it was either leap for the kerb or get skittled. Serenity launched, but as she took off her foot skidded on the slick road, costing her
momentum. The leap fell short. Her foot sploshed straight into the gutter at its deepest point. A whoosh of water shot up her trouser leg, causing her to yelp and stumble backward. Trying to keep balance, she windmilled one arm, the other fixed on her fast slipping box.

I think this is very much my usual style, with plenty of humour and heart and showcasing my love for rural Australia.

That people can be quite different to the person you see on the surface. There are depths to all of us.

And I’d love for everyone to finish Serenity’s Song with a big smile and a warmed heart, and an unrelenting itch to visit Australia!

I’m currently working on a full-length outback romance and suffering a terrible crush on its hero. I also have a couple of short country romance novellas I’m playing around with and hope to release early next year.

Giveaway: An ebook copy of Serenity’s Song & 3 Tule ebooks of your choice

To enter Giveaway: Please complete the Rafflecopter form and Post a comment to this Q: Serenity has an encyclopedic knowledge of pop music and loves to play specific songs to tease or cheer up her friends. What’s your favourite happy-place song and why?
I have several but one of my favourites is ‘It’s Beautiful’ by Australian band Spiderbait. That song always leaves me grinning and bopping.

He’s got a history of bad decisions—is he finally about to make the right one?

Jesse Hargreaves can’t outrun his notorious bad boy reputation. Betrayed by a woman he trusted, he retreats to his hometown, Wirralong, to serve as his brother’s best man and rebuild his life. But change isn’t easy, and it’s even harder when Jesse has to fight his fierce attraction to the maid of honour—a woman well aware of the darkness in his past.

Beautician Serenity Strachan’s flippant one-liners and vibrant hair colours are armour to protect her fragile heart. She’s always crushed on Jesse, but she’s determined to keep him and his sordid past at an arm’s length. That’s easier said than done when Jesse asks Serenity to help renovate an old property. And when they’re trapped underground in a tunnel cave-in, their emotional barriers fall faster than the tunnel walls.

When rescue arrives, they question their new emotional intimacy. Can Serenity trust this new Jesse with her heart? And can Jesse trust that Serenity will ignore the lure of a fortune to keep his secrets safe?

Cathryn Hein is a best-selling author of rural romance and romantic adventure novels, a Romance Writers of Australia Romantic Book of the Year finalist, and a regular Australian Romance Reader Awards finalist.

A South Australian country girl by birth, Cathryn loves nothing more than a rugged rural hero who’s as good with his heart as he is with his hands, which is probably why she writes them! Her romances are warm and emotional, and feature themes that don’t flinch from the tougher side of life but are often happily tempered by the antics of naughty animals. Her aim is to make you smile, sigh, and perhaps sniffle a little, but most of all feel wonderful.

Cathryn lives in Newcastle, Australia with her partner of many years, Jim. When she’s not writing, she plays golf (ineptly), cooks (well), and in football season barracks (rowdily) for her beloved Sydney Swans AFL team.