Hi Carolyn and welcome to HJ! We’re so excited to chat with you about your new release, Small Town Rumors!

Thank you so much for inviting me back to HJ to talk about my newest book, Merry Cowboy Christmas! 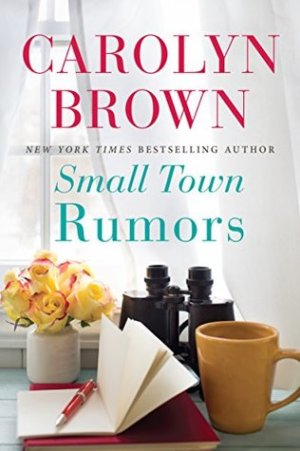 Jennie Sue was the queen of everything when she was in the Bloom High School, but it wasn’t by choice, but to try to make her mother happy. But now she’s back in town, arriving on a bus of all things, and the gossip is hotter’n that the peppers in Rick’s garden.
Rick always wanted to be a soldier and he got that wish, but his career came to a halt when he was almost killed. Now he’s back in Bloom with a body full of scars. He’s a hero but he sure doesn’t feel like one when he looks in the mirror. How could any woman love a man like him–especially Jenny Sue, the girl he’s had a crush on since high school?

Jennie Sue Baker could almost hear the rumors buzzing around the small town of Bloom, Texas when she stepped off the Greyhound bus in front of the Main Street Café that Monday at noon. On a slow day gossip hung over the town like smoke in an old western honky tonk. On a good day, in the opinion of the community, it obliterated the sun..

Simplicity!
Jennie Sue has seen the bright lights and disappointments of the other side of life and she just wants to live a simple life where someone loves her for what she is, not for what everyone expects her to be. Rick has always had a crush on Jennie Sue because he saw that side of her–from a distance–even when they were in high school.

This is a scene when Jennie Sue and Rick are working in the garden and they’ve stopped to talk about their lives. It shows their character and would be an excellent scene for a movie audition.

With wet dirt clinging to her feet that evening after supper, Jennie Sue picked green beans from vines that Rick had trained up a trellis. A hot breeze ruffled the leaves on the corn stalks and carried Rick’s humming to her ears. Then suddenly the stalks parted and his face appeared about three feet away.
The setting sun lit up the scar on his jaw and his hand went to it when he caught her staring.
“It’s ugly, I know,” he said.
“I don’t think so.” She took a step forward and touched it.
“Well, you are probably the only one who thinks that way.” He stepped out and sat down on a narrow strip of dirt separating the beans and corn. “Let’s take a little break. My basket is full and yours is almost overflowing.”
She sat down beside him. “Did you hate coming back here to farm?”
He shrugged. “I didn’t have a choice.”
“Surely there was something else,” she said.
“Maybe being a security guard but even that was iffy with this limp. What about you, Jennie Sue? What are you doing back here?”
“Trying to talk my dad into giving me a job at the company but I’m not having much luck. Whatever happened ended your career, right?” she asked.
His eyes were fixed somewhere out there near the sunset. “Yes, it did. I was treated, discharged and released. I’ve questioned God for letting that happen to me. Twenty more steps and I’d have been in the helicopter and safe with the rest of the team. But half a step back and I would have been sent home in pieces.” He still focused on something far away.
“I’ve done the same thing but we both know that it’s not God’s fault. We just needed someone to blame.” She wondered if he was seeing the whole thing again, reliving it and probably not the first time.
Rick jerked his head around to look at her. “What are you blaming Him for?”
“Letting me be sold off like a bag of chicken feed for one thing.”
“What?” Rick frowned.
She told him what her father had told her about Percy and the dowry. “No one knows that, so I’d rather you kept it a secret. It makes me feel cheap and dirty.”
Rick reached across the distance and laid a hand on her shoulder. There was that chemistry, electricity, vibes or whatever folks called it again.
“You should never feel like that, Jennie Sue.” His drawl softened. “You are an amazing woman any guy would be lucky to have beside him. Percy should be shot.”
“I really don’t care anymore. I’m pretty much indifferent to him. If they catch him then he can pay the consequences. If they don’t, then he’ll be looking over his shoulder the rest of his life,” she said.
“So have you forgiven your mother?”
“Not yet but I’m workin’ on it. If I can’t forgive her, then it’ll sit on my heart the rest of my life. I don’t want anyone, not even my mother, to have that kind of power over me.” She covered his hand with hers. “I’m glad you survived.
“Well, I’m glad that I survived, too,” he nodded. “Because I get to sit in this garden with you and we can be friends.”

Because it gives people hope to be what they are, not what people expect them to be!

Cowboy Honor comes out in September. It’s the second book in the Longhorn Canyon Series, and then Cowboy Brave, the third book, arrives in January. After that The Magnolia Inn, a women’s fiction, is on the docket, and then in 2019 there will be two more cowboy romances and two more women’s fiction books. I’m working on The Perfect Dress right now, and it will be on the shelves in 2019.

Giveaway: I’ll give away a signed copy of Small Town Rumors and a Kindle copy!

To enter Giveaway: Please complete the Rafflecopter form and Post a comment to this Q: Do you live in a small town? Would you ever want to?

From New York Times bestselling author Carolyn Brown comes a funny heartache of a novel about overcoming the past, confronting the future, and defying all expectations.
Everyone is talking about Jennie Sue Baker and the mess she made of her life in New York. The former high school queen bee—and wealthy darling of Bloom, Texas—has returned home after all these years, riding on a common bus and bearing two bounced alimony checks. In a town that thrives on gossip, Jennie’s fall from grace has shamed her mother, set the town buzzing, and caused old, jealous enemies to whisper in delight. They say she’s taken a job as a housekeeper, gotten a garage apartment, and might be crushing on Rick Lawson, a simple farmer with modest dreams.
As romance starts to bud, Jennie relishes what it means to follow her heart, find real new friends, and finally be herself—regardless of all the lying town chatter. But fate has another twist in store. Rumor has it that Jennie now stands to lose what matters most…unless she can convince Rick of one true thing—and that’s love.
Book Links: Book Links: Amazon | B&N | iTunes | kobo | Google | 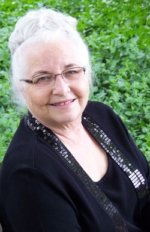 Carolyn Brown is a New York Times, USA Today, and Wall Street Journal, and Publisher’s Weekly bestselling author and a RITA finalist. With more than 90 books on the market, she’s also a three-time recipient of the National Reader’s Choice Award, a Bookseller’s Best Award, and a Montlake Diamond Award.
Carolyn and her husband live in the small town of Davis, Oklahoma, where everyone knows everyone else, as well as what they’re doing and when—and they read the local newspaper on Wednesday to see who got caught. They have three grown children and enough grandchildren to keep them young.
When she’s not writing, Carolyn likes to sit in plot new stories in her backyard with her tom cat, Boots Randolph Terminator Outlaw, and watch him protect the yard from all kinds of wicked varmints like crickets, locusts, and spiders. Visit her at www.carolynbrownbooks.com.
Website | Facebook | Twitter | Instagram | GoodReads |

« REVIEW: All Night Long by J. Kenner
Spotlight & Giveaway: An Affair with a Spare by Shana Galen »