Today it is my pleasure to Welcome author Elisabeth Hobbes to HJ!

Hi Elisabeth and welcome to HJ! We’re so excited to chat with you about your new release, The Blacksmith’s Wife!

Hi, thanks for having me back 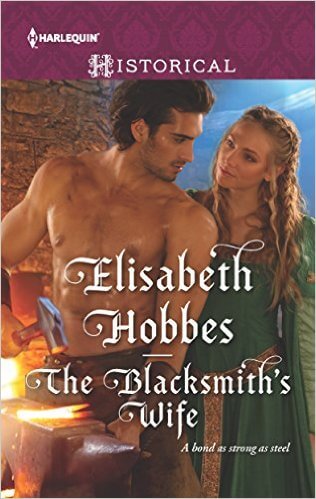 Hal’s eyes followed hers. ‘Do you fear his disapproval so much that you will not dance with me?’
‘Of course not!’ Joanna said. ‘I just don’t want to dance yet.’
He snorted. ‘I don’t believe you. You were jigging up and down like a fiddle player on a carthorse.’

Joanna is an orphan living with her uncle, a master of the smith’s guild. Her uncle never made any secret of the fact she was unwelcome in his house and she’s clung to this idealized version of Sir Roger, a knight who she believes will eventually ask for her hand.
She takes time to see that Hal is the better man but her attraction develops when she realises he sees her as more than a plaything. Catching him working half-naked in his forge helps too.

Hal is the bastard son of a baron who was brought up alongside his younger, legitimate brother with the expectation he would serve as Roger’s squire. He rejected this role and chose to learn the profession of his maternal grandfather, a blacksmith. Although Hal is fond of his brother, he disproving of Roger’s attitude towards women, knowing firsthand what could result from his affairs.
Hal is ambitious and Joanna’s connection to the guild is what attracts him initially. He knows she is in love with his brother but accepts that as the price of fulfilling his ambition.

Because Hal is a blacksmith I wanted to show him at work and make it clear that he was good at his job. The challenge was making sure I didn’t make any glaring mistakes in what he does.
I was excited about setting the book in the city where I grew up and the North York Moors which I love. York is a beautiful city that goes back to Roman times and has layer upon layer of history. It’s impossible to turn a corner without coming across some reminded of the past, from Viking Medieval guildhalls and Georgian assembly rooms. I hope I’ve captured some of the city in the story and that people visit as a result.

A tough, working hero with the odds stacked against him. Historicals often feature dukes or influential heroes but I like reading (and writing) about the ordinary people who most of us would have encountered if we’d lived back then.

Takes place at Joanna and Hal’s wedding. She has only been kissed by Sir Roger before now, who treated her with roughness and disrespect so Hal’s gentleness comes as a surprise.

‘There was stillness and the churchyard filled with an expectant hush. Finally Joanna raised her eyes to meet those of her husband.
‘I believe a kiss is customary,’ Hal said quietly.
‘Oh! Of course.’ Joanna obediently raised her face.
Hal hesitated before stepping towards her. He put his hands at either side of Joanna’s face. They were warm and rough. The hands of a craftsman, not a noble. His fingers spread wide so that his thumbs caressed her cheeks and the little fingers brushed against the base of her skull. He leaned down, closing his eyes as he moved towards her.
Much gentler than Joanna had expected he brushed his lips across hers.’

This is Joanna’s wedding night. I’d be looking to see the chemistry between the characters, how the actress captures the anxiety at the prospect of her first time and how the actor portrays the mix of desire and disappointment knowing he isn’t the man she wants to be with.

Hal’s eyes followed the movement and his brows knotted into a frown.
‘I’m not going to hurt you,’ he said.
Joanna nodded. Hal reached a hand to her cheek and stroked it softly. He took hold of both her hands, drawing them gently away from her chemise until they were by her side, still enclosed in his.
Joanna closed her eyes.
Let it be quick, she pleaded silently.
Perhaps not silently after all, as Hal abruptly released her hands. The floorboard creaked. Joanna opened her eyes to find he had moved away. He was leaning over the table with both hands resting on it and his broad back to Joanna. She crossed the room and stood behind him.
‘I’m sorry,’ she whispered.
Hal poured a cup of wine and drained it before facing Joanna.
‘You have nothing to apologise for.’ He saluted her with a bleak grimace. ‘Happy wedding day, my dear wife!’
He looked weary and remorse flashed through Joanna. The first time would be the worst but that would only happen once. With her eyes fixed on the floor she unlaced the ribbon and pulled the neck of her chemise open, slowly lowering it until her breasts were almost exposed.
‘What are you doing?’ Hal asked harshly. He seized Joanna’s hands, his grip firmer than before, and prevented her lowering the chemise any further. His eyes were flashing with fury.
‘I made promises to be a dutiful wife and within the day I have broken them,’ Joanna said.
‘Put your clothes back on,’ Hal instructed. He crossed to the bed and began to pull on his boots.
‘What are you doing?’ Joanna asked in confusion.
‘I’m going out,’ Hal said. ‘Your promises and “duty” will wait. I doubt either of us would get much pleasure out of anything we do tonight.’

Hal would go for music that would appeal to working men. Bruce Springsteen is one of my all time favourite songwriters and ‘I’m on Fire’ would definitely set the mood. It conjures up images of desperate, hot nights lying awake torn by unrequited love and is one of the sexiest songs I can think of.

I want people to decide it’s better to talk to each other when they have issues rather than steaming in private. A lot of the misunderstanding and resentment between Joanna and Hal happens because they aren’t honest with how they feel towards each other. Neither of them wants to be the first to put their heart on the line and admit how they feel but someone has to make the first move.
Lack of communication and secrets is a common romance trope (and one which I know meets with a mixed reception) but it’s something that in real life contributes to so many relationships breaking down or failing to get off the ground in the first place.

If readers decide to visit North Yorkshire as a result that would be great too.

I’m editing my next Harlequin Historical called The Saxon Outlaw’s Revenge. It’s set in Cheshire, where I live now, and takes place a decade after the Norman Conquest.
Once I’ve finished that I plan to write Sir Roger’s story. There are reasons he acts the way he does and I think he’s got potential to be redeemed as a hero, but only after he’s suffered enough to earn it.

Giveaway: One print copy of The Blacksmith’s Wife, open to readers in the US and UK.

To enter Giveaway: Please complete the Rafflecopter form and Post a comment to this Q: Joanna adopts a dog she names Simon. I’ve got two cats called Doctor Sausage and Captain Jamie Ankles.
What is the best pet name you’ve come across or thought of?

Excerpt from The Blacksmith’s Wife:

A passion forged from fire

Rejected by her favoured knight, Joanna Sollers knows she will never love again. Especially when the man she’s now forced to marry is none other than her beloved’s half-brother!

For blacksmith Hal Danby, marrying Joanna makes his life-long dream of entering the Smiths’ Guild possible, even if the secrets in his past mean he’ll forever keep his distance. But everything changes with one stolen night, and in the arms of his new bride, Hal wonders if this loveless arrangement could transform into something real…
Book Links: 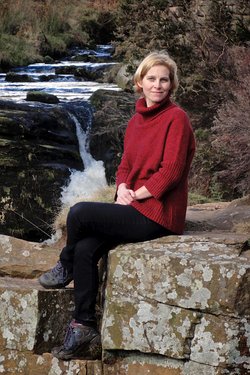 Elisabeth grew up in York, where she spent her teenage years looking for a handsome Roman or Viking to sweep her off her feet. After a degree in History and Art History she trained as a Secondary teacher, moved to Greece, returned to England and now works as a Primary teacher.

She achieved her dream of becoming a writer after finishing third in Harlequin’s SYTYCW13 and being offered her first two-book contract. The Blacksmith’s Wife is her third Harlequin Historical.

Elisabeth now lives in Cheshire with her husband, two children and two cats with ridiculous names. When she isn’t writing, she spends her time reading and is a pro at cooking while holding a book.
Website | Facebook | Twitter |

43 Responses to “Spotlight & Giveaway: The Blacksmith’s Wife by Elisabeth Hobbes”