Today it is my pleasure to welcome author Linda Francis Lee to HJ!

Finding yourself through love and laughter.

I am a plotter. Although I will say, as much as I would like it to be different, the story never turns out exactly as I plan. But I like to have a basic road map for where I am going. I generally plot in a three-act structure. It helps me with pacing, especially in that horrid murky middle!

Let’s talk about your newest release: The Glass Kitchen: A Novel of Sisters 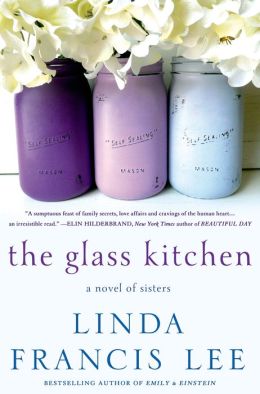 It’s about a woman who flees Texas in a storm of betrayal, only to find herself “shipwrecked” on the island of Manhattan with her grandmother’s centuries-old cookbooks. She meets the man upstairs and his two daughters, Ariel and Miranda. Once they meet, none of their lives will ever be the same again.

There is Portia who shows up in Manhattan after a lifetime in Texas. As a born and raised Texan living in New York, I love exploring the differences between the two worlds. It’s a little bit of a stranger in a strange land. There are her sisters, and also two daughters of the man who lives upstairs. Gabriel is a man who is a ruthless businessman, but between his two young daughters and Portia downstairs, his well-ordered world is turned upside down when none of them instantly do exactly as he says.

For a woman who is devastated by a betrayal in Texas, and coming to a new world in New York, Portia ended up with a whole lot more spunk than I envisioned. I love her!

I loved writing the scenes where Gabriel comes down the fire escape to see Portia. He is such a strong, alpha man, but Portia is the one woman he can’t stay away from. She makes him act in ways that he can hardly believe. How can a man who thrives on control lose that control around this one woman?

Last night he had come down the fire escape in that way he did. When she had opened the door, she found him standing there, his hair still damp from a shower, raked back with his hands. He stepped inside without asking, as if he couldn’t do anything else, a strong man giving in to her in a way that made her feel heady with a foreign sort of power. This man wanted her. This man couldn’t stay away from her. A thrill ran through her at the thought.
Standing at the door, there was no trace of the civilized businessman who stepped out of his towncar every evening. He walked into the room as if he owned it, and pulled his t-shirt over his head, throwing it to the side.
The twist in Portia’s stomach at the sight of him was so raw and primal that she couldn’t shape words.
“Portia,” he said finally, the word dragged out on a breath, then just stood there.
“Gabriel, are you okay?”
He pressed his eyes closed, blowing a hard breath out his nose. “No.”
Then he dragged her into his arms and took her over to the old wrought iron bed. They made love with a kind of ferocity that made the bed slam against the wall.

The scenes where Gabriel, who is used to people doing whatever he says, suddenly finds himself at a loss for how to deal with his oldest daughter. Commands and directives do no good. As with Portia, Gabriel must find a way to reach his own emotional center if he is going to connect with the woman he loves and his own daughters. While it was fun to watch his frustration in dealing with Portia, it was heartbreaking to watch him trying to navigate the waters with his daughter who needs him far more than she is willing to admit.

He looked at Portia. The hard planes were back in place. “What in the hell is going on?”
Portia took a deep breath. “The girls were upset when I got here. Miranda’s boyfriend broke up with her.”
He narrowed his eyes at the boyfriend mention.
“But the real problem, Gabriel, is that they feel they can’t talk about their mother.”
“I’m paying a fortune to a shrink so they have someone to talk to!”
“They need to talk to you.”

Can I pick David Gandy for Gabriel Kane? I would be happy to just look at him! As to the sisters: for Portia, I think Rachel McAdams; Olivia, Krysten Ritter; Cordelia, either Reese Witherspoon or Rose Byrne. For teenage Miranda, Sarah Hyland, and for Ariel . . . I just can’t figure out someone who embodies her age and precocious wisdom!

Allowing people you love to see your vulnerabilities doesn’t make you weak. Strength is borne out of being who you really are and being at peace with that. Too often people try to be what the world wants them to be. While you can maintain that short term, there is no way to maintain it long term without undermining yourself.

After THE GLASS KITCHEN: A Novel of Sisters, my next book will be out in Summer of 2015. It is set in an historic landmark building on Central Park West in Manhattan and on the wide-open beaches of Eastern Long Island. And it is the story of a woman who hits a bump in the road and must find a way to move forward.

I loved being here!

To enter Giveaway: Please complete the Rafflecopter form and post a comment to this Q: In your family, does everyone expect everyone else to retain the personalities they had when they were younger? Or does your family allow everyone to become older and wiser?

After hours of Portia reading her grandmother’s old cookbooks . . .

With the glass kitchen,

it takes to follow your heart and be yourself.

A true recipe for life.

Portia Cuthcart never intended to leave Texas. Her dream was to run the Glass Kitchen restaurant her grandmother built decades ago. But after a string of betrayals and the loss of her legacy, Portia is determined to start a new life with her sisters in Manhattan . . . and never cook again. But when she moves into a dilapidated brownstone on the Upper West Side, she meets twelve-year-old Ariel and her widowed father Gabriel, a man with his hands full trying to raise two daughters on his own. Soon, a promise made to her sisters forces Portia back into a world of magical food and swirling emotions, where she must confront everything she has been running from. What seems so simple on the surface is anything but when long-held secrets are revealed, rivalries exposed, and the promise of new love stirs to life like chocolate mixing with cream.

The Glass Kitchen is a delicious novel, a tempestuous story of a woman washed up on the shores of Manhattan who discovers that a kitchen—like an island—can be a refuge, if only she has the courage to give in to the pull of love, the power of forgiveness, and accept the complications of what it means to be family.

« Spotlight & Giveaway: Playboy’s Lesson by Melanie Milburne
Caption this Cover: What in BLAZES?! »