Today it is my pleasure to Welcome author Eliza Knight to HJ!

Hi Eliza and welcome to HJ! We’re so excited to chat with you about your new release, The Highlander’s Gift!

Thank you so much for having me! I’m thrilled to share my latest Highland adventure with you! 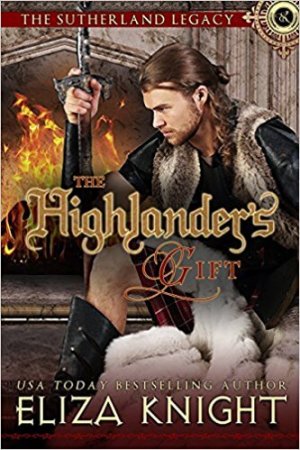 This is the first in a new spin-off from my bestselling Stolen Brides series, titled The Sutherland Legacy, in which I get to bring all five children from The Highlander’s Reward to life and love! In this book, Bella Sutherland can marry anyone she wants, and her parents are pretty adamant she needs to make a choice soon. The problem is, she doesn’t want a husband. She’s perfectly happy living at home, training with her bow & arrows, and helping her mother out with castle chores. But when her parents give her an ultimatum, she decides that a husband in name only will do, and she’s got just he man to fill that role– Sir Niall. Betrothed to a spoiled princess who despises him because of his injuries, Sir Niall Oliphant is glad to step aside and let her marry his brother. He’s more than content to fade into the background with his injuries and remain a bachelor forever, until he meets Bella, a lass more beautiful than any other, and who makes him want to stand up and fight again. They both think they’re agreeing to a marriage of convenience, but love and fate have other plans… The story starts out with a prologue of the hero and heroine when they first meet at a children’s tournament and they have to go up against each other…

“I want to be knight for the day.” A petulant lass with golden locks crossed her arms over her chest and glowered at the line of grubby lads with their wooden swords tucked into the corded belts of their plaids. For the first time in her short life, she had the chance to prove something.

I love to share fun facts about the stories I’m writing!

I’m always surprised by my characters! When I start writing a book, I have an idea of who they are, but it isn’t until I’ve written the first few chapters that I really get to know them. Consequently, the first few chapters often get deleted, because they are really me working through who they are. From the beginning, I knew that Bella was going to a strong-willed woman, and she would need a strong man, who was willing to let her stay that way. That would have been extremely rare back in those times, but I think Niall was the perfect man for her. He had his own struggles, and he needed a strong woman who could stand up not only to the darkness he was fighting, but be strong enough in herself that she could lift him up. They really compliment each other greatly, and help each other fight through the barriers that hold them back from love and happiness, to come out on the other side entirely whole!

Below is a scene from when the hero and heroine speak to each other for the first time since meeting as children. And in this scene, he has already been challenged by her father to fight in a tournament to win her hand, which he accepts, because he wants to prove to the world that though he’s lost an arm, he is still a worthy opponent. In the scene, they go back and forth between a bit of seriousness, teasing, flirting, and reveal things about each other that they might not have to anyone else.

“Why would ye choose me when ye can have any man ye want?”
Bella let out a short, sarcastic laugh and stood. He watched the gentle sway of her hips as she approached him, feeling an ache of desire deep inside.
When she stopped in front of him, the answer she gave was like an arrow straight to his heart, and it hurt like bloody fire. “Because ye canna be a true husband to me.”
He narrowed his eyes. “What is that supposed to mean?”
She gestured to his arm. “With your injury.”
“What has that got to do with being a true husband?” Och, but she had the power to ignite every emotion inside him. Anger. Desire. Compassion. Humor. Fury. Humiliation.
Her face flamed with color and she avoided his gaze. “Ye know what I mean.”
“Do I?”
Uncertain eyes met his. “Dinna toy with me, Sir Niall.”
“I fear I am lost,” he ground out.
“Then let me save ye.” There was a slight tremor in her jaw that showed she was vulnerable behind the strength and the teasing, too. But how? Why? “Now go ahead and kiss me.”
“Kiss ye?” He stared at her lush lips, wanting more than anything to do what she asked.
“Aye. I did not entertain ye. Take your prize.”
Niall stared down at her creamy face, her wide blue eyes, and felt his body stir. She was so beautiful. So cunning. So ornery. Lord, but he wanted her. Wanted to fight to prove he could have her. To prove to her he wasn’t broken. “A kiss from ye is not a prize, but a gift.”
“Then accept your gift,” she whispered.

In every story I write, I want being to escape their every day world and immerse themselves in a story that is full of emotion, passion, adventure and ultimately gives them a satisfying journey! I suppose the theme in this book, is that despite the injuries/hurts we have both emotionally and physically, we can rise above it, and find love, beating back anyone who might tell us we are not worthy. We are all worthy of love and happiness.

I have just finished the draft of The Highlander’s Quest, which is a novella that will be published first in the Ladies of the Stone anthology! After edits on that, I will begin working on the next book in the Sutherland Legacy series, as yet to be titled, but which features Bella’s oldest brother, Magnus aka Strath.

Giveaway: I would love to give away a signed, print copy of the book. (US and Canada only)

To enter Giveaway: Please complete the Rafflecopter form and Post a comment to this Q: If you could have any one ability/skill what would it be? Have you tried to obtain it?

Excerpt from The Highlander’s Gift:

This excerpt is the longer scene from the snippet above, and ends right where the scene above starts!

Betrothed to a princess until she declares his battle wound has incapacitated him as a man, Sir Niall Oliphant is glad to step aside and let the spoiled royal marry his brother. He’s more than content to fade into the background with his injuries and remain a bachelor forever, until he meets the Earl of Sutherland’s daughter, a lass more beautiful than any other, a lass who makes him want to stand up and fight again.

As daughter of one of the most powerful earls and Highland chieftains in Scotland, Bella Sutherland can marry anyone she wants—but she doesn’t want a husband. When she spies an injured warrior at the Yule festival who has been shunned by the Bruce’s own daughter, she decides a husband in name only might be her best solution.

They both think they’re agreeing to a marriage of convenience, but love and fate has other plans…
Book Links: Book Links: Amazon | B&N | iTunes | kobo | BAM |

Eliza Knight is an award-winning and USA Today bestselling indie author of over fifty sizzling historical romance and erotic romance. Under the name E. Knight, she pens rip-your-heart-out historical fiction. While not reading, writing or researching for her latest book, she chases after her three children. In her spare time (if there is such a thing…) she likes daydreaming, wine-tasting, traveling, hiking, staring at the stars, watching movies, shopping and visiting with family and friends. She lives atop a small mountain with her own knight in shining armor, three princesses and two very naughty puppies.
Website | Facebook | Twitter | Instagram | GoodReads |

« Spotlight & Giveaway: To Catch a Thief by Nan Dixon
REVIEW: Her Perfect Affair by Priscilla Oliveras »

34 Responses to “Spotlight & Giveaway: The Highlander’s Gift by Eliza Knight”