Today, HJ is pleased to share with you Maddie Dawson’s new release: The Magic of Found Objects

From the bestselling author of Matchmaking for Beginners comes a feel-good story about becoming who you were meant to be all along. 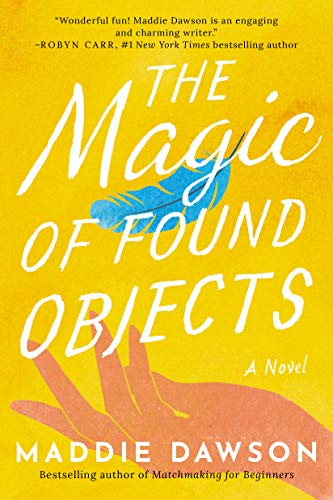 Phronsie Linnelle was conceived at Woodstock in a serendipitous liaison between a free-spirited hippie and a farmer’s son and was born with magical wonder flickering in her DNA and rationality knit into her bones. All her life she’s been torn between the two. But now that she’s been betrayed by both love and the mother she once idolized, her rational side is winning.

So when her best friend from childhood proposes that they give up on romance and marry each other, Phronsie agrees. Who better to spend your life with than your best friend? Maybe the connection they already have is love. Maybe there’s no falling to be done. But immediately after they announce their engagement, she encounters someone who makes a very charming and compelling argument for revisiting romance.

While her even-keeled stepmother argues for the safety that comes with her new engagement and her mother relays messages from the universe to hold out for true love, Phronsie must look to her own heart to find the answers that have been there all along.

Enjoy an exclusive excerpt from The Magic of Found Objects: A Novel

It’s a beautiful fall day, and so I walk through the park to my offce. I need to pick up a file about the proposed book tour for one of my more controversial authors. But mostly I’m heading there because I love going in on Saturdays and working on my novel when it’s just me. I can sit at my desk and type for hours without interruption; no Mr. Swanky to ask to go in and out, no coffee shop patrons talking out loud next to me. No people. Just me and my novel.
But then suddenly I find myself next to a playground, which feels very auspicious, filled as it is with adorable little humans, all running and laughing and shouting.
And their parents—ah, the parents seem to me to be beautiful, stylish-looking, well-adjusted adults—both men and women—holding paper cups of coffee and talking and smiling.
I am going to belong here. I’m going to be one of those women pushing a stroller with a new baby in it, while my adorable little boy runs over to the climbing structure—he’s just like his father, loves to climb. That’s what I’ll say to the mom next to me, as I take the baby out of her stroller, and I’ll smile down at the baby as she curls her little fist around my finger and coos. And that night, Judd will give them a bath while I cook dinner, and then while he does the dishes (he loves to do dishes), I’ll put the children to bed and sniff their sweet-smelling hair and nuzzle their soft little cheeks, and then I’ll work on my novel, propped up on pillows on our bed, while Judd—well, I don’t know what Judd is doing. Push-ups in the living room or something. Figuring out somebody’s physical fitness plan.
Last year when my friend Sarah told me that she couldn’t take her eyes off babies everywhere she went, I was like, “But why?” And she gave me a funny look and said, “Because they’re so cute. And they’re the future and the meaning of life, and I love the way their cheeks are so fat, and the way they have such goofy smiles, and . . .” And she went on for a lot longer than was absolutely necessary, listing every little thing about babies she could think of, even expounding about their toes and their eyelashes, until we reached the subway and I had to say good-bye to her. And when I got on the A train and settled into my seat, I felt like I’d just escaped from a very boring movie or a political rally by a not-very-galvanizing candidate.
But now. Now I get exactly what she was talking about. I really could get married to Judd. All I have to do is make a few minor, minor adjustments to my expectations, a few tweaks—and we could be just like these parents, right here in the park.
I watch for a few more delicious minutes, and then I tear myself
away.

Excerpt. ©Maddie Dawson. Posted by arrangement with the publisher. All rights reserved.

Giveaway: A print copy of The Magic of Found Objects by Maddie Dawson

Maddie Dawson grew up in the South, born into a family of outrageous storytellers. Her various careers as a substitute English teacher, department-store clerk, medical-records typist, waitress, cat sitter, wedding-invitation-company receptionist, nanny, day care worker, electrocardiogram technician, and Taco Bell taco maker were made bearable by thinking up stories as she worked. Today Maddie lives in Guilford, Connecticut, with her husband. She’s the bestselling author of seven previous novels: A Happy Catastrophe, Matchmaking for Beginners, The Survivor’s Guide to Family Happiness, The Opposite of Maybe, The Stuff That Never Happened, Kissing Games of the World, and A Piece of Normal. For more information visit https://maddiedawson.com/.

28 Responses to “Spotlight & Giveaway: The Magic of Found Objects by Maddie Dawson”