Today it is my pleasure to welcome back USA Today bestselling author Alice Clayton to HJ! 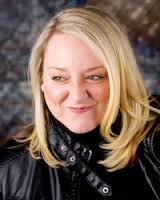 After working for years in the cosmetics industry as a makeup artist, esthetician, and educator, Alice Clayton picked up a pen (read laptop) for the first time at age thirty-three to begin a new career as author. Having never written anything longer than a grocery list, she soon found writing to be the creative outlet she’d been missing since walking away from the theater ten years earlier. She enjoys gardening but not weeding, baking but not cleaning up after, and is trying desperately to get her long-time boyfriend to make her an honest woman—and also to buy her a Bernese Mountain dog.

The Redhead Revealed is the 2nd installment of The Redhead Series, featuring Grace Sheridan and Jack Hamilton. Grace is 33, THE redhead that’s about to be revealed, and is finally living out her life long dream of being an actress. Years after LA kicked her ass in a big way, she’s back to give it another go. In this book we find her in NYC, working alongside an old 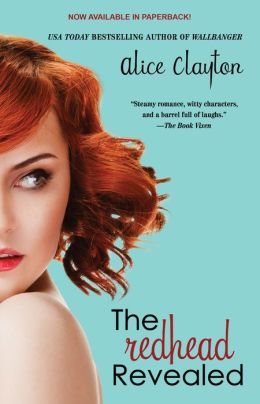 college flame in a brand new musical that’s being workshopped. And then we have Jack…mmm. Jack Hamilton, 24, is the next big thing, the It Boy, who also happens to be a Brit Boy. Hollywood’s new heir apparent, he is back in LA while his lady Grace is in NY. This book finds them not only dealing with the trials of a long distance romance, with quite a bit of the phone sexing, but also dealing with the paparazzi, and making sure they don’t find out that these two are a couple.

I think the scene I most enjoyed writing was when Jack surprises Grace in NY. Expecting him later that evening, she is stunned, and more than a bit thrilled, when he shows up at her rehearsal. Just off a plane and hot as hell.

I think what surprised me most was how mature Jack really is at such a young age. That was really fun to play with. With a 9 year age difference, Grace really should be the emotionally mature one in the relationship, but she is 100% NOT that person.

What was your hero’s biggest secret?

Jack has no secrets, he’s an open book. Grace on the other hand…

What does your heroine love most about your hero?

Grace struggles with believing that she is truly worthy of someone as magnificent as Jack, someone that most of the women in the world are in love with, and she gets him? Hard to wrap her mind around, but she has no problem with wrapping her legs…ahem. I suppose what she loves most about him is his good heart.

If you could have given your heroine one piece of advice before the opening pages of the book, what would it be?

Oh my goodness, that’s so hard to say! I think for Grace what she needs to realize is that she’s exactly right for Jack, whether she knows it or not. SO KEEP YOUR HEAD GRACE.

Giveaway: 2 print copies of The Redhead Revealed by Alice Clayton

To enter Giveaway: Please complete the Rafflecopter form and post a comment to this Q: How much is too much to know about your favorite movie star? Where should that line be drawn?

« Spotlight & Giveaway: A Little Bit of Holiday Magic by Melissa McClone
REVIEW: Take Me Home for Christmas by Brenda Novak »

49 Responses to “Spotlight & Giveaway: The Redhead Revealed by Alice Clayton”