Today it is my pleasure to Welcome author Mallory Kane & Deborah Cox to HJ!

Hi Mallory & Deborah and welcome to HJ! We’re so excited to chat with you about your new release, The Secret Christmas! 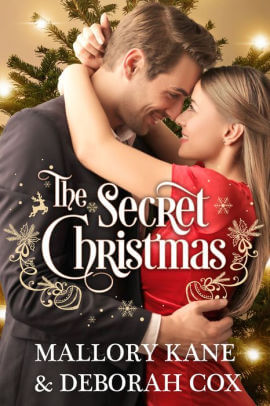 The way we initially conceived the book, and the first sentence of our pitch to Tule Publishing was this:

What if two childhood friends rediscovered each other and fell in love as they worked together to save Christmas from the Grinch in small-town Tennessee.

“This might be the best sandwich I’ve ever eaten,” Nicholas said.
Angela laughed. “It’s turkey and swiss. Settle down.” She knew what he meant. There was nothing as satisfying as being outside, breathing fresh air, and experiencing the wonders of nature, unless it was sharing it with someone special.

Our inspirations were our favorite Christmas themes. We loved the idea of a reunion story—two little kids who meet again at Christmas after two decades. We wanted the hero and heroine to take Christmas back from the villain, a Grinch-like character, whose heart seemed frozen in ice.

From the beginning, we knew that Angela was determined and energetic. She had inherited the restaurant and bakery from her mom and she wanted to continue to serve the people of Christmas Valley as well as the visitors from the lodges just as her mom had. As she got to know Nicholas again after so many years and struggled to keep the town’s Christmas celebration secret from him, it became obvious that Angela had not only taken over the restaurant and the responsibility for the Secret Christmas, she had taken on the job of protector for all her friends in Christmas Valley, because the townspeople had become her family.

At the beginning of the book, Nicholas was stunned and dismayed at what had happened to the town of Christmas Valley, which he recalled as the place where Christmas lived. He could barely stand to walk down the bare streets and look in the undecorated windows…

Our favorite scene when Angela has just tried to hide a bunch of mistletoe when Nicholas unexpectedly walks in. Here’s a snippet:

“Nicholas. Good morning,” she said. It was too late to stop Tiffany’s Nicholas Conspiracy, so she gritted her teeth and tried to sound charming. “How are you doing?”
“Morning.” He bent and picked up something off the floor. When he straightened, he held a sprig of mistletoe that had broken off. “You dropped something,” he said, looking at it. “Isn’t this—”
“It’s imported parsley,” she said quickly, wincing inwardly at her words. Probably the stupidest thing she could have possibly said. There was little chance that Nicholas didn’t know mistletoe when he saw it.
Sure enough, he gave her a quizzical look. “Imported parsley?” he echoed.
“Yeah,” she said as she snatched it from his hand and sniffed it as if it were as fragrant as basil. “From somewhere in Scandinavia. It’s supposed to be the next big thing for a garnish.”
He was still frowning at her. “I see.”

The most difficult thing about writing this book was how to include Christmas scenes and the Christmas spirit when the setting, Christmas Valley, was prohibited from displaying anything to do with the holidays. So we wrote a lot of our scenes at a nearby ski lodge, like this one:

“Coming here, with all these Christmas decorations, just makes me sadder for Christmas Valley,” he said.
Angela looked around at the decorations that filled the room, the chandeliers decked with ribbon and holly. A piano played “White Christmas” softly. “Yeah. You get used to it.”
At the same time, they said, “No, you don’t.”

Both of us are usually drawn to darker stories, where our protagonists will face life and death decisions at some point or points in our books. For The Secret Christmas, we definitely had to change our mindset. The Secret Christmas is a sweet romance, it embraces the joy and peace of the Christmas season and the sweet love among friends and family as well as romantic love of the hero and heroine. We absolutely loved writing The Secret Christmas. We enjoyed creating the town of Christmas Valley and all the people in the book, and we’re looking forward to writing another Christmas Valley book.

We hope that readers will come away from reading The Secret Christmas with memories of magical Christmases they’ve experienced and a renewed anticipation of the joy, excitement and love that we all hope will be a part of our holiday season.

Right now we’re brainstorming and plotting a new Christmas book that we hope can come out in 2021.

Giveaway: An ebook copy of The Secret Christmas & 3 Tule ebooks

To enter Giveaway: Please complete the Rafflecopter form and Post a comment to this Q: We hope you’ve enjoyed hearing about our book, The Secret Christmas. Thanks for giving us the opportunity to talk about our experience with writing it. Now we’d like to hear from you. What is your favorite part of the holiday season? The food? Hiding presents? Watching the children as they participate in the festivities? The joy of visiting with your friends and family (even if virtually?) Donating to others?

Excerpt from The Secret Christmas:

“Uncle Terence?” Nicholas stared at the sight before him. Terence Frost was dressed in a satin dressing gown and sitting in a wheelchair in front of a cozy fire, his right leg in a full cast propped up by the extended leg of the chair. He was drinking coffee and eating a scone.
“Nicholas, you’re here. You look like you drove all night.”
Apparently, Uncle Terence still had a knack for making everything he said a criticism. “It’s six hours from Atlanta to Christmas Valley, so yeah. I did. Madsen said it was an emergency.” Nicholas had made the six-hour trip in five and a half, expecting to find his uncle at death’s door. “But you look like you’re doing well.” His leg was obviously broken, but his color was good and he seemed almost lighthearted. This was no emergency.
Terence snorted as he reached for another scone. “I’ve been better.”
“I’m not sure why I’m here,” Nicholas said. “Madsen said you were seriously injured. That you had just gotten out of the hospital and you needed me.”
“I do need you,” Terence said. “And I am seriously injured. I fell on a rock while skiing and broke my leg in three places. Three places. It took three surgeries to set it.” His mouth tightened. “Sit down, boy. Sit down. It’s hard to look up at you from this stiff chair.”
Nicholas sat uneasily in an old, hardback chair. What he really wanted to do was get in his car and head back to Atlanta. He felt a peculiar dread settle in his chest. He wasn’t here to help with his uncle’s recovery. His uncle had something else in mind, and Nicholas knew for certain he was not going to like it. “I’m sorry that happened. When did you get out of the hospital?”
Terence waved the hand that held the scone, scattering crumbs. “That’s not important. I have something I need you to do for me.”
“Yes, sir?” Nicholas felt his shoulders tighten and a vague pain started in his neck. The comment he’d made to Ben came back to him like a portent of calamity. My troubles may be just beginning.
“I won’t go into all the specifics. You don’t need to understand everything.” Terence shifted and winced in pain. “Suffice it to say I’ve brought you here because, as you see, I’m incapacitated, and Madsen is a stubborn ass. I need you to be my spy, for lack of a better word.”
“What?” Nicholas stared at his uncle, sure he’d misunderstood. “Did you say spy? Are you—” He started to say crazy, but the determination and anger in his uncle’s expression stopped him.
Terence finished his coffee and rubbed his forehead. Suddenly he looked tired and pale. “I own most of the assets in that town down there. Most of the shops are housed in buildings owned by me, which means they are my tenants. Their leases contain language that prohibits them from displaying anything related to Christmas in any visible spot in the town. That means no lights, no ridiculous—” he waved his hand “—garlands or tinsel or trees.”
“What?” Nicholas blurted out again.
“I’m going to take your monosyllabic outcry as an expression of surprise rather than an actual question, since I’m sure you understood what I just said,” Terence said.
“But that’s crazy. You can’t do that.”
“Oh, I assure you I can. However, since I’m bound to this chair for the present as well as the near future, I can’t very well enforce the ban on Christmas this year, so I need you to do so in my place.”

Can two childhood friends return the spirit of Christmas to this small town?

When Nicholas Frost comes back to Christmas Valley, he’s shocked. The town he fondly remembered as a Christmas wonderland is now completely barren of the season. He learns that his landlord uncle banned his business tenants—everyone in town—from openly celebrating Christmas after his wife died. When his uncle demands that he spy on the townspeople, Nick is torn. Should he choose family loyalty or his heart?

Christmas Valley restaurant owner Angela Corker isn’t happy to see Nicky Frost again. After his uncle banned Christmas, the residents have been struggling financially. So every year she puts on a “Secret Christmas” celebration for the town. Nick is beyond handsome and friendly, but can she trust him with her secret when his uncle is the town Grinch?

They both have secrets, but as they join forces to bring back the joy of Christmas, they discover so much more than they were looking for.

Mallory Kane – Mallory Kane has two very good reasons for loving reading and writing. Her mother was a librarian, who taught her to love and respect books. Her father could hold listeners spellbound for hours with his stories, including of World War II. His WWII stories are memorialized in the Library of Congress. He was always her biggest fan. With a Golden Heart nomination in the far distant past and several more recent awards, including a Booklover’s Best Award, Mallory is amazed and grateful that she gets to make up stories for a living. She has published more than 40 novels for Harlequin Intrigue, Tule Publishing and her independent projects. Mallory’s latest novel is a sweet contemporary for Tule Publishing, The Secret Christmas, written with fellow author Deborah Cox. It just might be her current favorite of her novels. Mallory lives in Tennessee with her Renaissance Man and two Renaissance cats.

Deborah’s first love is writing. She won a short story contest at the age of eight, and the rest is history. Her other loves are photography and painting. Her intuitive abstract paintings hang in homes in Alabama, Florida, and Louisiana.

Deborah lives in Huntsville, Alabama with two adorable Shih-tzus, Harry and Sally. She loves hearing from readers and can be found on Twitter, Instagram, and Facebook.

« REVIEW: The Boy Toy by Nicola Marsh
REVIEW: His princess by Christmas by Therese Beharrie »