Today it is my pleasure to Welcome romance author Jeffe Kennedy to HJ!

Hi Jeffe and welcome to HJ! We’re so excited to chat with you about your new release, The Tears of the Rose! 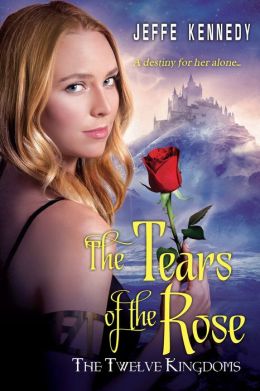 The youngest and most beautiful princess faces the ashes of her Happy Ever After and discovers that neither she, nor the world, are what she thought.

Ami is pregnant in this book – I don’t think that’s a spoiler – but I’ve never been pregnant, myself. So I asked about morning sickness on Twitter (as you do) and had probably the longest, most involved response ever. Tons of women had stories about how early in the pregnancy the morning sickness got them, what foods did it. It was amazing. I even storyfied some of it.

This is Amelia’s story. Her beauty has been praised since she was born, adulation that went full power around the time she turned twelve. That’s had a profound effect on how she sees herself. In many ways she’s bought into her own press. The story is mainly about her, though the librarian, Dafne, accompanies her on much of her journey. Her oldest sister, the heir and warrior, Ursula, is there to kick at her to begin with, and she finally reunites with the middle sister, Andi. There is also the White Monk, who is a fascinating character. I hate to say too much about him, because it can be spoilery.

I expected Ami to be difficult to write. I knew she’d be unlikable to begin with and that she’d have a long way to go to redeem herself and I wasn’t at all sure how that would happen, except that she’d suffer quite a bit before she opened her eyes. What I didn’t expect – and the White Monk says this to her – was that she’d turn out to have so much grit. She has the tenacity and fight of a badger behind her pretty face. That absolutely surprised me.

With a sensation of a bubble popping, we emerged into full summer. The White Monk looked around in unbelieving amazement, then down at me, the radiance of his joy as palpable as the welcoming sunshine. He let me down, then tossed his head back, whooping with a full-throated cry of celebration, much like a wolf baying at the full moon.
A laugh escaped me, released from its barbed prison by his sheer exuberance. He snapped his gaze down to me.
Then seized my face in his big hands and kissed me.
Shock held me still for a blink, and then all that yearning, that bottled-up longing, surged up to meet him. I opened my mouth, giving in to the hard, seductive strength of his. Just as in my lurid fantasies, he wasn’t gentle or sweet or reverent. He didn’t treat me like some fragile doll to be protected. He devoured me, drinking me in, and my entire body melted into a hot stream for him to consume.
He broke away from me and I staggered, momentarily unanchored and bewildered.

Ha! I often laugh and cry while I write – I thought it was just me! This scene, the night after they buried Hugh, Ami’s late husband, made me cry.

That night I lay alone in our huge bed, the fire casting lurid shadows against the looping lace above me. It seemed the satin rosettes, cunningly formed to echo Glorianna’s roses, mocked me with their loveliness. Outside the wind howled in the turrets. A full gale had hit just after Hugh’s burial, sealing us inside Windroven as surely as the castle’s dead were entombed below.
I curled on my side under the extra blankets my ladies had piled on. Surely I’d never be warm again. They’d covered the glazed windows with tapestries to keep out the chill, but the wind is clever. It snuck through, as it had snaked through the tombs. It seized me that Hugh would be cold down there, all alone.
Here I lay in our bed, while he had only the freezing comfort of stone and rotting roses. It gnawed at me. My fingers curled with the gut-wrenching need to tear the stones apart, to unbury him from the crushing weight of the tomb. He should be here with me, cuddling against my back.
The tapestry rippled, the wind clawing at it.
In a flurry, I hurtled out of the covers, pulling on my heavy velvet robe. It wasn’t mourning gray, but Hugh wouldn’t care. I burst into the anteroom, looking about for my boots. Ursula sat in a chair by the fire, a wine goblet dangling from her hand. She’d been staring at the flames, deep in some memory, but her keen gaze found me.
“Where are you going, Ami?” She spoke gently, as she had when Andi had been so afraid, when the Tala first found her.
I wrapped my arms around myself. “Where are my ladies?”
“Asleep. As you should be.”
“Why aren’t you?”
She grimaced. “Can’t. So I volunteered to sit with you.”
“I’m not a baby who needs to be sat with.”
“You’re grieving, Amelia. People go out of their heads with it. There’s no shame in needing people around you.”
“What do you understand about it?” As if summoned by her words, the grief rose and caught me around the throat, choking my voice away.
“Enough that I’m not letting you go anywhere near those cliffs.”
“That’s not where I was going…”
She only gazed at me, eyes dark with sympathy, the salt scent of it soft on the air. I couldn’t say that I meant only to visit him, to keep him company. The wind howled, mocking me.

Hmm. I think I’d use the excerpt below, because it shows a great deal about both the White Monk and Ami – and would test the sexual tension between the actors.

I’d tell the White Monk not to be so hard on himself, but I wouldn’t be able to give Ami any advice because she’s not ready to hear it at that point. She has to get there on her own.

Right now I’m writing the third book in the FALLING UNDER trilogy, UNDER CONTRACT. I hope to have that done before Christmas and then I’m thinking about writing Dafne’s book. Those who have read THE MARK OF THE TALA, at least, know who I’m talking about. ☺

Giveaway: 2 Print copies of The Tears of the Rose (Twelve Kingdoms Series #2)

To enter Giveaway: Please complete the Rafflecopter form and Post a comment to this Q: If you had (or have had) a daughter who was exceptionally beautiful, how would you raise her to handle that?

Three sisters. Motherless daughters of the high king. The eldest is the warrior-woman heir;the middle child is shy and full of witchy intuition;and the youngest, Princess Amelia, she is as beautiful as the sun and just as generous.
Ami met her Prince Charming and went away to his castle on the stormy sea-cliffs—and that should have been her happily ever after. Instead, her husband lies dead and a war rages. Her middle sister has been taken into a demon land, turned into a stranger. The priests and her father are revealing secrets and telling lies. And a power is rising in Ami, too, a power she hardly recognizes, to wield her beauty as a weapon, and her charm as a tool to deceive…

Amelia has never had to be anything but good and sweet and kind and lovely. But the chess game for the Twelve Kingdoms has swept her up in it, and she must make a gambit of her own. Can the prettiest princess become a pawn—or a queen?

Buy links can be grabbed here: http://www.jeffekennedy.com/tears-of-the-rose/ Pick and choose the ones you like!

Jeffe Kennedy is an award-winning author whose works include non-fiction, poetry, short fiction, and novels. She has been a Ucross Foundation Fellow, received the Wyoming Arts Council Fellowship for Poetry, and was awarded a Frank Nelson Doubleday Memorial Award. Her essays have appeared in many publications, including Redbook.

Jeffe can be found online at her website: JeffeKennedy.com, every Sunday at the popular Word Whores blog, on Facebook, and pretty much constantly on Twitter @jeffekennedy. She is represented by Connor Goldsmith of Fuse Literary.

50 Responses to “Spotlight & Giveaway: The Tears of the Rose by Jeffe Kennedy”