Today it is my pleasure to Welcome author Mimi Jean Pamfiloff to HJ!

Hi Mimi and welcome to HJ! We’re so excited to chat with you about your new release, The Ten Club!

Hello, Everyone! And thank you for having me back, HJ! 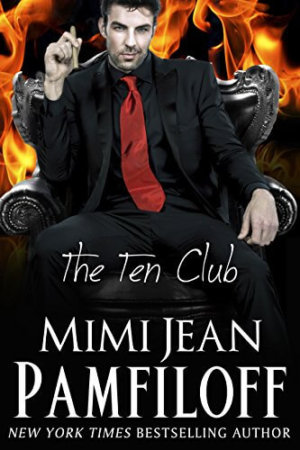 Well, this is the 5th and FINAL installment of the USA Today Bestselling King Series about “The man who can find anyone or anything. For a price.”
Sadly, after a very long journey to find happiness, King dies, leaving behind his new wife, Mia, and their baby. Mia is destroyed by this, but things are about to get much worse. Because King is now back! He looks like the same stunning man, but he doesn’t remember her. OH! And he’s completely evil.
Mia has to decide what to do, because he’s a threat to everyone she cares about.

(Can be read as a standalone, but best if read sequentially.)

I rolled out of bed, feeling unrested and sore and out of my mind with grief. It had been another rough night for me, one of many to come, I assumed. But what else could I do?

The entire book is a surprise, so let me ask if you COULD HANDLE LOVING A KING? I think most of us would say yes—just as long as he’s a good man. And it wouldn’t hurt if he was nice looking, too. Well, King is a king. He’s smart, rich, loyal, and very handsome. Sound good so far?
What if I were to tell you that he’s also lived most of his life as a cursed ghost? And that he used to be so evil and cruel that it drove him mad?
How’s our King sounding now?
Our heroine, Mia Turner, certainly had moments where she doubted her sanity for getting involved with him. But once she saw what life could be like if she could cure him, she would walk through the fires of hell to help King.
But in this 5th book, Mia has been through a lot. She’s older, smarter, and now she’s a mother. She’s no longer that starry-eyed young woman who will risk everything for the man she loves.
Or is she? I think this is what she has to figure out. How far is she willing to go? How much is she willing to risk?

This is tough! Dang it. Everything past chapter one is a spoiler! I guess that leaves us with my grocery list. Can we make a movie of that? Pears. Oatmeal. Bread. Wow, not such a great movie. But the book is fun!! LOL.

I HOPE the book leaves people feeling complete mind-f**ked, but in a good way. It should also make people really think about the topic of secrets and how they shape our worlds.

I am finishing up LEATHER PANTS (Romantic Comedy), the next installment of the HAPPY PANTS CAFÉ SERIES. It is about a rebellious rock star and an ambitious female judge whose livelihoods become completely dependent on each other. And it all goes so SOOOO wrong! LOL.

To enter Giveaway: Please complete the Rafflecopter form and Post a comment to this Q: Here’s a nice, dark question to ponder: Could you forgive your husband for sleeping with a woman he despises in order to save his own brother? Do you think your husband would ever forgive himself?

Excerpt from The Ten Club:

I rolled out of bed, feeling unrested and sore and out of my mind with grief. It had been another rough night for me, one of many to come, I assumed. But what else could I do?
You’ll find coffee. Then you’ll try to find a way to keep breathing. Because that was what widows did.
As I stumbled toward my bedroom doorway to go check on the baby, the phone rang on my nightstand. The caller ID said Mack.
“Hello?”
“Mia, I don’t know how to say this, but he didn’t stay dead. He’s back, but he’s not him anymore.”
“What?” I blinked. “Could you repeat that?”
“King is back, Mia. And he made it clear he’s not letting me end 10 Club.”
“I’ll call you,” I started hyperventilating, “back,” and passed out.

HE WANTS TO OWN HER. King doesn’t recall dying and he definitely doesn’t recall this feisty woman Mia who claims to be his wife. But he’s happy to make her his if she’ll be obedient and loyal. After all, a king needs a queen, and now that he’s back from the dead, this evil billionaire has big plans.

SHE WANTS HIM DEAD. Mia Turner made painful sacrifices to save the love of her life from his cursed hell. So when he promised to love and protect her always, she believed him. But after he trades his life to save his brother, she’s left all alone with a baby and a broken heart. Until he returns. Evil, more powerful, and with absolutely no memory of her.
Can she find a way to bring back the man he once was, or will she have to send him back to hell?
Book Links:

MIMI JEAN PAMFILOFF is a USA Today and New York Times bestselling romance author. Although she obtained her MBA and worked for more than fifteen years in the corporate world, she believes that it’s never too late to come out of the romance closet and follow your dream. Mimi lives with her Latin Lover hubby, two pirates-in-training (their boys), and the rat terrier duo, Snowflake and Mini Me, in Arizona. She hopes to make you laugh when you need it most and continues to pray daily that leather pants will make a big comeback for men.
Website | Facebook | Twitter | Instagram | GoodReads |

« Spotlight & Giveaway: Too Wild to Tame by Tessa Bailey
REVIEW: The Billionaire of Coral Bay by Nikki Logan »