Today it is my pleasure to Welcome author Michele Hauf to HJ!

Hi Michele and welcome to HJ! We’re so excited to chat with you about your new release, The Witch and the Werewolf! 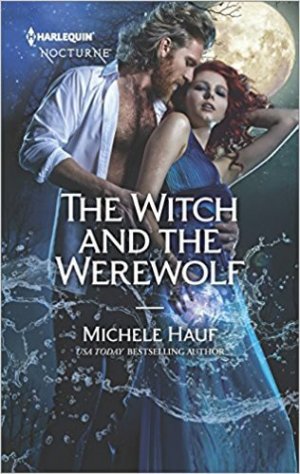 The third in my The Decadent Dames, mini-series, this is set in the Halloween Capital of the World where the heroine works at a local brewery stirring up…trouble—ahem, brews. She’s really not looking for a hero but he charges into her life anyway, all wolfie and scary (and she in but a towel at the time). What develops is a touching story filled with secrets and dreams and…there’s even a secret baby!

Feet floating up so her toes peeked out of the frothy bubble bath, Mireio Malory wiggled the little pink beads as she sang to the music filling her bathroom. She sang along with the Meghan Trainor tune about loving herself and not having time for a man because she was all about having fun. A fitting theme song for Mireio at the moment.
Guys were great, but she didn’t have the time to focus on a relationship if her plans to achieve immortality came to fruition.

Lar Gunderson is one of my favorite heroes. He’s just so big and alpha and…snuggly. And he’s got a lot of problems. I may have overwhelmed him a bit, but he’s so tough he rises to meet the occasion. Most of the time. He really allowed his true heart to show as the book progressed, and that meant a lot to me to see his vulnerabilities.

Probably the opening scene, which I’ll include below.

This book was actually very personal to me. While I believe it is one of my lighter books (I really had a great time with the hero and heroine’s chemistry) the hero also represents my husband. While I was writing this, he was given 8-10 months to live by the Mayo Clinic doctors. (He has stage-4 cancer). When Lars (the character) came to me, my husband was in month number eight of that dreadful sentence. I didn’t want to write this story, but then, I really needed to. It was my way of grabbing any doctor who would have the audacity to give a man a death sentence by the shoulders and shaking him. It was cathartic. Now, two years later, my husband is still here. Every day is a blessing. We don’t know what tomorrow will bring, but simply live life while we have it.
So while that might sound like a downer, I really want readers to live and recognize the blessings and have fun with life.

I’m finishing up Tempting The Dark for Nocturne, and then I have one final Nocturne left to write.
The other two books I have out this year following The Witch and The Werewolf are:

November: A Kiss of Frost – this is a re-release of a novella featuring a Frost god
December: The Chameleon – #3 in the Elite Crimes Unit series.

Giveaway: I have a paperback set of The Decadent Dames series: Taming The Hunter, The Witch’s Quest, and The Witch and the Werewolf

Excerpt from The Witch and the Werewolf:

This is the opening scene:

The werewolf’s fate rested in the witch’s hands…

Mireio Malory is a quirky witch who’s on a quest to complete a dark spell that will grant her immortality—at the expense of a live vampire’s heart. She’s ready to conjure that dangerous and life-changing spell when she meets a lone werewolf and beekeeper.

Lars Gunderson has secrets of his own. His alpha allure is obvious, but Mireio senses that there’s something more to him than his raw sexiness. When Lars entrusts her with a devastating revelation, Mireio has to make a choice. Will she sacrifice the most potent magic she’s ever worked on to be with the man she loves?
Book Links:

Award-winning author Michele Hauf has published over 80 novels in historical, paranormal, and contemporary romance, as well as writing action/adventure as Alex Archer and erotica as Michele Renae. The launch author for numerous series at Harlequin, she likes writing in a variety of genres and instead of ‘writing what she knows’ prefers to write ‘what she would love to know and do’ (and yes, that includes being a jewel thief and/or a brain surgeon).
Website | Facebook | Twitter | Instagram | GoodReads |

31 Responses to “Spotlight & Giveaway: The Witch and the Werewolf by Michele Hauf”