Hi Joanne and welcome to HJ! We’re so excited to chat with you about your new release, Trapped with the Texan!

Thank you so much! It’s great to be here. 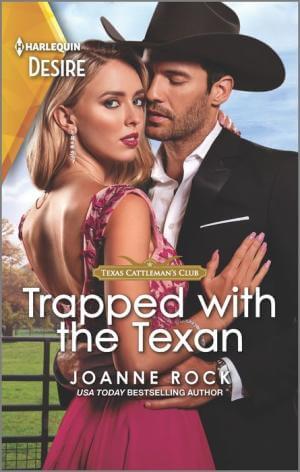 This is part of the Texas Cattleman’s Club: Heir Apparent series, so the story continues a larger storyline set up in earlier books. But the romance absolutely stands alone. My heroine, Valencia, is trying to persuade the hero, Lorenzo, to invest her horse rescue start-up. A tornado strikes while he’s at her ranch, stranding them together and the time they spend alone in the dark shifts the dynamic between them. It’s hard to go back to just a professional relationship, but the heroine doesn’t want to jeopardize her rescue, and the hero has his own reasons for needing to keep his distance. This is a sexy, emotional read!

But a moment later, the lights in the shelter went out, leaving them in total blackness.

I love this scene-ending line because *of course* that’s what we’re waiting for when the hero and heroine are trapped together in a storm!

The hero is attracted to the heroine’s passion for her work helping horses. Her compassion and drive are compelling for him.

The heroine may have noticed his impressive physique first! But after that, she sees his business acumen and his family values, both of which appeal to her tremendously having a rough start in life herself.

The scene where the heroine discusses her fear of tornadoes definitely got me by the throat. Here, she relates it to the hero, trying to explain why she panicked at the start of the storm:

“You don’t have to tell me. Especially if it upsets you.” His voice sounded strangled.
She closed her eyes for a long moment, examining her feelings. But she felt close to him. Safe in his arms. And she wanted to share something after he’d confided in her about his unhappy engagement .
When she opened her eyes again, she murmured, “It’s okay. I want to tell you.”
Sinking into the comfort of the darkness and the steady slug of his heartbeat beneath her ear, she continued. “They were a volatile couple, young and poor. My mother was a teenage runaway when she met my father. He met her in In a bus station, . That was where he taught her how to panhandle to distract people so he could pick their pockets. My earliest memory is of being in my birth mother’s arms while we—while she she—ran from the cops.”
Counseling had taught her how to separate herself from the actions of her parents. But no amount of therapy had taken away the sudden awful gut clench she felt to this day upon seeing uniformed police officers. Or the guilt that went hand in hand with the reaction.
Lorenzo’s hand slid to her shoulder and gave a gentle squeeze. “Valencia—”
“Just let me get through this, okay?” she pleaded, wanting to have the basics shared so she didn’t have to revisit the memory. “The last time I spent with them was in a tornado. Locked in a bathroom while they fought over who should have to stay with me. Neither of them wanted to.” The snippets she recalled from that argument were the most vivid of her childhood. “But the angry words stopped when the tornado ripped most of the house away.”
Lorenzo’s arms both wrapped around her. He murmured some quiet words of comfort against her hair.
“They were both injured, I think.” The aftermath was hazy for her, the timeline less linear. “I remember my mother saying she was going to find help afterward, and for me to stay there—in the bathtub. But she didn’t come back. Rescue workers found me two days later and that’s how I ended up in foster care briefly until I was adopted.”
She didn’t dwell on those two days alone. The period spent in the eerily quiet remnants of their small mobile home were was frightening, but at least the time seemed to pass quickly. Perhaps because she’d been in shock and numb to everything. She wouldn’t have been able to leave the old cast- iron tub even if she’d wanted to since debris had fallen over it, trapping her there.
For a moment, they remained in silence. The night sky had lightened by degrees while they spoke, a pinkish-gold glow warming the horizon.
“My God,” he said finally, huffing out a rough exhale. “No wonder you were terrified in the storm last week. I can’t imagine how traumatizing that must have been after what you went through.”
His words soothed her. Yet, beneath her ear, his pulse sped faster. Was he troubled about what she’d confided? She tried not to be defensive, but she was all too aware of how many people judged her for her parents’ sins.
She straightened from where she’d been curled against him, looking into his dark eyes for the first time since she’d began her story. His gaze darted away from hers…

For the sexy, caring hero! Trapped with the Texan gives readers the chance to spend time with relatable characters trying to make the world a little bit better of a place.

Right now, I’m working on a new series that will be out in 2022, tentatively titled The Ranch Inheritance. But before that, readers can look forward to my next two Brooklyn Nights books in the Desire line- Ways to Tempt the Boss (9/21) and The Stakes of Faking It (11/21). Then, next spring, I’ll be back in Royal, Texas for another Texas Cattleman Club story, The Rancher’s Reckoning.

Giveaway: The first two books of my Brooklyn Nights series- A Nine-Month Temptation and Ways to Tempt the Boss (open INTL. US winners will receive print copies, INTL winner will receive digital downloads of the books)

To enter Giveaway: Please complete the Rafflecopter form and Post a comment to this Q: The characters in this book go through a tornado together! What’s the worst storm (snow storm, wind storm, hurricane??) you’ve ever been in?

Excerpt from Trapped with the Texan:

Is he her shelter from the storm… Or her biggest mistake?

Valencia Donovan’s plan to dazzle the wealthy investor she needs for her horse rescue start-up takes an unexpected turn when a tornado strands her with Lorenzo Cortez-Williams. Giving in to attraction in a desperate moment only makes them hungry for more. After they’ve blown away all boundaries, Valencia’s treacherous feelings for the guarded ranching heir could jeopardize her lifelong dream. But closing the deal—while walking away from their intimate affair—could cost her even more…
Book Links: Book Links: Amazon | B&N | iTunes | kobo | Google |

Joanne Rock is a USA Today bestselling author. She’s written over one hundred books, most recently focusing on sexy contemporaries and small-town family sagas. She enjoys romance for prioritizing relationships and encouraging readers to follow their dreams. A frequent speaker at regional and national writing conferences she enjoys giving back to the writing community that nurtured and inspired her early career. She has a Masters degree in Literature from the University of Louisville. When she’s not writing, Joanne enjoys travel to gather new ideas.
Website | Facebook | Twitter | Instagram | GoodReads |

« Spotlight & Giveaway: The Right Side of Reckless by Whitney D. Grandison
REVIEW: Pause by Kylie Scott »

25 Responses to “Spotlight & Giveaway: Trapped with the Texan by Joanne Rock”