Today, HJ is pleased to share with you Garrett Leigh’s new release: Unforgotten 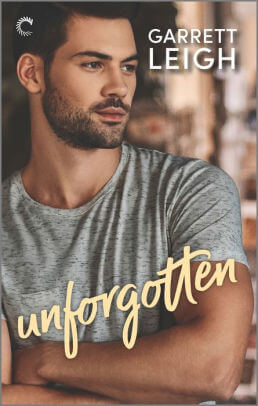 Billy Daley hasn’t been home in years, and he likes it that way. He’s just fine on his own—he has a cash-in-hand job at a scrapyard, a half-feral cat to keep him company, and many miles between him, his hometown and all the baggage that comes with it.

Until the job goes sideways. Suddenly he’s back in Rushmere, working for none other than his brother’s best friend—a man whose kiss Billy can’t seem to forget.

Gus Amour’s memories of Billy Daley are all spiky edges, lips crushed against lips and a reckless streak that always ended in trouble. But when Billy needs a place to stay, Gus steps in. He’d do anything for the Daley family, including living, and working, side by side with a man who makes his heart beat too fast and his blood run too hot—two things he’s been running from for years.

It doesn’t take long before their easy banter, lingering touches and heated glances become a temptation too hard to resist. But falling into bed and falling in love are two different things, and love has never come easy to either Billy or Gus. Only when fate threatens to steal away their opportunity for a second chance will they realize they don’t need easy.

They just need each other.

Enjoy an exclusive excerpt from Unforgotten

Excerpt. ©Garrett Leigh. Posted by arrangement with the publisher. All rights reserved.

Garrett Leigh is an award-winning British writer, cover artist, and book designer. Her debut novel, Slide, won Best Bisexual Debut at the 2014 Rainbow Book Awards, and her polyamorous novel Misfits was a finalist in the 2016 LAMBDA awards. She was again a finalist in 2017 with Rented Heart. In 2017 she won the EPIC award in contemporary romance with her military novel Between Ghosts and the contemporary romance category in the Bisexual Book Awards with her novel What Remains.

« REVIEW: Like You Love Me by Adriana Locke
Spotlight & Giveaway: The Virgin Hunt Games volume 2 by Mel Teshco »