Today it is my pleasure to welcome romance author Avery Aster to HJ! 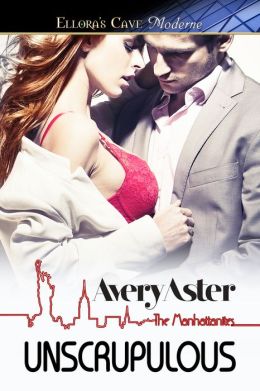 Book 2 in The Manhattanites series, At thirty-three, Warner Truman is one of the richest men on the planet, a spa mogul who buys and sells resorts at will. He holds powerful executives’ careers in his well-groomed hands. Nothing is beyond Warner’s reach…until he meets her. Stunning, tantalizing and perverse, Taddy Brill captivates Warner’s carnal desire like no woman he’s ever met. A self-made millionaire, Taddy is tougher than steel, more brilliant than diamonds and, at twenty-seven, she’s never depended on a man for anything…until she meets him. The more Taddy plays with Warner’s affections, driving him to erotic heights, the more she is confronted by a dark past. Before she can love him, Taddy must meet her worst fears head-on or risk losing it all, including herself.

Number Five is from chapter: Suck It, Blake Morgan

The set up: Taddy has just come back from having a romantic weekend with Warner in Cannes, France. Her co-worker and best friend Blake Morgan is trying to get her to confess to her latest romp.

“I’ve never seen your ass up s-o-o-o high. Your tush is grazing the popcorn ceiling.”
“It’s called squats. Suck it.” She turned around to show him what he envied. “Come with Lex and me to Gilad’s Pilates studio and you’ll get a better butt too.”
“And your long legs are spread a teensy bit farther apart.”
Crossing one foot over the other, she put her hands on her hips. “Ah-ah-ah.”
View Spoiler »“Taddy Brill—you reek of a good ol’-fashioned face fucking.”
“Ha?”
“A clit shaking!”
“What?”
“An ass pounding.” His voice was filled with envy as he clapped his hands together, causing her to flinch.
“I told you I worked this weekend, Mr. Morgan.” Taddy’s nipples pebbled just thinking about what pleasure the last forty-eight hours had brought her.  « Hide Spoiler

Number Four is from the chapter: Rubies Return

View Spoiler »Red, I’m going to fuck you. He visualized Red taking to his dick with the same pleasure she’d taken to his touches, kisses and affection for her. She’d lick the head’s slit, moving her juicy lips over the mushroom tip until he was rock-hard. Yanking on his balls, she’d stare at him with those captivating green eyes, hungry. Warner would hold her beautiful face in his hands, guiding her mouth over his shaft, helping her get comfortable. You want to taste me? You like my pre-cum, baby?
Warner jacked harder under the sheet.
He’d roll over, massaging her clit’s hood with his fingers. Warner would bring himself down over her, enjoying her moan in his ear, her pleasure, and he’d thrust fast and hard. It would be for her. Having her in his arms would be her experience. He’d drive into her vagina, sensing it throb and swell around his dick. Her slit swelled in response, she’d tighten her hungry cunt around him, ready to come.
“Fuck yeah.” He fisted his dick, throwing the sheet to the floor.
Biting his neck, she’d scream in bliss for him. Warner would lift her ass and get underneath. She’d climb on top, ride him, her vagina hugging his cock. He’d bury his face in her breasts and tug on each rosebud gently with his teeth. His body would thrust, drill and spread her ass apart with his seed. Red would hold on for dear life as she came while he flooded her with his cum. You wanna come. Come on, Red, I have you, let go, come.  « Hide Spoiler

The set up: Taddy Brill and her personal assistant Kiki are at work in Times Square. Their professional talks are most unprofessional while discussing their favorite pastime…pornography.

Number two is from the chapter: Per-fucking-fection

The set up: Taddy Brill is meeting Warner Truman for the first time. He’s talking to her. He’s turning her on. She’s getting…worked up.

View Spoiler »Nipples firm and clit dripping, she fought the urge to release the pleasure she experienced with words. They didn’t exist in the English vocabulary to describe the party going on in her mind. She tripped high on his Big Daddy ecstasy. Being in his arms wasn’t a walk through her beloved Central Park. It was a psychedelic journey in Candy Land with a race to her pussy castle. Taddy fantasized she was Princess Lolly, skipping to her own tunes, in the honey clouds. Engrossed with enthusiasm at the pleasures before her, she followed her desires where they took her from one adventure to the next. Indeed this Big Daddy held the powers. He became her King Kandy. And together they danced through her Gingerbread Plum Trees. Snap the flip out of it, Taddy Brill.  « Hide Spoiler

Number one is from the chapter: Dom Perignon Rosé

The set up: Warner has come over to Taddy’s penthouse and tells her he’s in love with her.

Stepping forward, he tilted her chin, studying her face. “I love you, Taddy.” He placed his lips over hers, allowing nothing between them. Sinking his tongue into her mouth, he claimed her as she’d always dreamt.
Face tingling, palms itching, heart jumping, she confessed, “I love you too.” A happy cry broke from her lips.
He undressed her. “I want this to work.”
She closed her eyes and lifted her hands in the air, turning around as he removed her blouse and skirt. She realized no one had ever said they’d loved her—at least not out loud. Not her parents, friends or her employees. She’d verbalized love to them all but never heard it in return. Love sounded better than music. It felt better than words. Warner was love.

Giveaway:  Digital copy of Undressed, sent via either B&N or Amazon, winner’s choice.

To enter Giveaway: Please complete the Rafflecopter form and leave a comment for Avery. What did you think of the excerpts provided above?

Content Warning: due to graphic sex scenes, strong language, suggestive themes, mature humor, and just about everything your friends ever told you not to do–including getting vajazzled, this novel is for adults only.

At thirty-three Warner Truman is one of the richest men on the planet, a spa mogul who buys and sells resorts at will. He holds powerful executive’s careers in his well-groomed hands. Nothing is beyond Warner’s reach…until he meets her.

Stunning, tantalizing, and perverse, Taddy Brill captivates Warner’s carnal desire like no woman he’s ever met. A self-made millionaire, Taddy is tougher than steel, more brilliant than diamonds and, at twenty-seven, she’s never depended on a man for anything…until she meets him.

Milan’s notorious playboy, Massimo Tittoni, seems to have everything–Lamborghinis, exotic women, palaces throughout Europe and business success. Ramping up his fabric company to go global with a new apparel brand, he ruthlessly stops supplying fabrics to the American client who inspired the collection. But once they meet, what’s he willing to give to get her in his bed?

Inside Scoop: Though the hero and heroine remain monogamous, their Prada-wearing friends indulge in a ménage a trois and other fashionable sexual fun and games

Add Unsaid (The Manhattanites #3) to your TRL on Goodreads

Add Uncensored (The Manhattanites #4) to your TRL on Goodreads

**** Please follow the Rafflecopter directions at each stop. Full Terms and Conditions are located on the widget. ****