Today it is my pleasure to Welcome author Evelyn Sola to HJ!

Hi Evelyn and welcome to HJ! We’re so excited to chat with you about your new release, Unwrapped! 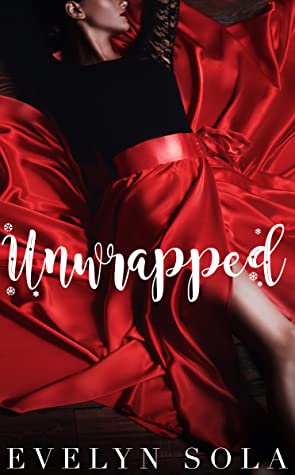 The book is about the magic and wonderment of Christmas. It’s about life happening to you when you least expect it. We always think we’re in control of our own lives, but sometimes things happen that are beyond your control. We can say we don’t want or need love, but Unwrapped is about what happens when love finds us.

“Thirty-six! That’s older than I thought. Holy shit!” I yell. “Do you realize when I was thirteen you were already twenty-six?”

I started writing a different book for this holiday story. In that story, the heroine’s father owned a toy store, which was bought out by the hero. That story grew to be too much for a fun holiday story, so I shelved it. I think I’ll go back and complete it, but not as a holiday story.

I love how they are so different from each other. They are different races and come for different socioeconomic backgrounds. She’s outgoing, and he’s reserved. She loves all things Christmas, and he doesn’t. There’s a bit of an age gap, and a forbidden quality to their romance, but they just can’t stay away from each other.

Yes! The scene where the hero gets caught with the heroine made me laugh so hard. To give some background, the heroine’s mother works for the hero, and she does not like her boss. The hero and heroine embark on a secret relationship, and before they can come clean to her mother, she finds them in a very compromising position. Here’s a sneak peek.

I turn my head, still buried in her daughter, to find Mona standing at the door, screaming as if an ax murderer has her cornered. The plate of food she has in her hand falls to the floor and she puts her hands to her face as she looks on. She then lifts one hand to cover her eyes, all the while screaming at the top of her lungs.

In my haste to get off Miranda and shield my naked body from her mother’s eyes, I roll off the bed too fast and fall on my bare ass, giving her a clear view of my dick and balls. I stand up, using my hands to hide myself from her. Her eyes widen before she quickly squeezes them shut as her screams escalate.

Read this book because it’s funny. Read this if you love the magic of Christmas.

I’m in the editing phase of a second chance romance, which I hope to release around February or March of 2021. After that, I might either focus on the book I talked about above, the book that was originally going to be my holiday story, or I might start something new. The hero in my second chance romance has a brother, so who knows?

Giveaway: Giveaway for one lucky winner: $5 Amazon GC & an e-book copy of Unwrapped.

To enter Giveaway: Please complete the Rafflecopter form and Post a comment to this Q: What is your favorite trope? What kinds of stories are you looking forward to reading in 2021?

There are many rules to follow as your mom’s guest at the company holiday party.
Rule one – do not, under any circumstances, find the new boss so attractive.
Rule two – definitely do not undress him with your eyes.
Rule three – if he slips you his phone number, throw it away. I repeat, throw it away. Who cares if just one look into his blue eyes makes you want to drag him underneath the nearest mistletoe?
Rule four – when you show up at his house the next day, do not let him kiss you. Your lips are meant to say good-bye.
Rule five – at no point should you let him take off your clothes like he’s unwrapping his sexy Christmas gift. And moaning will only make it worse.
Rule six – rule six is a bonus rule, so pay attention. Forget rules one through five.
Book Links: Amazon | B&N | iTunes |

A Boston native, wife, mother, and wine enthusiast. If she’s not writing, thinking about writing, you will find her with a book in her hands. While a new publisher, she’s been writing for years, and she will continue to write for many years to come.

Evelyn is obsessed with assertive and confident men who will stop at nothing to get their woman. Her stories are filled with love, passion, and humor.