Today it is my pleasure to Welcome author Leslie A. Kelly to HJ! 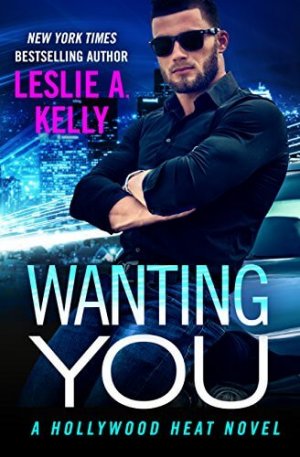 When I am asked what my favorite scene is in any book, I usually feel like I’m being asked to choose my favorite child. It’s impossible!

But with WANTING YOU, my new release from Grand Central Forever Yours, I found the task a little bit easier. One scene popped to mind, because I think it illustrates something I’ve been trying to capture in my career for a long time.

The book is suspenseful, edgy, dark, as well as being romantic and sexy.

I wrote dozens of light, funny, sexy contemporary romances for Harlequin, and then went on to write super dark romantic thrillers. Readers often asked me how I could do both, what separated them in my mind?

The truth is, I don’t think a book has to be exclusively one thing or another. Finding lighter moments in an otherwise dark world is just part of the human experience. So why can’t it be a part of the books we read?

The first book of my Hollywood Heat series, WATCHING YOU, was funny because of the heroine’s sharp, sarcastic personality.

WANTING YOU has those moments, but they come primarily because the hero is just such a wonderful, warm, awesome guy. Rowan Winchester intentionally tries to lighten moments for Evie Fleming, whose job keeps her immersed in dark deeds and twisted crimes.

Having humor evolve out of Rowan’s character, seeing that he’s not too “manly” to tease her and try to make her smile, even in the darkest of places, (umh, yeah, this is one dark place!), is what this scene is all about. And I’m very happy with how it turned out.

Giveaway: eBook: WANTING YOU (Hollywood Heat) by Leslie A. Kelly

To enter Giveaway: Please complete the Rafflecopter form and Post a comment to this Q: What do you think? Are you okay with chuckling a bit in your dark romantic suspense novels?

A cold case is suddenly too hot to handle
Police officer Rowan Winchester wants nothing to do with his family’s A-list Hollywood legacy. Working with the LAPD is his way of atoning for the Winchesters’ dark and secretive past. And, right now, the last thing Rowan needs is true-crime novelist Evie Fleming nosing around the most notorious deaths in Los Angeles – including the ones that haunt his own family.

To make things worse, he’s torn between wanting the wickedly smart writer out of his city… and just plain wanting her.

While researching her latest book, Evie suspects that a dangerous new killer is prowling the City of Angels. Now she just has to convince the devastatingly handsome cop that she’s right. Soon Evie and Rowan are working together to try to find the killer, even as their attraction ignites.

But when the killer hones in on Evie, she and Rowan realize they’ll have to solve this case fast if they want to stay alive.

Leslie Kelly is a New York Times and USA Todaybestselling author of more than fifty novels and novellas. Known for their sexy humor, Leslie’s books have been honored with numerous awards, including the National Reader’s Choice Award, the Aspen Gold, the Golden Quill, the Write Touch, the Romantic Times Award, and four RWA-Rita nominations. Leslie is also a Career Achievement Award winner from Romantic Times Magazine.

Although she has spent most of her life in Maryland and Florida, Leslie currently resides in Colorado with her husband and two fluffy, yappy little dogs.

24 Responses to “Spotlight & Giveaway: Wanting You by Leslie A. Kelly”