Today it is my pleasure to Welcome author Margaret Brownley to HJ!

Hi Margaret and welcome to HJ! We’re so excited to chat with you about your new release, The Outlaw’s Daughter! 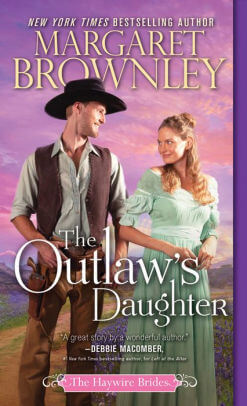 All her life, Ellie-May has been treated as an outsider because of her outlaw father.
Then the unthinkable happens. Her husband and father of her two children dies a heroic death. As the hero’s widow, she’s now been given the status and respect previously denied her.

But when Texas Ranger rides into town accusing her dead husband of having robbed a stage, her newfound status is threatened. Determined to save her son and daughter from being known as the outlaw’s children, she works to prove the Ranger wrong. But her efforts are thwarted when she discovers the stage’s stolen money beneath her front porch.

Texas Ranger Matt Taggert has good reason to believe that Ellie-May’s late husband was involved in as stage robbery and that the money is still stashed on his farm. But when he arrives in town, he discovers the thief has become a local hero…and his beautiful young widow isn’t about to let some lawman tarnish her family’s newly spotless reputation.

The story is about how people are often judged for things over which they have no control. Ellie-May’s father was an outlaw and she carried that burden on her shoulders throughout her childhood. Her worst nightmare is that her children will be subjected to the same fate if it becomes known that their father wasn’t the hero everyone thinks he was.

Giveaway: A paperback copy of The Outlaw’s Daughter by Margaret Brownley

To enter Giveaway: Please complete the Rafflecopter form and Post a comment to this Q: Has there ever been a time that you or someone you know has been unfairly judged?

Texas Ranger Matt Taggert is on the trail of a wanted man. He has good reason to believe that Ellie-May’s late husband was involved in a stagecoach robbery, and he’s here to see justice done. But when he arrives in town, he discovers the thief has become a local hero…and his beautiful young widow isn’t too happy to see some lawman out to tarnish her family’s newly spotless reputation.

Ellie-May’s shaken by her encounter with the Ranger. Having grown up an outlaw’s daughter, she’ll do anything to keep her children safe—and if that means hardening her heart against the handsome lawman’s smiles, then so be it. Because she knows Matt isn’t about to give up his search. He’s out to redeem himself and find proof that Ellie-May’s husband wasn’t the saint everyone claims…even if it means losing the love neither expected to discover along the way.

New York Times bestselling author Margaret Brownley has penned more than forty-five novels and novellas. She’s a two-time Romance Writers of American RITA® finalist and has written for a TV soap. She is also a recipient of the Romantic Times Pioneer Award. She makes her home in Southern California. Visit her online at margaret-brownley.com.
Website | Facebook | Twitter | Instagram | GoodReads |

« Spotlight & Giveaway: Meet Me in Montana by Debra Salonen
REVIEW: Claimed by a Steele by Brenda Jackson »

29 Responses to “Spotlight & Giveaway: The Outlaw’s Daughter by Margaret Brownley”